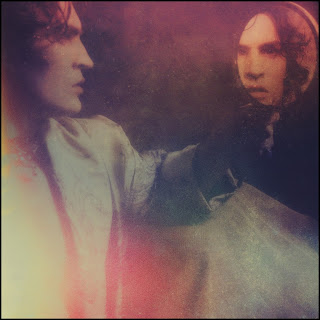 From The Picture of Dorian Gray by Oscar Wilde

Romanza, the latest fragrance from the talented and dashing Masque Milano boys Alessandro Brun and Riccardo Tedeschi is a glorious, swooning descent into exquisite malignancy.

Ovid’s Metamorphoses tells us the tale of a beautiful hunter called Narcissus, obsessively loved by the wood nymph Echo who followed the boy through the mountains. Realising he was being followed shouted…’who’s there?’..

‘Who’s there? shy Echo shouted back. When she revealed herself, she was spurned and devastated, fading away to just her voice… an echo. Nemesis, the goddess of revenge lured the arrogant youth to pool of still mirrored water where he fell in love with his own reflection. When he finally realised his aching love would not be reciprocated, he died and was transformed into the narcotic, waxen bloom that so many of us love.

This myth of obsessive all consuming love is a powerful concept. It is a psychiatric disorder indicated by differing degrees of severity. True narcissists are terrifying, fabulously charming and intoxicating but brutally cold and capable of astonishing emotional cruelty. Still, somehow we find them magnificent, alluring and sexually compelling. Like blue glittering fire, we feel the need to stand close, despite the fact we may be consumed. They have hypnotic vortex.

I will admit to a certain preoccupation with narcissism..it bubbles beneath my surfaces. I have aged well, despite an early life of raged, dangerous excess, but I admit to tweaking and toying with the aging process but am perhaps perversely obsessed with the contradiction between trembling lit human interiors and the architectural structures of the face. I have loved a fair number of narcissists in my time; it is a war of simmering competition and petty corrosive jealousies. You are corrupted, bloomed reflections of one another, desirous of love, yet loathing dependency and capable ultimately only of really loving yourself. And yet, the experience is a cathartic one, the lure and addiction of such forceful confidence is sometimes hard to read and even harder to resist until it is too late and the damage wrought. One worships rather than loves. One follows, stalks and obeys. And who hasn’t done that in their love-soaked lives..?

Romanza is easily discernible as the Italian word for romance and the scent has a subtitle of Victorian Narcissus that shadows the seeming frivolity of the main title. Yet the definition of romance is the emphasis of emotion over sex and libido, it implies a dramatic, literary tone entirely in keeping with the Masque Milano operatic theme already set down by Riccardo and Alessandro in their collection of dramatic aromatics. The original working title for the perfume was Innamoramento, a very particular Italian word used to describe the moment you are actually falling in love.. I love this concept and onomatopoeic word, but I accept the decision to shift to Romanza, a much more immediate and globally contextual name and one with a delightful, slightly vintage vibe.

The lightness of the word does however stand in stark contrast to the rather queer and compelling secrecy of the floral oddity of Romanza. The subtitle of Victorian Narcissus celebrates the contradictions of decadence, the perverse Victorian standards of outwardly maintaining moral order at all costs whilst in many dark, swirling, hypocritical cases living lives of darkness, ragged morality and chance. The succulence of pornography was celebrated in secret books and art, brothels exploded in extraordinary numbers; sexual parameters, fetishes and predilections seemed boundless.

I have always been fascinated by the rather disturbing dichotomy of the Victorian age, the twin rivers of respectability and decadence running one over the other, barely touching, fuelled by an empire saturated in money, trade goods, gin, opium, poverty, obscene wealth and a rapidly exploding population. Glittering through this was an aesthetic and arguably frivolous vein of artistic creativity, preoccupied with the senses and the pursuit of pleasure. The presentation at once of respectability while beneath the surface bloomed a bright, sad floral craving for depravity, loss, corruption and damnation. The shedding of society’s norms like so many laundered white shirts and starched blinding collars.

Romanza has a profoundly unsettling sense of swoon, a lick of enticement that lulls the senses into a barely concealed ambush of abandonment. There is a sensation of piercing violation and relinquishment as the complex build of notes dirties down and the startling will o’ the wisp assembly of notes lies down on the skin like a velvet cathouse of weary whores.

‘Behind every exquisite thing that existed there was something tragic.’ Oscar Wilde, The Picture of Dorian Gray.

There is a danger in reading The Picture of Dorian Gray when you are too young, it is text that infiltrates and troubles the soul. It is oh so hard to shake. I have never quite lost its impact. I first read it when I was thirteen, a little too young I guess, but I was obsessed with vampires and such like and the alluring concept of eternal beauty. I knew it was a book I had to read. The idea that one could be so brazen and debauched and yet hidden away in a room somewhere on high, an image terrifyingly aged for you just mesmerised me. I always found shattering pathos and a shuddering frisson of delightful darkness in Dorian’s beautiful descent. As Wilde’s public trial and humiliation unfolded his only novel become both condemnation and rallying cry. A metaphor for Wilde’s double life, the narcotic chase of pleasure and experience across time and landscape by Dorian as those around him whither and fade the story is powerful, addictive and oddly desirous.

Romanza echoes Dorian’s exquisite tragedy with the use of a quite incredible narcissus motif. It is such an odd and alien bloom, bright, unctuous and at the same time sly and disturbingly shrill and carnal. I have always had a somewhat ambiguous relationship with it as a full-blown note in scent as it is rarely done with any real credibility. The limited harvest edition of Fleur de Narcisse by L’Artisan Parfumeur (nose Ann Flipo, 2005) made from Lozere daffodils was stunning, shot through with hay absolute and a bitter, feline cassis note. I have come to love despite myself, the Eau de Narcisse Bleu cologne at Hermès, one of the oddest things I’ve come across; an acerbic, smoky grey Jean-Claude Ellena creation that seems to smell all at once of watercolour paint, artichoke, wet slate, grass and creamy green hyacinth. It is a masterly scent and one that still challenges me each time I wear it. Master Perfumer Bertrand Duchaufour turned his hand to the narcissus earlier this year at British brand Penhaligon’s, creating Ostara, arguably the most inventive scent the brand has launched since its more innovative days of Sartorial and Amaranthine. Both of course by Duchaufour. Since the brand buy out by Puig in January the brand’s days of interesting scent making and innovation are long gone I feel. Ostara was launched rather awkwardly with overblown department store style windows and fussy packaging masking a truly innovative solar narcissus. Bertrand used the traditional triangular construction of the scent to take the senses on a journey from bulb to bud to bloom. The narcissus was embedded in a beautiful surround of beeswax which smelled like spring pollen. Cassis bud and a ravishing ylang note in the drydown made Ostara feel oddly erotic and offbeat on the skin whilst celebrating the glittering white sun of spring and the sappy explosion of post winter flora. Bertrand was born in the Auvergne and the daffodil and jonquil are flowers of his childhood. Knowing this, the poignancy and visceral caprice of Ostara make beautiful sense.

The top part of Romanza is actually rather shocking, plant blood, broken stems, melding into an electric chrysal efflorescence.  A slow acting poison, the dissolve of a woozy pill in decadent juice, the scent of sneering arch lips on cold pale skin. Absinthe and orange blossom glitter like Tiffany glass amid the vibrant vampiric opening salvo followed by a really lovely interjection of anisic calm from the angelica. This serves as a calming analgesic over the fusillade ambush opening.

The aching swoon is in the heart, it is where Romanza enraptures. The hedonist bouquet of plush violet, narcotic narcissus and mucky ancient hyacinth, the forever scent of a thousand woodlands. This central woozy heart-piece is magnificent, both sullied and sweetly ambiguous. You feel transported to a lush, lullaby-jolting carriage, wrapped in silks and fur, your senses teased from you by men of impeccable beauty and aromatics. There are words, whispers, kisses and bared skin. The rhythms of the carriage are measured in laughter and the dirty soak of smeared jonquil rising like fire from exposed wrists and throat.

Both the violet and hyacinth have been created with dazzling virtuosity, especially the latter, built from jasmine absolute and jasmine sambac that enhance the creamy drama of the narcissus. The inherent powdered nature of violets lends an underlying disturbance to the floral zing and suggestion of mucky coitus that seeps out as the notes drop into flesh. In the later stages the base symphony of civet, tawny ambers and myrrh suggest a whisper of illicit sex, a pissy golden redolence that just fucking entranced me. Romanza is perverse; it’s the weird narcotic nature of the bloom, the alluring struggle in the olfaction between toxicity and indolic pornography. It is a scent of precipice and secret, mask and careful desire.

I imagine Romanza will horrify a lot of people. So be it. Alessandro and Riccardo have never been afraid to tackle complexity and thematic foible. They have always been generous and cunning with their perfumed collaborators. Cristiano Canali’s other notable creation is the highly praised Fundamental for Rubini made with Ermano Picco. It is a very strange and unique scent with a powerful suggestion of grape harvest, wine lees, rubbed dirty leather collided with Tuscan iris and fatty, hormonal beeswax.

Canali is one of a new school of young Italian perfumers along with Meo Fuscini, Antonio Gardoni and Luca Maffei who are reshaping the dynamics and textures of European niche perfumery.

Romanza is a perfume of bruised and confrontational beauty. For some it will be solace, to others a mirror, to others a weapon of glorious green seduction. It is camp, effusive and yet at times I find it gloriously claustrophobic, petulant and erotic. It would be remiss to think of it simply as a soliflore, the narcissus is a potent force, transforming the skin into a mirror of lickable compulsion. The drydown is languid and seems to last for ages, my skin radiates it like simmering chartreuse fire. The final bittersweet moments are waxen and coldly earthen with just enough sunlight streaming across the notes to entice a final satiated smile.

*title image taken from 'A Portrait of Dorian Gray' by Karl Lagerfeld, published by Steidl, apped respectfully by The Silver Fox

For more information on Masque Milano, please click on the link below: