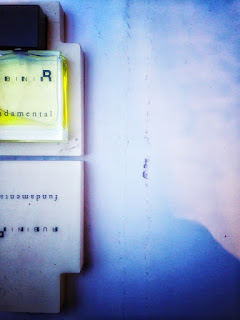 It has taken me a little while to get around to writing down my thoughts on Fundamental Eau de Parfum by Rubini Profumi. I was very kindly sent a sample by Andrea Bissoni Rubini when the scent initially launched at Pitti 2015 and it fascinated and charmed me then. It is very much an Italian affair, created by Andrea, in collaboration with Ermano Picco, blogger at La Gardenia nell'occhiello, perfumer Cristiano Canali and renowned designer Francesca Gotti who created the singular presentation for Nu_be, another innovative Italmian niche brand. The mix of personnel is quietly and distinctively a family of perfumed immensity and quite the platform for a debut scent.

I have become quite addicted to Fundamental’s unexpected and compelling grape note; it smells yeasty, fatty, smeared and indulgent. Shifting from sparkling party bubbles, the bread and melon hit of prosecco to a more disturbing lolling, after-hours addiction of vampiric carmine stain; there is unwashed skin, a whiff of fuck and silence, falling make-up, lipstick, cologne, tradition and innovation. All of these disparate elements swirl around that central personality of Soave grape. It is quite an experience.

So much time is spent writing about lost scents and houses attempting to shore up their crumbling foundations. There are also many faux-vintage olfactory formulae out there, offering cracked windows into bygone eras with mixed results. Fundamental is a very different creature. Andrea comes from a line of established Veronese perfume sellers, so his blood is scented, but he was restless, aromatically fatigued if you like, looking for something amid the usual flacons that would inspire him. He set out to create his own scent, an odour that satisfy his vintage cravings but also represent something modern, constructed and singularly apart from anything he had experienced to date. Could he build a fragrance that might echo with history and geography and yet still resonate with a contemporary set of complex and fickle senses?

The name Fundamental is key to this scented endeavour. Andrea’s grandfather started up a small perfumery business in Verona in Northern Italy in 1937 after returning from the Italo-Ethiopian war. The word translates variously as crucial, intrinsic, supporting, base or foundation. His grandfather’s name was Pietro, the Italian word for stone. His post war perfumery business was literally the cornerstone of the Rubini family. Fundamental is Andrea’s homage to his grandfather’s memory but also a way of saying.. ‘This is my foundation, I place this olfactory object in place and mark a new Rubini beginning..’

In order to achieve his dream, Andrea set about assembling a talented and relatively green squad of collaborators to help him realise his Fundamental project. La Gardenia nell’Occhiello is an Italian perfume blog hosted by Ermano Picco, a man who knows a lot about the history and traditions of perfumery. Andrea consulted with Ermano in order to create a detailed brief they might start with. Using this, they contacted Cristiano Canali, a young graduate from the ISIPCA in Paris who Andrea had previously met at Pitti when he was showcasing a selection of the Osmothèque’s classic canon of perfumery.

Between them they produced a detailed blueprint for a picturesque scent that would draw on many influences including local history, sex, wine, beauty and classical perfumery. An ambitious project but one with genuine emotion and character soaked into it every part of its ambitious formula. The result, Fundamental, is one of the most unconventional perfumes I’ve worn in a while, parts are gorgeously comforting, echoing things I’ve worn before or smelled on others over many years of wearing so many scents and yet… there is this whole other facet to the build; an edgy, sexual, smeary quality, hinting at vintage brothel skin, unwashed, layered in soap and hazy heady musks and boudoir florals. This is tempered by flashes of masculine cologne, a bite of cold citrus and pale wet verdancy.

This is a fertile backdrop for the main story of Fundamental, the surprising central motif of grape, the Garganega grape to be more precise, used predominantly in the production of Soave white wine, a specialty of the Veneto region around Verona. A lot has been written about the uniqueness of this grape note. I do however have another perfume tucked away in my collection that uses a grape note rather beautifully, albeit in a completely different way and that is Wilde by Jardins d’Ecrivains. It is interesting counterpoint to Fundamental. I am a big of the eccentric literary inspired scents from the talented Anais Biguine. I have Wilde, George, Junky, Marlowe and La Dame aux Camélias in my collection, all of which fascinate and captivate me when I wear them.

Wilde is deeply odd, a resolutely effete mix of moribund fig, carnation, oakmoss and vetiver. The recipe is at once immensely vintage in tone and yet wildly unconventional, the dance of fig and grape executed with grace and singular eccentricity. The grape effect smells of Concord grapes crushed in a stonemason’s dusty hand. It is this distinctly weird vineyard thing that really possesses the skin. It feels like a note of recklessness in a scent of studied convention. I like the old-fashioned soapiness that filters through as well; this must be a heavy dose of white musks in the base or aldehydes dazzled through the central part of the materials. The thing I admire about Wilde is that Anais has thought carefully about how to compose her love letter to Oscar and chose a leftfield motif like grapes to represent wines, excess, Bacchanalia and the ancient Greeks. Whatever the reason it has been stylishly mingled with other notes and yet still retains a strong green fruity identity of its own throughout the settling of the scent.

Rubini’s Fundamental does something different however, setting the iconic Soave grape note on an elaborate ground of powdered skin, woods, vintage leather, grasses, wax, velvet and addictive craven body. It is a scent that begs to be searched out under clothes and deeply inhaled off the skin. The sophistication of Fundamental is quite remarkable considering it is a debut scent, but it is obvious the talents of Andrea, Ermano Picco and Cristiano Canali have combined to produce a perfume of rare intensity, reflection and personality.

Key to Cristiano and Ermano’s aromatic plotting is the accord inspired by this distinctive Soave grape blend, one of the most famous Italian white wines in the world. Soave wines are predominately made up of the local Veronese Garganega grape variety, which lends the finished alcohol a strong balance of metallic verdancy and ripened soft fruits. In Fundamental this odd, charismatic motif is held up as it were in a metaphorical glass alongside a more full-bodied luscious red wine, something velveteen, swirling in a nighttime glass amid laughter and humid glances. The Soave is the wine and spirit of Verona, an odour of furred gooseberries, apricot compote, damp artesian wells and brioche to it. If I wear a lot of Fundamental, especially at night as it floods onto cloth, there are odours of noble rot, botrytis cinerea, the strange benevolent grey mould that adds a powerful sweetness to certain wines. The smell is very particular, musty, moreish and atmospheric; I can detect it ghosting in spaces between the later notes of Fundamental. The Soave motif is an important theme compositionally and the other elements riff and bloom off it.

Due to the Italian government’s brutal involvement in the 1937 Ethiopian wars, the UN or the League of Nations as it was known at the time imposed strict economic sanctions against Italy that affected all levels of import and export. This included materials used in the manufacture of perfumes and other luxury beauty goods. The result was that many of the perfumes made at this time relied heavily on natural essences, extracts and resinoids resulting in dense dark, textured scents with little sense of ambiguity or delicacy. They were strong and bawdy, perfumes of intent and statement. Pietro Rubini would have known these fragrances, recognised the power and pull of their necessary allure. He would have sold his scented wares in the Veronese bordellos after hours to the busy ladies of the night and their clients. They could afford it. Sex always makes money. The women always wanted to smell beautiful, it was part of the job; the honeytrap and the men liked buying gifts to take for their favourite doxies. 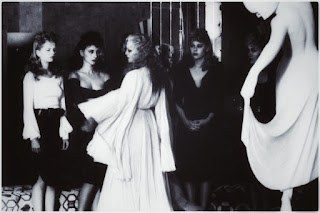 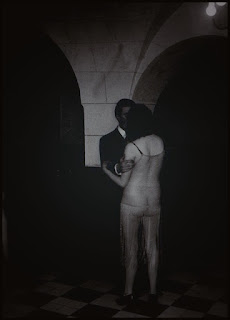 Resting at the heart of Fundamental is this incredible grape accord, the Rubini team have concocted, of course an homage to Veronese oenology but also a heritage echo of those sexy yesteryear whorehouse salutations as glittering glasses of wine were clinked and spilled over skin and whispers. I imagine the brothel cellars were well stocked with local wines to keep clients happy, crates from local vineyards resting in dark pockets of silence beneath the more gaudy and private performance spaces.

The intensity of Fundamental is striking, from the zesty, bright apricot-coloured tangerine top notes down through that startling Soave accord, shrubby maquis, silvered iris and smeared pollen-scented beeswax down to the shudder of woods, a surprisingly bracing vetiver insertion and that vaguely creepy velvet accord. There is a faint yet distinct layer of leather in the final stages, it seems to need the wax and the iris, the three elements counteracting the bready liquor spill of the Soave. Each time I wear it, it feels a little different, I sense small shifts.

One of the talking points of Fundamental from the very beginning of inception has been the innovative and daring presentation of the flacon, held between two pieces of resinous Glebanite®, a remarkable material resembling antique stone, but in fact as light as air. It is made from the recycled fibreglass carcasses of dead boats dredged up from the numerous lagoons surrounding the Italian coastline. The design of the packaging is by artist, photographer and designer Francesca Gotti, who created the beautiful, crumbling enclosures for Nu-be, another one of my favourite brands.

Her work is ruthlessly linear and I feel I see everything she does in gorgeous isolated monochrome. Her strata of Glebanite® for Fundamental feel porous and deceptively mineral to hold; beneath the tips of the fingers there are tiny pitted tracts, fissures and holes. These are part of the casting process, but they mimic the surfaces of care-worn stone beautifully. It is impossible not to handle and play with the packaging, it invites touch. The Fundamental flacon is perfectly rested between two moulded pieces of this amazing substance, coloured a calm putty grey. They are not actually fastened together in any real way and form a loose objet, which while rather unconventional in terms of perfume bottle design have a powerful presence. I find it incredibly beautiful side on; it resembles a spirit level, echoing concrete and amber. It is both joyous and unnecessary as so many beautiful things often are.

For a debut scent, with a number of complex talents involved Fundamental is superbly brave and audacious scent making. So much could have gone awry. But it has not. In fact, Andrea, Ermano, Cristiano and Francesca have triumphed; succeeding in assembling a complex skein of emotive, historical and technical threads to create a perfume of reverential depth and unorthodox fascination.

Rubini Profumi can be be found, followed & liked on Facebook: