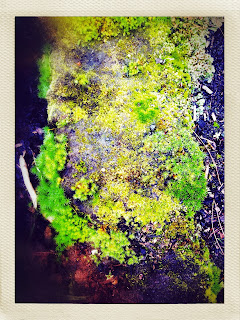 For Douglas Brown... a Portland guy, who's been waiting for me to write this for ages.... Ax.

I’m still recovering from the shock of Norne. The dirty green stickiness of it on my wrist, the oils settling like a second skin a pungent, visceral gasp of medicinal fog, dawn bark, mulch and a damp bone-touching thrill of poisoned weather. There is an imagining of vaulted green ceilings, moss-covered and ancient, canopies whispering in the dark. In dreams I wear a crown of woven verdigris branches and leaves. All around me is the smell of crushed needles rising from the forest floor like the bitterest smoke.

Did that grab you? I hope so. I am very taken with Slumberhouse, a small artisan scent house based in Portland, Oregon. I hesitate to call it perfume because I’m not sure it is. Scent design, odiferous abstraction, olfactory drama? The notes create an emotive exploration across skin and senses. There is a feral realism to the scents, constructed with an Impressionist’s eye for effect and detail. When I first smelt them I found it quite hard to imagine who these astonishing creations were aimed at, so personal were the effects.

Slumberhouse was founded by Josh Lobb and a small group of friends operating as a kind of creative collective. Slumberhouse is now just Josh with the others going their separate ways over time.  Self-taught and obsessive about every detail of his creations, Josh has assembled one of the most enigmatic and forceful collections of scents I have touched to skin in quite some time. His dislike of top notes and singular pursuit of turbulent darkness really strikes a chord. There is beautiful night and decay in the notes, the smell of fallen stones, lichen-covered trees sinking silently into haunted expanses of forests. Shadows flicker with lost souls and spirits call out in the spaces between notes. I smell magic.  Not the elven cringe of Lord of the Rings, but the creeping rise of forest paganism, the sweeping forces portrayed in Princes Mononoke. This may sound a little OTT, but when you first start nosing Slumberhouse fragrances, the impact on the senses is pretty damn forceful. 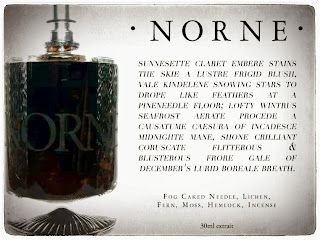 I sampled Norne, Jeke, Sova, Ore and Pear & Olive.  The line has been cut over the last year or so due to cost of materials and the rising cost of shipping. Josh has retained a core line of gripping aromas and while some diehard fans have griped about the cost rise and the loss of Vikt, Mur, Rune, Grev and Verg etc; as a hinterland perfumer most people admire the purifying of his processes.

I like the remaining core collection, for me it highlights all that is weird and compulsive chez Slumberhouse – dankness, irregularity, angst, a sense of saga and most of all a tremendous sense of beauty found in dank and murk. There is a signature: smoke…. a sweet chewed tobacco glow that rolls through the range, lending the fragrances a sense of sacrifice, fumes offered up to the skies from willing skin. An echo of the very beginnings of scent and perfume, per fumum.. through smoke.  Even the malleable cocoa glitter of Ore has a passing whiff of jazz age cigarette.

Josh played with synthetics and essential oils in his early creations, searching for a means of olfactive expression to suit his eclectic and curious nature. In several interviews he has mentioned not wearing scent when he was younger. I think in many ways this was a big advantage when it came to re-creating favoured odours and influences the Josh Lobb way. Unencumbered by formal training or the expectations of what he should be achieving and indeed producing, the hard-learned alchemical experimentation has allowed Slumberhouse to grow in secret like a culture in a cracked petri-dish in a forgotten lab. Until suddenly someone says, ‘Damn, this stuff works, it smells like Norwegian Death metal played in darkness under a canopy of shuddering pines’. 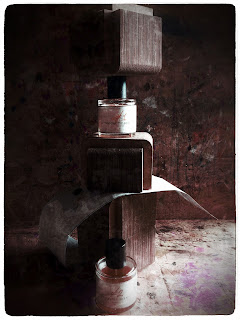 I started writing this, propped up in bed, lights dimmed, early autumnal rain morse-coding against my pitifully thin Edinburgh windows. I was warm though, under layers of comforters and a tartan blanket. There was silence, the air radiant with a halo of efflorescent jasmine hum filling the room. If it had a noise it would be crackling softly like the mutter of embers. There is that odour I always get with jasmine of rubbered plasticity, freshly cleaned fridges, and plugs. I love the naughtiness of indoles blurring a murky line between decay and desire. The raw power of jasmine has a compelling sullied undertone, a fragile odour of defilement. This disturbing attraction lies just below the dazzling surfaces of floral luminosity.

I was wearing Untitled#1 by Magnetic Scent, an artisan fragrance house based in Amsterdam. Three fragrances – Untitled#2, Tindrer and Indigo were launched in 2012. Untitled#1 was launched earlier this year. It is one of the most dramatic lung-filling jasmines I have ever put on skin. It has taken Spyros Drosopolous, the nose and artistic visionary behind Magnetic Scent over 300 mods to get his portrait of jasmine just the way he wants it. It is 50% jasmine, with a high dose of real absolutes and the rest painstakingly created from other floral and aromachemical sources. The effect is simply outstanding. The two sides of the jasmine face each like white armoured queens looking deep into mirrors, each knowing the other is there and somehow understanding the tensions held in opposite indolic worlds. For there is an unease between the real and imagined jasmines and this is needed, the slight shuddering and friction creates fire and the perfume ignites across the skin like dawn racing across needy land.

I wasn’t sure at all, smelling Untitled#1 for the first time. And I love my floral odours: roses, lilies, tuberose, jasmine and orange blossom. The counterpointing of purity and decay, indoles and sap, white creamy beauty and the slow decent into bruised collapse. I love the embedded benzyl salicylates and the skin-sullying joy of wearing huge white florals. The problem is always one of quality. Stinting on the quality of the jasmine absolutes or the technologies used to enhance and wrap the core themes and the perfume will cause the juice to collapse in on itself, smelling cheap and starchy, the promised fleshiness fading like so much mist.