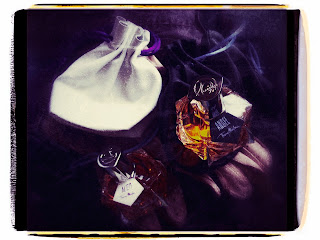 When I sprayed this new and lavishly sensual incarnation of Angel on a friend, he seemed momentarily lost and later came back to me and said it smelled of Portishead because of his emotive connections to a friend who wore Angel years ago and played a lot of Portishead at the time.

I love these synaptic firings, the strange ways we associate and layer our emotions with memories and experience. I smell aircraft fuel when I smell Opium due to the amount of travelling I did as a child and my mother wearing the classic YSL oriental to try and mask the smells of planes, the metallic hum of fuselage, the drifting smoke from the backs of planes (you could smoke on planes then….) and that very particular dry foamy smell of aircraft seating.

I have realised throughout my years of wearing Angel and to a lesser degree, Alien, how reactive these scents are, how like so much art and music they provoke extreme reactions. And yet very few people would even begin to categorise these iconic scents as any kind of art. Yet in their own way they are, created to have impact, move and divide us. Everyone I have mentioned Angel to recently has a reaction, good or bad or at the very least a distinctive memory or story to tell. I had a friend who laced her hair with it, long dark hair, that swung in heady sweet hanks around her as she moved. She permeated a room, the scent crashing against the walls like caramelised water.

Angel is 20 years old this year and to celebrate, Parfums Mugler have released another innovative quartet of flankers celebrating Angel, Alien, A*men and Womanity. Following on from the critical and commercial success of ‘The Taste of Fragrance’ quartet last year, a collaboration with Hélène Darrouze, the Michelin starred chef who highlighted notes to sublimate and ‘pop’ the four signature scents.  I loved them and bought a couple each of Angel and Alien. They are privately sublime. Angel had a massively amplified dark cocoa note injected through it and settled down like sexy mulch on the skin. Alien had buttered salted caramel oozing through it and this worked so well with the jasmine sambac that gives Alien its distinctive glowing soul.

The new flankers have the name Collection de Cuir or Leather Collection. Mugler have really pulled out the technological and referential stops with this set of scented incarnations. Collaborating with Clarins Laboratories, the Centre Tecnhnologique de Cuir and Orfeverie d’Anjou, Parfums Mugler have produced I think one of the best flanker collections in quite some time. It proves you can take classic fragrances and with careful application of imagination, technical nous and of course an in-depth knowledge of your brand produce witty and revealing depths to existing formulae.

This is the trick, to explore existing icons in a new and exciting way, unfurling new facets and perhaps if you are lucky, creating something golden and revelatory from the original motherlode. Mugler have travelled some distance from the originals, but seem to enjoy playing with the recipes. Sometimes it works, like last year’s foodie flankers, the Liqueurs de Parfums, Alien Absolue, the recent Angel Eau de Toilette, the transcendent Rose and Pivoine incarnations of Angel and the joyful tobacco and whiskey tinted A*mens. This restless reworking of thematics will always have failures, like a shattered pots on the floor of a kiln, experimentation is necessary in order to find form and function that might possibly work.

Last year’s mouthwatering quartet worked so well because of the precise application of the sublimated gourmand notes. Long accused of triggering the avalanche of gourmand trends that cascaded extravagantly subsequently through the world of fragrance, Angel in fact re-wrote the rules entirely in terms of construction and ingredients. It is hard now twenty years on to truly appreciate the seismic shock the launch of Olivier Cresp’s original Veltol and patchouli drenched oriental had.

What I admire in the evolution of the Mugler olfactory family, is the careful scrutiny of the notes and facets in each of the four classic Mugler scents and the consideration of how these aspects can be honed, twisted and re-orchestrated without losing sight of what made them unique in the first place. This is actually very hard to do. Many brands tinker with favourites and archive classics but rarely get it right. I was not overly impressed with Thierry Wasser’s attempt to modernise Shalimar with Parfum Initial. Intended as a lighter, softer, more pinkified rendition of the House classic it felt weirdly aggressive and cheap somehow, Shalimar viewed through a cracked Fisher Price camera lens.

This year’s batch of Mugler flankers are inspired in part by the traditional craft of scented glove-making, where the glove leathers are carefully and deeply cured in scented oils and then handmade has revived this classic tradition this year as part of their beautiful Collection De Grasse. The artisan gloves are scented with the House’s iconic Mure et Musc perfume.

Working with the Orfeverie D’Anjou, the world-renowned pewter specialists, Parfums Mugler commissioned bespoke Inox vats in order to soak the four fragrances with specially created vegetal leather. This note really radiates out of all four scents. It smells very different from trying to recreate a leather facet from aromachemicals. There is no bitterness or underlying tar-like ambiguity. There is a reality to the Mugler leather facet, suppleness, softness, malleability and in the case of Alien a wonderful brushed white suede effect that complements the jasmine beautifully. 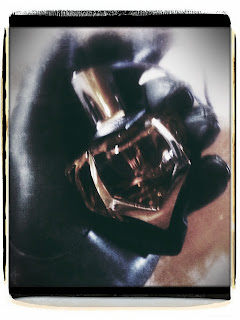 I dived in and bought two, Angel and Alien, the same two I bought last year from The Taste of Fragrance collection. I have never really been won over by Womanity. I will admit it’s a clever take on fig, marrying it with a marine breath of caviar, but I really dislike the saline undertones and the name is ghastly. I just hear womb all the time. I have never been taken with A*men, the recipe has smelled perpetually cheap, although the valiant whisky and tobacco permutations did bring new life to an increasingly dull formula. It took me a while to warm to the tobacco version though. I bought it, wore it, hated it and shelved it. Then one weird autumn day of rain and heavy hot showers I wore it and loved it, the notes fell into place and the delicacy of the smoky, amber facet gave a certain gravitas to the somewhat generic coffee, chocolate and spice combo. 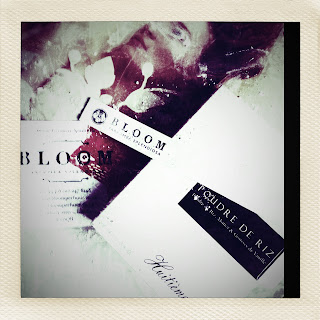 When in London for business, I like to take time to search out and sample any new and exiting olfactory offerings that have appeared an array of scented flowers to be sniffed at and maybe, just maybe find a place in my increasingly judgmental heart.

Our overheated and crammed head office is smack bang in the middle of Spitalfields in London E1. A diverse and multi-cultural area, now awash with every permutation of hipster know to man. Coffee shops and clothing boutiques mingle with bric-a-brac shops and gentrified slum housing. The air is potent with spices, concrete and traffic fumes. The area feels alive and vibrant if a little veneered and tenuous in places.

It was here a colleague introduced me to Bloom (parfumea splendiosa indeed!), a new fragrance boutique and the scented brainchild of Oxana Polyakova, which opened its doors a month or so ago at 4 Hanbury Street, Spitalfields. It feels special as soon as you walk in. Immaculately merchandised with quirky little displays and visual treats designed to draw the eye. The shop feels white and softly Scandic yet cool and welcoming. It has a Hammershoi vibe I really like; it allows the fragrances to quietly stand out. The brands they stock are chic and alluring and work well in the context of what is an intimate yet well thought out space.

‘Compared to mass-market perfume a good niche scent is what a good book is to a glossy magazine. A book has a plot, lots of characters living through a main part, a beginning and an ending.’

This statement of quiet intent from their super-cute website is a good indication of the genre of perfume Bloom sell. They have thought carefully about the luxury of the brands. And this is not the luxury of bling, sparkle and tanned flesh on super yachts but rather the unspoken richness of liquid cashmere, heirloom leather and worn, rubbed wealth. The unexpected diamond glittering on a hand covered in mud from gardening. Introverted wealth and subtlety. Sure there are some strong elixirs but Bloom is about the journey. The destination is important, but you need to slow down, look out of the window, adapt your senses, count the petals, touch the pollen and smell the atoms.

The perfumes Bloom stock include Eight & Bob, the bizarre and moreish Blood Concept scents, the voluptuous Nez à Nez (Including one of my obsessive perfumes: Atelier d’Artiste….), Koju 1575, Six Scents, Vero Profumo, Pierre Guillaume’s stunning Parfumerie Générale line and his innovative Huitième Art collection. The also stock fabulous candles including the decadent Cire Trudon, perhaps the most beautiful candles in the world and candles by Jovoy and Phaedon as well.

It is a really elegant and thoughtful library of fragrances with truly intriguing concepts for everyone to explore. One of the flaws with niche fragrance has always been the disparity between price point and perceived artistic intentions of the house or perfumer. People read marketing blurb about esoteric inspirations, obscure references and the often-difficult world of aromachemistry. This is fine if you are familiar with the more abstract and in-depth aspects of perfumery but approaching to as a novice you can often be left bewildered and vaguely patronised.

Bloom does not feel like this at all, the atmosphere is hushed and welcming. I loved the lived feel of things, the whiteness, the faded feel in the air. First impressions count for so much and I felt at home straight away. The scent in the air was subtle, temperature good; always important with fragrance shops, just cool enough to hang the molecules in the air without wrecking their meaning. I of course approved of the fox in the fireplace and the lovely storybook-style fox on their business cards.