..And Moroder Sanctified Their Disco Skin: ÉL & ELLA by Arquiste 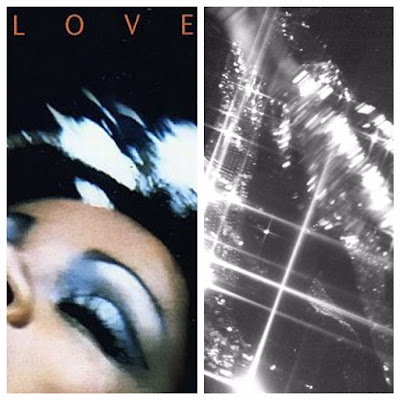 In the rear-view mirror he watched her applying lipstick from a golden tube. Her cascade of dark hair and glowing bronzed skin was illuminated by the beams of passing cars. Dressed in plunging ivory with pieces of gold at her throat and neck, she glowed like a pearl in the shadowed interior of the car.

”Eyes on the road, I don’t want to die tonight.”

The driver winked at her.

“You are as beautiful as the magazine pages señorita, my wife has your pictures cut out and saved. She will never believe you have been in my car tonight.”

She smiled as the limo glided along the brightly lit boulevard towards Armando’s Le Club. She wound down the window and listened to the tropical night. The New York shoot had exhausted her, she felt as fragile as glass. She lit a cigarette, the sound of the match suddenly flaring like a shout in the night.

The road was oddly tranquil as she watched the car disappear, the palm trees overhead brushing the sky. The bay was awash with hotel lights. I have missed this… she murmured. A sudden explosion of sharply dressed party people seemed to appear from nowhere, carnival and louche. Someone waved, she nodded and turned to look toward the ocean, hearing its wash and swell in her mind. Holding a small white glass bottle she’d taken from her purse she pulled her hair to one side, exposing the back of her neck and scented her skin feeling her senses cool in the evening miasma. A fine mist for her hair, then throat and décolleté, her skin still slightly slick with oil from an afternoon of languid sunbathing and exquisite observation from behind the biggest sunglasses money could buy.

The doorman nodded recognition. Once she was inside she felt like she had come home. She wondered how long she had been coming to Aramando Sotres’ club now, endless afternoons by the sparkling azure-tiled pool under an Acapulco sun that always seemed that little more Hollywood when she was here, glittered off the Moorish white walls and columns. The reflected heat and dense tropical foliage gave the place an eerie, dislocated feel like one of her endless photo-shoots in empty pools or abandoned zoos. Occasionally peacocks wandered poolside like overdressed visitors. She loved the emptiness of sun worship, the near-claustrophobia of stillness cut by the arrival of cocktails, gossip and sexy waiters.

Night time at Armando’s Le Club was dinner and serious dancing; dancing till dawn or until your feet gave out and then falling into the dawn light on the beach. That was one of the delirious truths about Armando’s; it ran from boulevard down to glorious beach. She smiled to her herself at memories of spinning out onto the sand, skin on fire from hours of music, laughter, collisions, kisses and sleeping under a cool rising sun. Sometimes diving into the ocean to shock away the night. She swirled her champagne around and around in her glass. It was nearly midnight. He was late.

A man came up quietly behind her and gently leaned into her neck.

“You smell of hot flowers. Come, dance with me.”

“I should bite you for making me wait so long. Where have you been?”

“Over there on the other side of the room, you see the girl in the emerald dress that sparkles like a snake? I danced a little with her, to watch you.”

She raised her hand as if to strike; he caught her wrist and inhaled her pulse point, licking softly at the surface of the skin.

“A trail of tanning oil…Sobranie…and…jasmine…”. 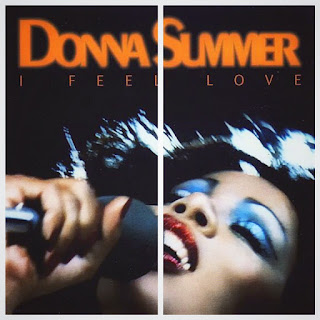 He pulled her to him, she inhaled all of him violently, a feral charge of sweat, leather and tobacco rose like smoke off his dark curling chest. The lights around them flashed off the stained glass windows and flickered like fever dream. They felt their bodies instantly react to that sliding electronic intro and the beginnings of glistening thunderous arpeggios… Ooh, it's so good, it's so good, it's so good, it's so good, it's so good… she looked to him through the strobing, rolling lights and the now heaving dance floor, everyone moving in their own sweat-tossed worlds to Donna Summer’s insistent pulsating vocals. I have come home…she said out loud, words swallowed by the music. He took her hands gently at first to find a rhythm; she realised Moroder sanctified their disco skin as their bodies flexed and curved in obeisance to the bassline. The smell of champagne and skin filled the floor.

Only the Light Moves: ‘Dilettante’ by Hiram Green 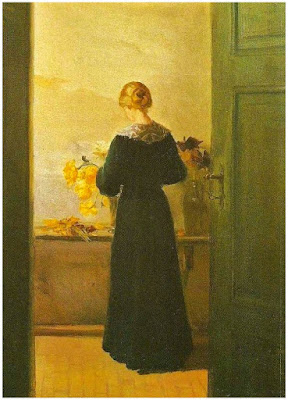 ‘We went down into the silent garden. Dawn is the time when nothing breathes, the hour of silence. Everything is transfixed, only the light moves.’

The word dilettante can often cast a slight pejorative shadow but its original etymology lies in the Latin delactare and Italian dilettare, to delight; hence dilettante, thus signifying someone who delighted, particularly in the arts. It is now used as a casually throwaway term for someone who dabbles or professes an effusive, superficial love of the arts but lacks a true understanding of any one singular form. You know something though… if I had to choose between one respective so-called expert and a ballroom full of gadfly dilettanti; give me the fun-loving, flitting, dilettanti any day. I’ve had my fill of experts. I’d rather have the laughter and hedonistic skimming.

Natural perfumery is divisive; it often seems to cause a schism of olfactive confusion, annoyance and just plain misunderstanding amongst perfume lovers. I will admit that I am not always its biggest fan and often struggle to find scents I like or that suit my senses. But with age, wisdom and illness actually, I have taken it upon myself to incrementally learn more. Now, more than ever, the natural perfumery movement is a vital and powerful part of the contemporary aromatic scene, offering up a fertile and profound mirror of alternatives to synthetics, fixatives and chemicals. It offers perhaps a more complex and raw communion with the natural world, allowing our skin to come into contact with our scented environment that artificial dilutions abstract and obfuscate.

Now, haters are gonna hate, but not all of it is good; some of it is still a tad spoiled in my opinion by an overly simplistic herbaceous strain of foraging, mountain-craft style work, sullied DIY enfleurage, an over reliance of the medicinal leanings of apothecary verdancy. Often the blending is uninspired and blocky, you can discern the materials lying together in the solvent and there is little true sense of assembly. This of course could be the point, I know from the experience of watching perfumers at work how dense and volatile naturals are to work with and controlling dosage and nuance is difficult. Maybe simplicity is the key. Repeated brushes with illness have taught me painful lessons about detaching and treating different parts of myself rather than the undeniable whole. I think reading this back and seeking a little insight from a friend that perhaps the same applies to natural perfumery, examining the agrestal, pure whole rather than focussing on the shards and immediacies. These raw materials were medicine, poison, balm, weapon and magic; their power and inherent life force has never really departed. 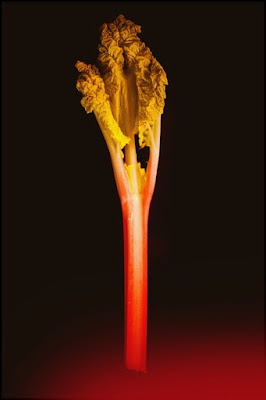 ..When Valia asked me,
'When did you first set foot in the world?',
my laugh, like a rhubarb shoot
pokes its head through the snow of my mouth…

In 2013 it was announced at Hermès that in-house perfumer Jean-Claude Ellena had chosen a scented successor. The news seemed a little shocking despite the rumours of Ellena’s impending retirement that had been drifting carefully around for a while.

Step forward Christine Nagel, half-French, half-Swiss, an elegant and prolifically stylish perfumer with some fascinating work on her CV including big hits for Maison Dior, John Galliano and Guerlain under her belt. Her most intriguing portfolio perhaps best demonstrating her instinctive nuances and clarity is her work at Jo Malone London under the seemingly relentless PR machine of Estée Lauder. Among the twenty five successful and commercially viable fragrances she has composed for Jo Malone London there are some exceptional perfumes, complex odours I have loved and admired that have at times seemed to look to Hermès and Jean-Claude’s less-is-more approach. Her swan song Wood Sage & Sea Salt in particular was an especially poignant and minimalist adieu, sparse and scoured with subtle details and speckles of observed texture. An abstracted capture of distinctly English windswept beaches, driftwood and bundled cashmere-wrapped wanderings along deserted coastal stretches. It was a bittersweet sign-off to a rather brilliant and I think somewhat underrated body of outstanding work.

Christine’s Rose Water & Vanilla, one of the original Cologne Intense series from 2010 is a scent I have loved since its launch. I was born in Bahrain and this it is nostalgic silvered Middle Eastern rose alchemy in a bottle to me. Sadly, Lauder decided to axe it from the line so I stocked up and have three 100ml dark flacons slumbering in the Foxy study. Christine’s Peony & Blush Suede was one of the brand’s biggest ever hits, a clever subtle riff on niche leather trends, sublimating it with a veil of rosy apple and drifting carnation. Iris & Lady Moore, a nice mix of powder and rubbed geranium was an unexpected delight in 2012, part of the London Bloom collection and I have always really enjoyed Christine’s foray into gourmand territory with offerings such as Ginger Biscuit, Lemon Tart and the divine Bitter Orange & Chocolate that was literally Terry’s chocolate orange in a bottle. I went through three bottles and have two more in storage.

‘The smoke’s smell, too,
Flowing from where a bonfire burns
The dead, the waste, the dangerous,
And all to sweetness turns.’

From Digging by Edward Thomas

As a writer I do from time to time receive requests from perfumers to review their scented work. I don’t pen negative reviews, so if I choose not to post my thoughts on something, it means I haven’t liked the scent or scents or found anything arresting enough in the olfactive composition or genesis to inspire me. Not everything has to be masterly or game-changing. I just need to be interested and surprised enough. On the Foxy blog I have said before I prefer to write on fragrances I have purchased, this act of simple aromatic commitment honours both perfume and perfumer. This may sound a tad simplistic but it allows me to avoid the poisonous vapours of gloomy and antagonistic reviewing.