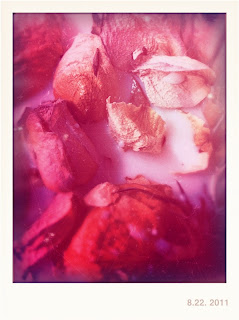 There is a photograph from my childhood of a brightly tinted group holidaying by the Red Sea on the Arabian Peninsula. The sun is low and we have our hands up to shield our eyes. Every time I look at this image I can smell roses, as if the torn and curled print itself were impregnated. Not the blowsy collapsing scent of English garden roses or the timid squeak of perfume from over-cultivated sculptural topknots in supermarkets. Not the wet neon heads shimmering in manicured gardens that puzzled me on fleeting visits home from the Middle East nor the melancholy washed fragrance of saddened petals in bonfire night gardens. All these things have their olfactory place too. But this scent… this scent is something else; ephemeral, sweet and yearning. Loukoum, halva, the soft and persistent tumbling of scented water from silver ewers into open hands. The chilled interiors of hidden houses, rooms veiled from the heat outside. Gardens and courtyards like delicate oases tucked away from prying eyes.

I travelled so much as a child memories tumble over one another but the olfactory anchors resist the ebb and flow of time's tides. That cool milky scent of eastern roses is so potent, a direct emotional link back to those early years in Saudi and Iran; hot journeys to Persepolis and Petra, swimming pool parties, air-conditioned rooms, and vast empty supermarkets. It is the aroma and taste of syllabubs, syrups and teas. Roses floating in cool water to rinse the fingers. Jewel-coloured jams, the divine marriage of almond and rose, pastries bubbling in perfumed syrups. And of course loukhoum or Turkish delight, enveloped in silky powder that billowed up as you savoured the floral melt of each bite.

All of this rush of memory has been recently triggered again by the remarkable new Rose Water & Vanilla scent launched by Jo Malone. Part of their stylish new Cologne Intense series of four new fragrances inspired by the scents and rituals of the Middle East. The other scents are Iris & White Musk, Oud & Bergamot and Amber & Patchouli. Rose Water & Vanilla is the stand out scent of the new quartet, (with the White Iris & Musk coming in a slightly distant second), and one of the sleekest and most complex fragrances Jo Malone have created in my opinion. Signed off by Christine Nagel of Fragrance Resources, it is modern, intriguing and for me, personally, a very emotional riff on sweet Middle Eastern pathos and silvered desire. I am a little obsessed by it for now. Whenever I wear it I am asked what I have on. Friends lean in, close their eyes and inhale. It makes them smile. I like my aura of poignant powder. 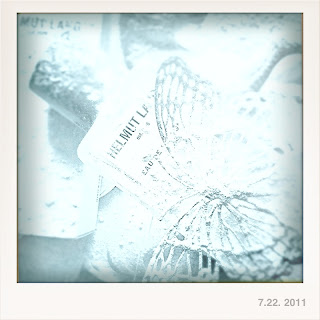 I sleep. I dream. In the dream it’s snowing. A cityscape softened by layer upon falling layer of crystals. I walk in silence, air gently swirling around me, eddies of snow lifted and swept past my feet as I move through the peaceful streets. There is no cold, no chill in my bones. The snow falls like powder, with a lightness that seems to say I am covering this pallid ground and when I am done, it will be something different, something better, something beautiful.

I come across a park, stretched out before me are trees bowed in white prayer. There is a frozen lake staring up at an alabaster sky. I breathe in the ethereal silence; a scent of vanilla and orange tinted lavender rising from beneath the snow. I am wearing white, shades of milk and silver, canescent in the reflective glow of the muffled landscape. All moisture has been stripped out of the air and the flakes dance like diamond dust. I gaze up at shapes in the sky, distant mountains perhaps. Whiteness drops silently around me like ash from a thousand volcanoes. Such huge expanses of white seem cruel and barren, but I find them immensely beautiful and soothing.
Swans have frozen over on the lake, their longboat forms moulded by snow. A horse stands still under a tree, bone white and shimmering in the low glinting light. I hold out my hands and let the snow fall, watching the crystals flutter and quake. They don’t seem to melt. Instead they disintegrate like the softest dust when I rub my fingers together. I smell jasmine, almonds, roses, the most delicate whisper of woods; all wrapped in crumbling musks the colour of bruises. My skin smells beautiful, soft and blurred; the texture of pearlescent mohair. I wake, pressing my nose into the warm crook of my arm. Traces of the scent still linger. If I close my eyes, snow falls in my room across sheets and skin. I am slowly covered like a lost citizen of Pompeii. 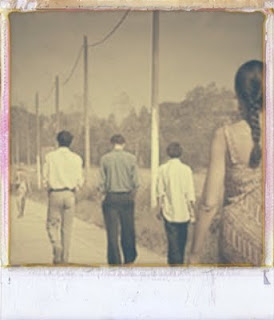 Still from Unrelated treated by the Silver Fox

I wonder how many of you have seen the work of Joanna Hogg?
She has made two films to date. Unrelated in 2007 and Archipelago in 2010.
Both films are atmospheric, poised and painfully beautiful portrayals of group and family dynamics, pain, uncertainty and social and personal awkwardness. They look like art, still and throbbing with sound and a shifting palette of muted colours. They echo with silences, unspoken pain, turmoil, secrets, frustration and lost opportunities. The characters seems real and behave with great tenderness and force. There is absurdity and pretension and wonderful bursts of warmth, humour and sensual flashes of desire that licks at the ankles like a teasing tide.  But most of all there is melancholy, a much neglected condition, rarely afforded a glance or word these days. And hardly ever in cinema, and especially British cinema. Misery yes, groaning and moaning about one’s lots in life, all very kitchen-sinky, work-related, class-riven. But this is different. More studied and cerebral.
Hogg writes and directs, allowing the cast to live and breathe the script, adding themselves in, interacting with the words, situations and dilemmas. This careful and studied interaction with her work has created a fluid reality that draws you in so close it is sometimes hard to breathe as you entangle yourself so intimately in her world.
There is discomfiture and that peculiar British embarrassment of social pain in her work that makes it so utterly compelling. As real and heartbreaking as to hear the knife scraping the bone. Hogg trained as a photographer and this ability to capture stillness and distilled intensity fills every frame of her atmospheric filmmaking. Stylistically the films have tremendous beauty. Hogg’s training has given her a potent eye. She understands the power of simplicity and quietude.
Both films are preoccupied with belonging and fitting in, adjustment and the complex and treacherous pathways of friends and family. Unrelated is set against the backdrop of a hazy Tuscan summer. Not just the Tuscany of Mortimer and Spark but the industrial dry expanses of factories and motorways that vanish from view in TV land’s romantic dramas. Archipelago unfolds during a tense family get together on the Scilly Isles, a group of strange and haunted islands off the coast of Cornwall, against a backdrop of rain, winds and dark, scudding skies.
Both films examine characters transfigured by landscape. As a fan of E.M. Forster I am always fascinated by the inner and outer journeys travelled literary of filmic characters as they come into contact with immovable external forces and emotions. Their psychological, sensual transformations are often triggered by contact with new landscapes and the components of perceived alien realities. Shocked and changed by the leaving behind of conventions and moving towards a sense of a more liberated love and life. In A Passage to India, Adela Quested’s hallucinatory experience in the Malabar caves sets her on a path that will alter her life and those around her forever. In A Room with a View Lucy Honeychurch’s collision with rugged, sensual Italy, the stabbing in the square and her kiss in the field of violets awaken, albeit painfully, a ravenous craving for love on her terms. Whenever I read Maurice it is the images of gardens, leaves and exteriors, the outside, that resonate so strongly as Maurice wanders, aching for completion away from the furnished rooms and well-lit houses of his up-bringing.
Forster said only connect....  This maxim applies to Hogg’s work. Silences between words are deafening and the veneers are paper thin. Meals are eaten, wine drunk, conversations casually manipulated, games played, tears shed. But truths are carefully shielded and if they are spilled, they have heart breaking ramifications that burst out into the open and then are swallowed up again in that terribly British way.
Unrelated is about Anna, a 40 something woman, whose relationship is in crisis. She has no kids and is one of those people who seem mildly irritating, clinging dangerously close to youth and not really moving forward, dissatisfied with things, unsure and uneasy with herself, not trusting herself to enjoy or let go. Not wanting to burden others or annoy, but by downplaying and avoiding conflict actually magnify them and only irritate more. Curiously unsexy, but oddly erotic, Kathryn Worth is extraordinary as Anna. She is in turn moving, vulnerable and infuriating to watch. Hogg wanted someone quite unique to play Anna and auditioned many different types of actresses before hearing about a neighbour of a friend who had trained as an actress and was now working on the casting side of the business.

The choice was perfect. The first time I watched Unrelated I wasn’t sure I liked Anna at all, her meekness, her apologising, her relentless desperation to fit in. She struggles to find a role on the holiday. She doesn’t want to spend time with her old school friend and her husband and is instead drawn to the unpredictable son Oakley and his mates. Her collapsing relationship with her partner is told via snatched mobile calls as Anna jogs each morning. Her uneasy movement between the adults and the older teens is tense and deeply uncomfortable at times. The trading of secrets, stories, drunken games and implied sexuality is witty, yearning and edgy but tinged with a realisation that sooner or later something will have to give.