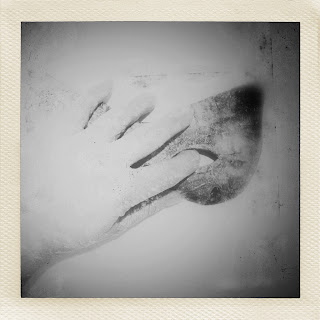 I was bemused by the suggestion on the Jardins d’Écrivains website that this sensual Cologne de Nuit is described as ‘A fragrance best worn nude…’. How fabulous.

It is a wonderful surprise on the skin, a tumble of white petals and musk with a beguiling cardamom note that adds a delicate warm skin facet I just find irresistible. With a lacy flourish of powdered strawberries, it settles down on the skin as if you have risen from an infused and voluptuous bath, lit by candles, to dress in something gathered that covers and surreptitiously reveals at the same time..

The deceptive chasteness of this fragrance plays against its own carnal intent. It is a behind closed doors scent, something for sheets and rolling seduction. I can imagine it worn on evenings across throats; décolletés and rising off perfectly exposed necks. Body heat would cause the orange blossom to warm through the heart notes enhancing the aroused skin facet. You lean into someone’s space, drop your hair, walk gently by and drape desire behind you. It’s that kind of aroma. Your own skin; enhanced and ramped to the max.

Jardins D’Écrivains is a wonderfully eccentric range of candles, perfumes and bath delights inspired by literary lions and lionesses. Literally Writers’ Gardens. A simple idea but translated stylishly by brand founder Anais Biguine. Candles include Le Jardin de Tolstoï – Iasnaïa Poliana with sagebrush, Russian leather and benzoin or maybe Le Jardin de Maupassant – Étretat with tuberose, blackberry and vanilla. The candles are housed in classic English apothecary face cream jars with screw top lids, made the same way since the 19th century. I like the conceit of literary inspiration, it is perfection. My obsession with books goes back to my childhood; my flat is towering with them. The walls groan with double and triple layers of accumulated reading. Many of Anais Biguine’s writers are among my favourites: George Sand, Colette, Karen Blixen, Oscar Wilde, Edith Wharton and Maupassant. There is something defiantly vintage about this heartfelt and elegant little house. 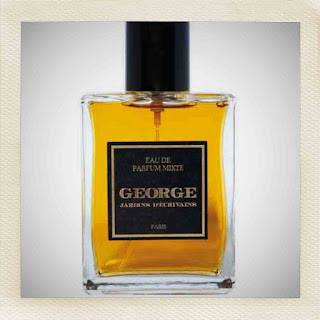 I haven’t tried George properly yet, only a whirlwind meeting last year. I remember the clever layering of coffee and tobacco notes over a sophisticated cherry-blooming heliotrope note and a controlled lick of neroli and bergamot, two notes that can often derail a nuanced composition if not appropriately matched. The notes also include weightier elements of Peru balsam, musk and myrrh. I recall it sat well on my skin, shifting from bright to shadowed, like a mood clouding a pretty face. Amantine Lucile Aurore Dupin, aka George Sand, was a notorious literary salon figure in the 19th century, combining erudition, charm and scandal. She dressed in men’s clothing, not because it amused her, but because it gave her passage into areas of society that might otherwise have been barred to her dressed more conventionally in female attire. The two sides to her nature are well played in the perfume, the darker more masculine notes worn over the more feminine ones, not drowning them either, but enhancing them, the notes going back and forth as if in erudite and witty conversation.

I initially struggled with Gigi I have to admit, it was just not my cup of tea at all. It is also one of my least favourite of Colette’s literary works. I’m no prude, but the somewhat clinical training and selling of a young woman is not an easy subject to read. On the plus side however, Colette’s evocation of the era, the minutiae of social mores make the novella a more enjoyable read than it deserves to be. But I persevered with the scent and there are elements of perfume-Gigi that are quite charming, just not quite special enough to coalesce successfully into the rounded portrait I was expecting. However, I may be doing Gigi a disservice, it smells fabulous on two on two of my girlfriends, so perhaps it’s my skin or my fear of blackcurrant!.

To suggest the wide-eyed ingénue (it is just so hard to shake Leslie Caron isn’t it?), Anais Biguine has used orange blossom but offset it with a dewy cut-grass note. Combining this with blackcurrant and white musks amplifies the freshness and frivolity of youth. Sadly I feel the jasmine and tuberose overdose the indolic bouquet as Gigi opens up her expansive heart. There is nowhere for her to go, no one to love. The basenotes are not quite robust enough to support the strength of the cheeky and vivacious opening. The scent does linger… it really does. It became a little bitter and twisted on my skin. I found it uncomfortable to wear. It was like watching someone age rapidly in front of me. 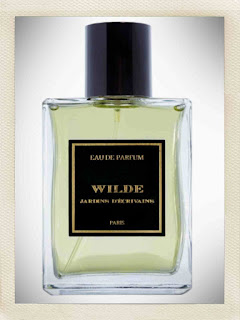 I was impressed by Wilde. It had a combination of notes that genuinely surprised me. An eccentric mix of pretension, talent and effect that plays out like a mini drama on unsuspecting skin. It is not a fragrance I would normally wear per se, but I am still playing with it, very intrigued by the fusty grape and lees note in the top that powers out of the bottle, bubbling over fig, green carnations and a splash of tea. Anchored by oakmoss and vetiver, Wilde certainly winks chypré, but naughtily across a crowded fin de siècle bar, decked out in gold and lit by hundreds of burning candles. I’m not much of a fig fan, I know people go crazy for fig scents, Premier Figuier.. Philosykos blah blah blah… but they make me feel a little queasy. I’m not sure why. But the fig note in Wilde is a little sticky and dirty, a counterpoint to the potential flamboyance of spicy carnation and that dazzling gaseous grape note buzzing around at the top of the scent. I will keep on trying it. I like a challenge. Like Wilde the man, it is full of contradictions and charming brilliance. 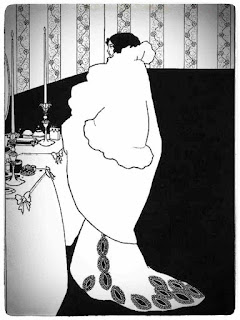 La Dame aux Camélias was written by Alexandre Dumas fils, and published in 1848. It has been adapted many times for the stage and cinema, La Dame herself played by actresses such as the Divine Sarah Bernhardt, Tallulah Bankhead, Greta Garbo and more recently the wonderful French chameleon Isabelle Huppert. Verdi adapted the story for La Traviata, changing the heroine’s name to Violetta Valéry.

The character was inspired by Marie Duplessis (1824- 1847), a courtesan who hosted a salon for literary, political and artistic figures. Aged only 23 when she died of tuberculosis, she nonetheless managed to make quite an impression on the society of the time. She had a number of lovers, including Dumas fils and Franz Lizt. 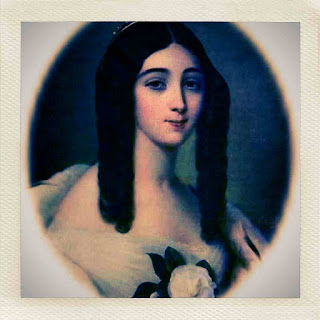 The story is simple enough, but of course deeply moral in tone. Armand, a young bourgeois gentleman from the provinces falls passionately in love with Marguérite Gautier, a courtesan of the Parisian demi-monde, a world of artists, excitement, free-spirited love and desire. But such desires have a cost. Marguérite has tuberculosis, or consumption as it was sometimes known. A horrible and highly infectious disease of the lungs and respiratory tract often portrayed romantically. TB had a very high mortality rate and killed brutally. Hardly the polite swooning death of Garbo in pretty Robert Taylor’s arms in Camille..

Armand persuades Marguérite to live with him in the countryside, leaving behind her life in the city. This she does for love. However she cannot outrun the shadows. Armand’s family, his father in particular is concerned about appearances, scandal, social mores and the effect Marguérite’s past and presence could have on the future marriage prospects for his daughter, Armand’s sister. Dumas does not judge per se, he allows the reader to listen, read and care. Marguérite Gaultier is a flawed woman, in conflict with her time, craving love and god forbid sexual desire. She feels rescued by Armand. His love redeems her, makes her virtuous. Persuaded by Armand’s father she leaves. Alone and ill, abandoned by all around her she dies. Her illness is painted vividly, a kind of romantic martyrdom. She suffers so that others may continue along more accepted paths. Armand believes till the end she has left him for another lover. It is a not a happy book, but is an important one, the character of Marguérite is sympathetically portrayed by Dumas, who is at pains to show her lifestyle as it was, a profession that allowed her a certain control and status in life, albeit still at the whims and dictates of a fickle Parisian society. One of the most fascinating aspects of the La Dame aux Camélias is the rich detail of 19th life that Dumas embroiders through the novel. You get a real sense of time and place, skin, textures, sights and sounds.

By choosing this most French of novels as inspiration for a cologne de nuit, Anais Biguine has imbued the fragrance with a doomed eroticism and delicious floral tinted back-story. It is for me the best of the four fragrances, a rich blend of traditional soapy ablutions and the private traces of desires written across the skin in anticipation of love.

When you first spray it, the notes tumble out with heady intentions, orange blossom, clean and sparkling; verbena, fresh and verdantly energizing. The touch of cardamom is fun, dancing and a little cheeky, out of the norm. These notes unfold like the evening toilette; petal-infused water in a porcelain bowl, powders and creams arranged to hand. The delicately fragranced water splashed over tired skin to revive and sensualise. Almost immediately you can imagine the boudoir lipstick facets of rose and violet, smeared with the waxen chilled beauty of camellias. This is the preparation, the painting of the skin as canvas; these three notes are vividly realised, rounded, fleshy, cool and contained. As they drop into the skin they release the most gossamer light powder that you need to actually inhale directly off the skin to truly appreciate. I really like the underlying old-fashioned soapiness; proper floral creamy lather that has left traces in armpits and neck, along thighs and hipbones. The implied sense of preparing to rendezvous, barely removing the scent of something or someone who was there before. 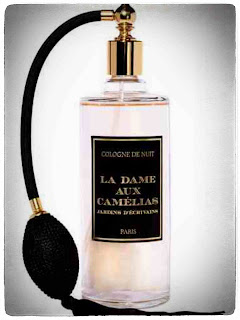 Anais Biguine has created a beautiful and affecting scent in La Dame aux Camélias. The 250ml bottle has a puffer lending it a vintage feel. Hours into the drydown, I love the delicacy, the hint of strawberry milkshake powder. A few reviews have criticised longevity. I find it lasts well enough, 6-7 hours on my skin; I kept catching zephyrs of it as I moved through my night. I wore it to bed and reveled in its ability to clothe the skin in a sense of anticipation. Yet it is also an intensely private scent, intimate and closely worn. As for wearing it nude, that is a secret for me and my bedroom walls.. 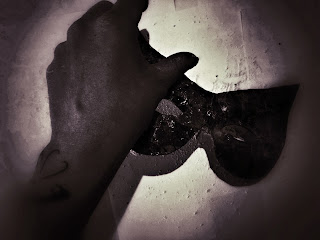 For more information on Jardins d'Ecrivains, please click below: