A Dram of Smoke & Fire: ‘Aqua Alba’ by Angela Flanders 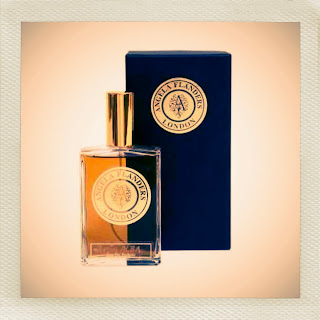 I recently visited Angela’s second shop in Spitalfields on a work visit to London. The original Columbia Road shop only opens its doors on Sundays for a handful of hours. But the new scented sanctuary operates more normal opening hours and closes on Sundays.

Angela Flanders Perfumer is tucked away down Artillery Passage next to Precious, the clothing boutique run by Angela’s daughter Kate. Precious One, Angela’s heady, luscious floral chypré was created for Kate’s boutique and went on to scoop a much lauded Best New Independent Perfume award at the 2012 FiFi awards, surprising many in the industry. It will have not been a surprise to Angela’s numerous fans, near and far who love her creative and unique fragrances, home scents and skincare. She is very much a name shared amongst friends, softly, secretly, perhaps a little reluctantly. Such is the desire to keep her scents secret.

Spitalfields is hipster central, awash with arty types and bearded men in rolled up trews, girls in vintage rags on basketted bikes and dogs in neckerchiefs. It’s a little too deliberate for my liking. In the evenings the trendier pubs overflow onto the pavements and everyone sits around discussing Guardian articles and the search for the perfect coffee. But the area is gathering some very interesting scented destinations. Oxana Polykova’s wonderful scented niche haven Bloom Perfumery is on Hanbury Street and French perfume provocateurs Etat Libre D’Orange recently opened their first British store a couple of streets away in Redchurch Street. Gorilla Perfume, the fascinating scented house of Lush until recently had the most wonderfully cute and involving pop-up shop in Rivington Street. So Angela’s boutique in Artillery Lane is in a great area for the niche scent lover. She may seem old fashioned and whimsical to some, but she is an instinctual parfumeuse of considerable skill and imagination. 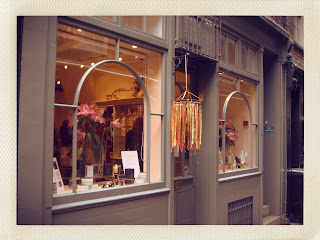 The boutique itself is padded and soft. The outside world stops as you step through the door. It does feel a little Parisian and archaic, which I have to say I liked a lot. Most of all I liked the sense of hush and gentility that emanated from the thoughtful and decorative space. The air was tinted just enough with an amber scent I think, and a hint of gilded rose. Gold and gilt are noticeable motifs. The bottles themselves are quite modest rectangular shapes with gold lettering. The shop’s elegant furnishings are elegant and ormolu is style, knocked back gold and wood. There is an air of gentility and calm that befits Angela’s distinctive brand image.

In this day and age of ever changing technology and shock value aesthetics, it is easy to forget that many people are searching for stability and reassurance in their lives. A sense of safety. But, you know what, however elegant and genteel Angela’s fragrances may seem on the surface, I discovered that for every shimmering classic floral, there was something a little different, a little darker. I realised, Angela Flanders is a little like the PD James of perfumery, creating masterly olfactive scene setting, skies, gardens, travel, weddings  - their safety disrupted by touches of darkness. Very British in fact; the body in the library, the shadow in the sun, the potential danger behind a lipsticked smile. Eccentricity and manners, situations solved with decorum and observation.