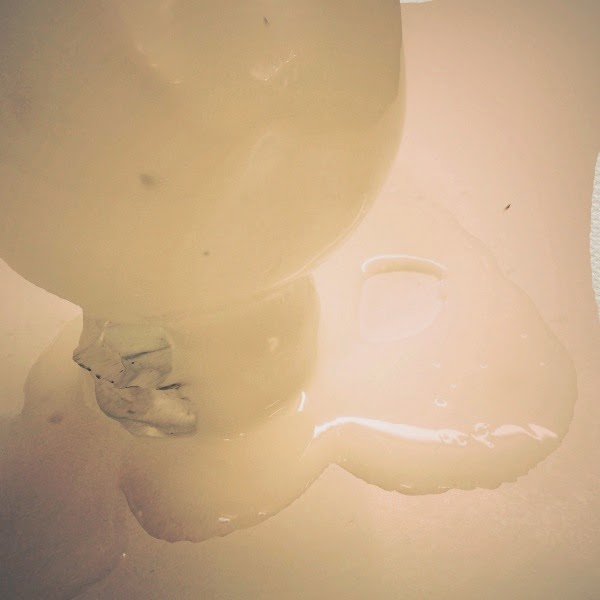 The definition of an agonist is a substance, especially a drug (……ahhh…sweet scented narcotic…) capable of inducing a physiological response in a receptor. So you spray, inhale and smile, blush and dream…..perfect.

Agonist is the second Scandinavian house after Andrea Maack I have really fallen for recently. I have admired their deeply covetable haute-couture sculptured Kosta Boda glass flacons for ages, but the prices while undoubtedly reflective of the hand-crafted processes involved are pretty steep, upwards of 880 euros. They recently introduced a kind of ready-to-wear Spray Line, the juices housed in smart 50ml bottles priced at a far more reasonable 125 euros making these singular fragrances much more accessible. 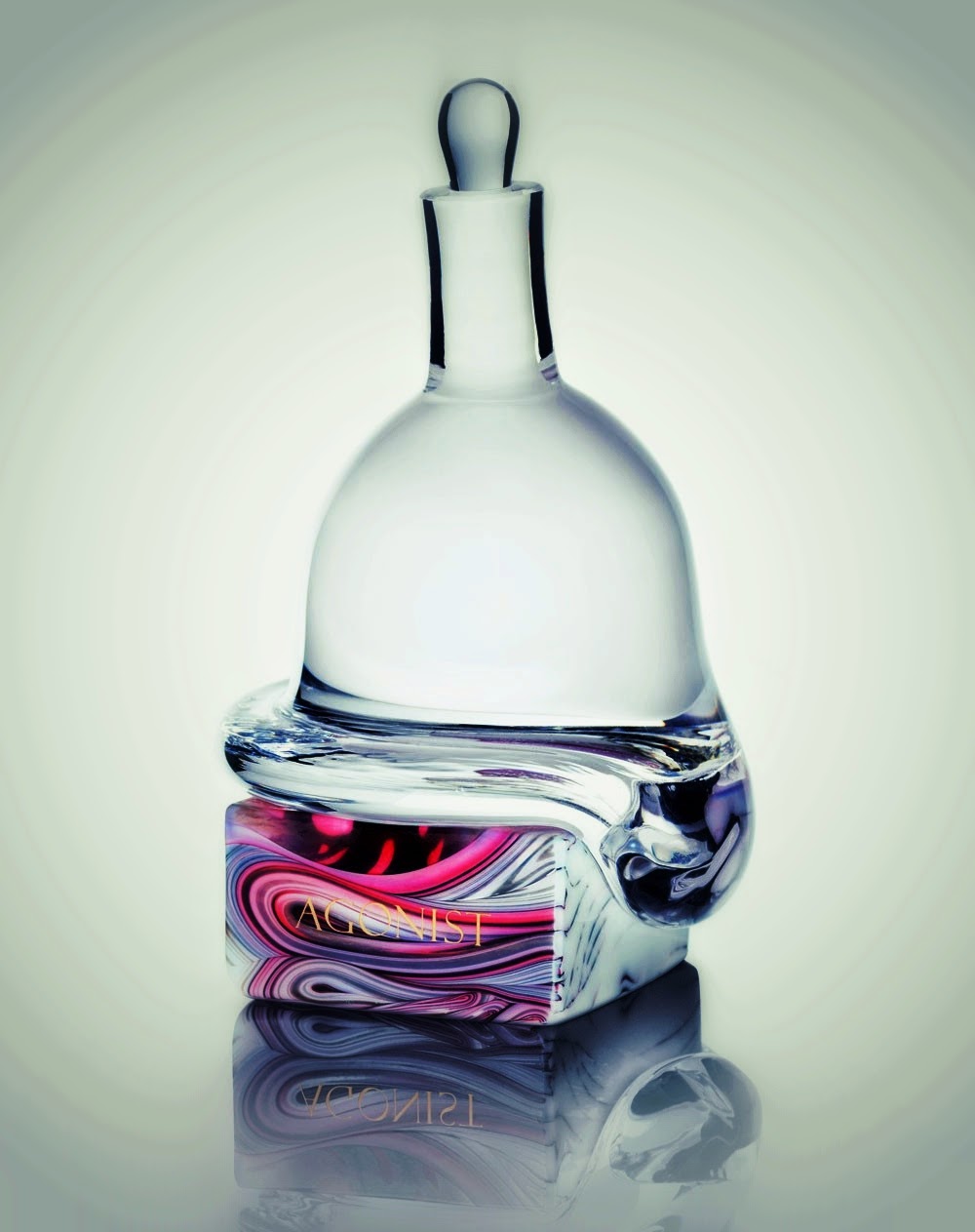 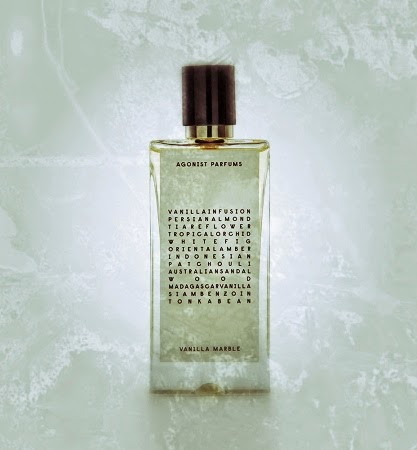 Like Andrea Maack, Agonist is a house very much immersed in art and visual aesthetics. Their blog page is a waterfall of striking and captivating images that nourish and reflect the Agonist state of decorative mind. And like Andrea Maack, the balance is just right, gentle provocation and Nordic aloofness on one side; reflective and gorgeous olfactive play on the other. Both sides are needed to cancel out pretention and accusations of esoteric self-indulgence. The use of glass reinforces the Nordic chill and reserve of the fragrances. Glass is both forged of fire and yet immensely fragile. Cold to touch initially but warming up under finger tips. Glass is an oddly urgent medium in that it always demands to be touched, traced and cherished. In the case of Kosta Boda glass artist Åsa Jungnelius, the Agonist fragrances have inspired her to create the beautiful organic, glittering forms in startling hues of white black, blue and yellow. They resemble alien blooms, holding their secret aromas inside concealed wells, spouts, coils and crevices. 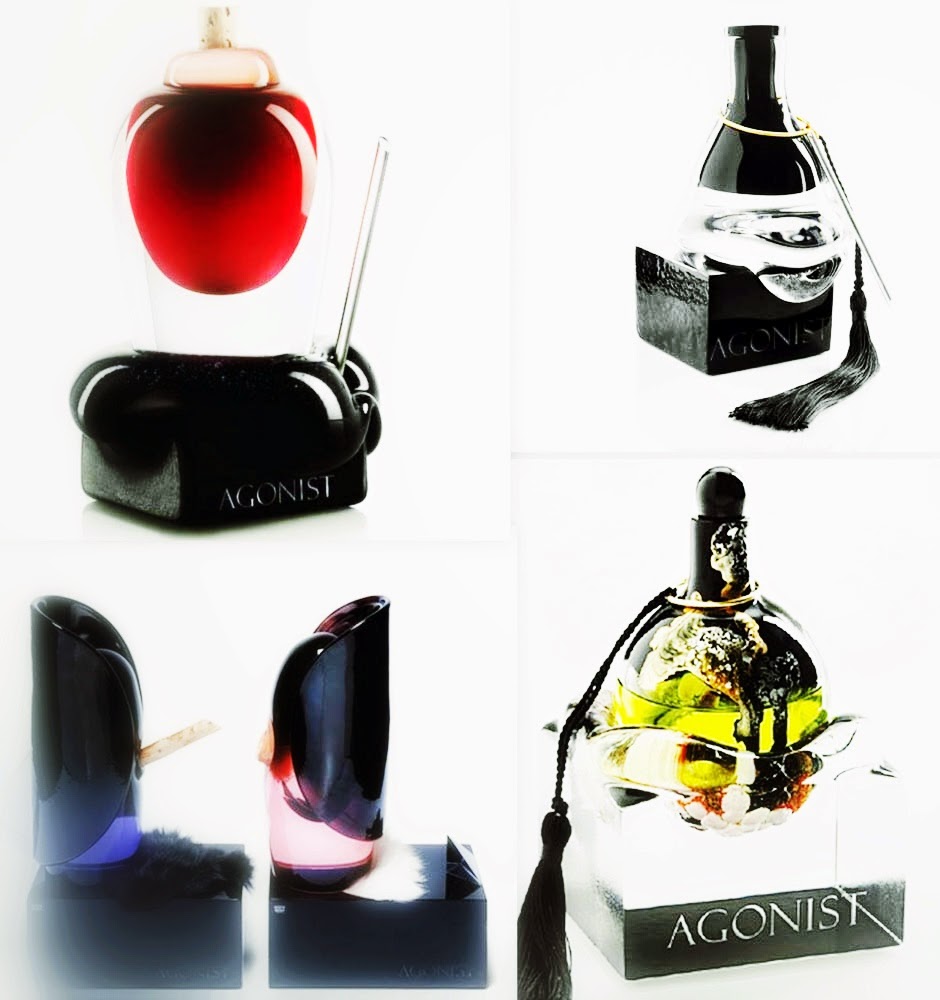 I first tried the Agonist line in Liberty on a woolly day when the skies hurled shuddering rain across London. I had gone into buy Mr E a gift from Cire Trudon and sample Francis Kurkdjian’s beatific Lumière Noire, a scent which had haunted me since a previous visit. As usual the aggressive, overbearing staff in the perfume department who seem incapable of leaving you alone in case they miss a sale made the visit well nigh on unbearable. The sales and service in Liberty is often shocking unless you can find someone who has been there a long time and even then the poor things feel compelled to obey a new high impact go-get-em approach which is a reflection of new management not necessarily the individuals. Such a pity..anyway… I digress…

I tried three of the Agonist line, Vanilla Marble, Isis and Black Amber. I was too overwhelmed at that stage and had the beginnings of full aura migraine which usually happens when I visit London sadly. I feel perhaps I am not robust enough for our capital. Vanilla Marble was perfume that stayed with me throughout my return journey to Edinburgh and the one I promised myself I would buy. A year later, I am sampling the full range and Vanilla Marble is still the scent with the most impact, arguably one of the least convoluted and experimental compositions in the collection but for me it has a sense of true smooth, enveloping beauty. I crave it, my skin smells like home-made crème anglaise, densely vanillic and lickable. Yes I admire the other scents, some of them are amazing, but it comes down to desire and fetish. Lilies, rose & vanilla – my triptych round which all else must coalesce. As soli-notes, they must be bloody electrifying to win my wintering heart. 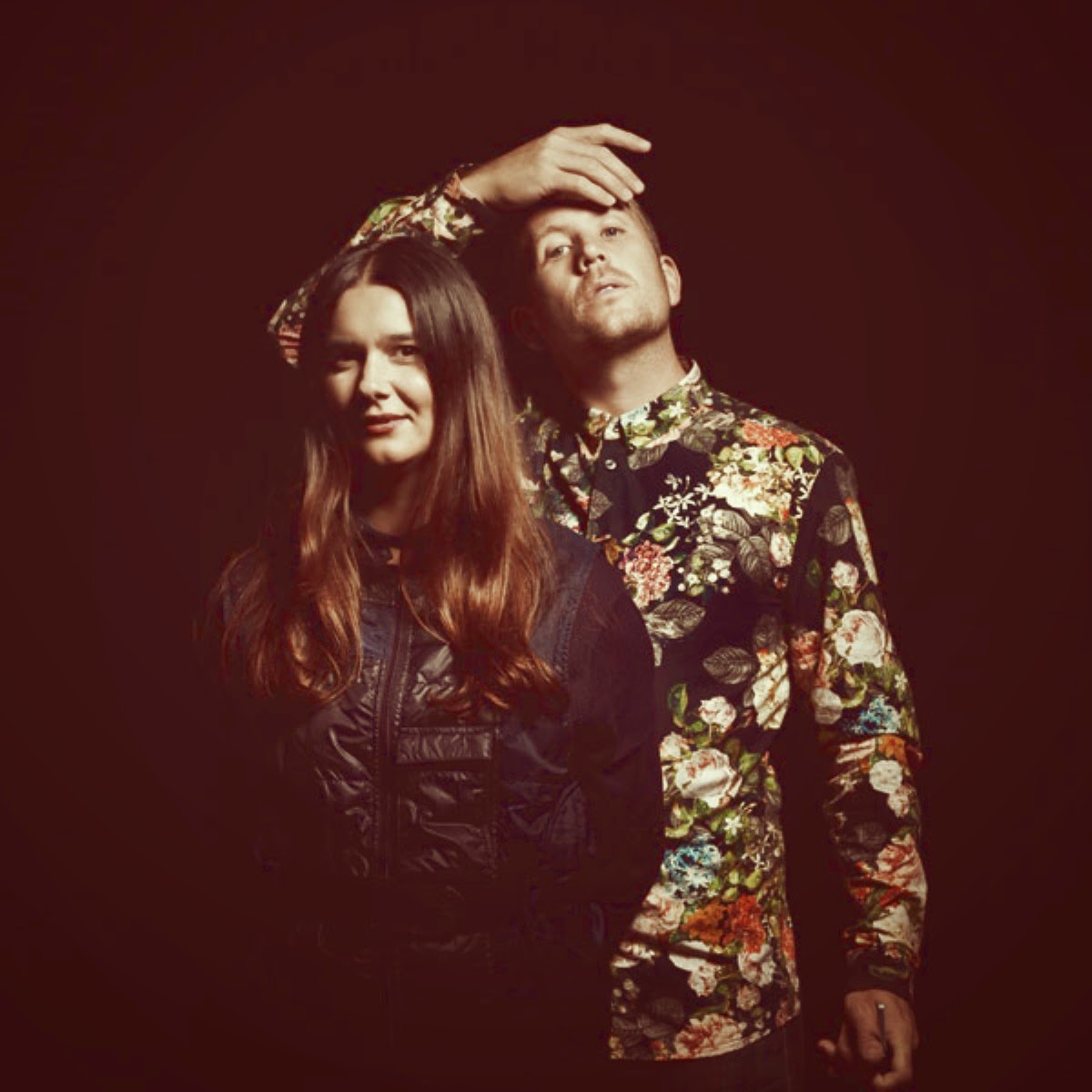 Let me give you a little more background into Agonist. The Swedish House was launched in 2008 by Christine Gustaffon and Niclas Lydeen. Christine is part French and studied at the Studio Bercot in Paris, considered by many to be one of the best fashion design schools in the world before returning to Sweden where she met Niclas, an art director and artist with a background in visual communication. Together they collaborated on a number of different projects, eventually settling on the ephemeral world of niche fragrance and all aspects of packaging and presentation. Their combined skills and artistic influences was always going to mean that Agonist would be different, the carefully wrought aromatics reflecting environment, identity, art, culture and memory. Strongly influenced by a clean, rigid Nordic design ethic Christine and Niclas have set out to create and curate a line of sensual, yet controlled perfumes with a variety of inspirations; the dense artic forests, the erotic glossy photography of Guy Bourdin, our preoccupation with beautiful gems and the psychology of love and desire.

There is a dusting of pretention across the PR and marketing narratives, but this is to be expected from any brand launching in today’s increasingly cut-throat niche market. The lines are blurring and the knives are out. It is impossible to know what really came first, the juice or the concept. But I feel if the perfume is amazing enough I can live with hyperbole and hipster aesthetics.

You all know by now how much the Fox loves vanilla, so my love for Vanilla Marble should really be no big surprise. But I am quite fussy about the style and interpretation of my vanillas. My signature scent Vanille Absoluement by L’Artisan Parfumeur is thick and piratey, reeking of smoke and rummy booze and I love Vanille Insensée by Atelier Cologne, a completely opposite take on the velvet sheath, smooth, powdered with a mojito hit of lime and addictive fizz. As soon as I inhaled Vanilla Marble, I smelled the strange plasticity of dolls’ heads and the pliable grittiness of Play-doh left behind on hot fingertips. There is a grubbiness and grime to the plastic, a pink faded rub that I find sexy and creepily compelling. Mr E told me that doll manufacturers sometimes add heliotropin and vanillin to dolls skin to build in a maternal compulsion to hold, touch and breathe. How fabulously eerie is that?

The marble aspect suggests the cold sculptured stone but also the glassy orbs of childhood. Both are intensely tactile, inviting caress and hold. As the scent unfolds luxuriantly on skin, a delicious milkiness drowns the senses and the structure of assembled white notes melt and coalesce into a slow swirl of gelato chic. Vanilla Marble has delicious notes, a top with vanilla infusion, Persian Almond and luscious Tiare flower. The heart turns on a white fig and orchid duet with some patchouli and amber. The base has more vanilla, benzoin, tonka bean Australian sandalwood.

The almond note is tremblingly beautiful with an alluring opacity that lies like a veil over the pearlescent marriage of tropical orchid and oozing fig. It’s an unusual effect, but serves to enhance and augment the overall comforting gauze of the formula. As Vanilla Marble settles, a very distinctive white chocolate character starts to appear, not too sickly sweet though, the kind of off-white artisan white chocolate bar flecked with vanilla seed. The benzoin in the base is exploited this time for its vanillic mimicry and the tonka bean radiates a mellow hypnotic sweet compulsion that complements the lacteous sandalwood notes. Everything is designed to flow, ooze and drip. Vanilla Marble is an essay in white control and texture. Agonist say childhood, hmm, I’m not so sure, the combination of notes is a little too cold for that I think, although I guess it depends on your childhood. I use vanilla as an anchor, to feel safe when I am threatened by stress and the general effluence of life, but I never forget that in the right olfactory hands vanilla’s comfort and safety can ooze into blatant eroticism. 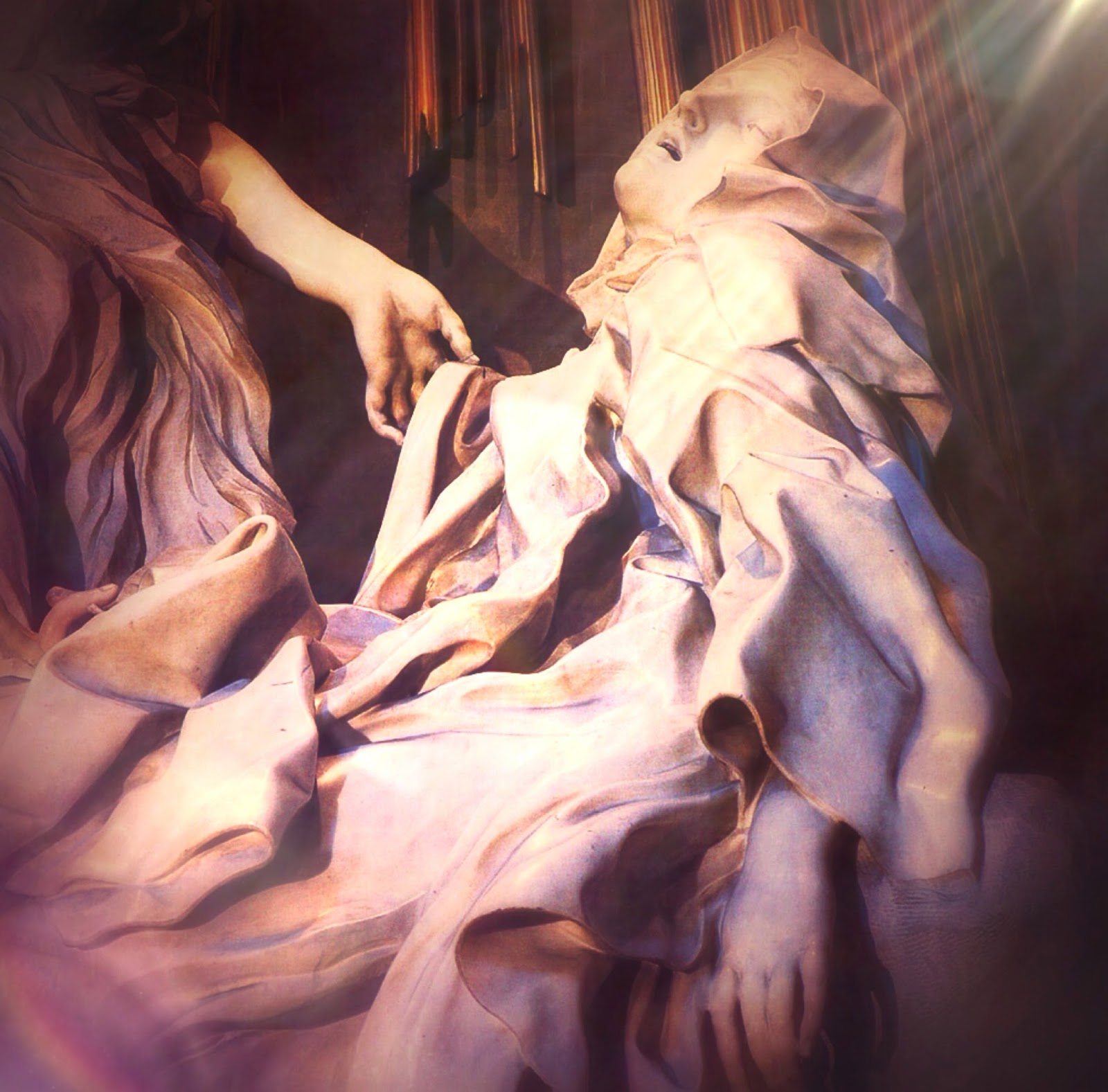 One of the key attributes to sculptural white marble lies in its structural composition; it has a relatively low index of calcite, which means the light penetrates the surface or skin of the stone more deeply before scattering out. This lends marble its much-valued waxen lifelike appearance and allows it to be carved so beautifully into works of art inviting our touch. I have spent hours in the galleries and museums obsessing over scattered collections of marble fragments. Some of the pieces are so lifelike, the stone seems to rise and fall with subtle, secret breaths. Breasts and thighs, cheeks and eyelids have veining and plumpness. Yet stealing a touch, the objects are smooth, distant and cold. This tension makes marble an immensely attractive and compulsive material, the essence of frozen, suspended flesh. 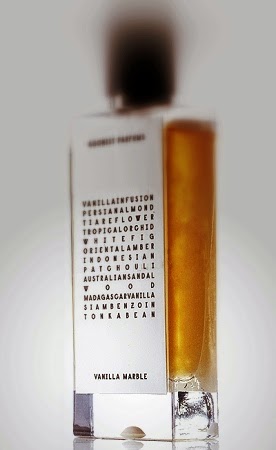 Vanilla Marble echoes this dichotomy; it is tactile, desirable and a little aloof. One can almost imagine striations of tone and texture veining the scent, subtle fluctuations in surface shade and shadow. My senses react with calm familiarity to this most fluid and lustrous of snowy gourmands. And yet part of me is perturbed by the oddity of phantom doll limb, dislocated arm and razed head underpinning the sweet white fun. I know I possess a macabre twist of mind when the olfactory mood takes me, I find it hard to just appreciate the sense of pretty. I wore a lot of this creamy scent as I walked home on a still and ponderous polluted eve, sky leaden with car-blare and scowling clouds. I realised I smelled alive, vibrant, like a fairy-tale penned in looped and curling script on dazzling ivory parchment.

Agonist have created some remarkable and poetic aromas since their inception, haughty abstractions, photo-realist portraits and witty retro homages; everything completed with cool gloss and cultural nous. But Vanilla Marble is the stand-out scent, despite its seemingly pallid and nonchalant appearance. In fact it is a gentle narcotic, one you barely notice taking over your senses until it is too late and you smell of dolls and patisserie, almond dust and plastic. How magical. How exalted. 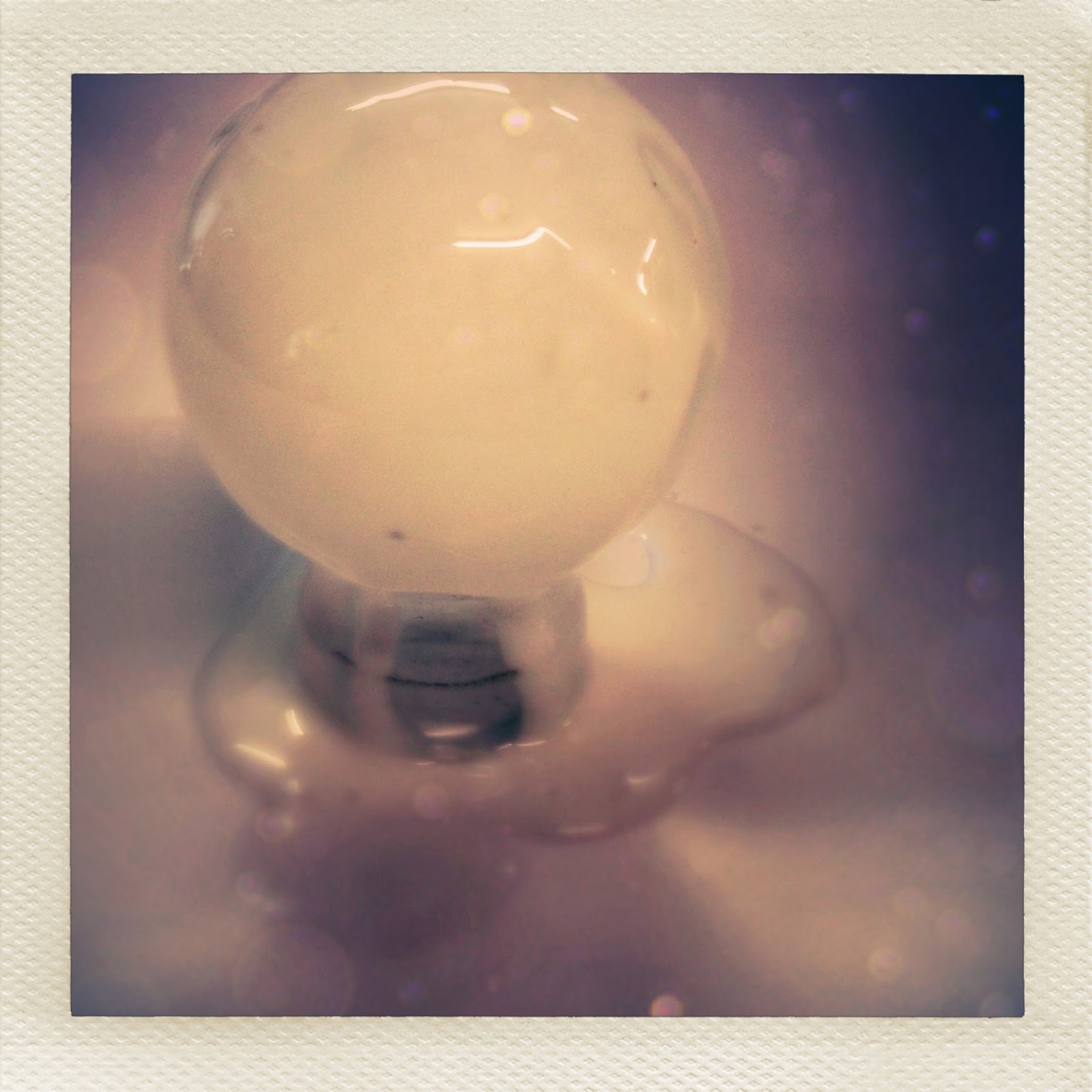 For more information on Agonist, please follow the link below: