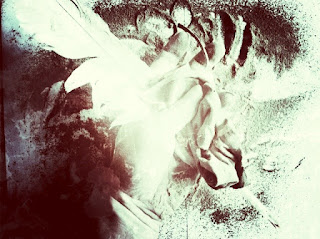 The original Dior Homme by Olivier Polge released in 2005 was strikingly beautiful, combining a stunning particularity of Tuscan iris with cocoa, leather, sage and amber. There is a traditional lavender note rubbed through the composition too, adding to the haunting bruised quality the fragrance has as it settles onto the skin. Dior Homme really shook up the world of men’s fragrance, being both ethereal and sensual, with a strange ambiguous edge that caught the mood of the time. Yohji Homme and Hanae Mori Men had been sweet and strange too but Dior Homme drifted on a razor’s edge. It has always reminded me of a particular Charles of the Ritz powder my mother used, a peachy, caramel scented dust that was quite particular to the brand. It is this troubling androgyny that has unsettled so many since the launch. The rich Tuscan iris gave the fragrance a bloom and silvered texture that was extremely rare in men’s perfumery. It seemed almost feminine, soft and floating in a sea of its own musky subtleties.

I think it is probably one of the finest men’s fragrance launches of the last 25 years and altered the way many men wanted their skin to smell. It also proved that a non-niche scent could fundamentally shift men’s scent on its axis. In many ways, the launch of Dior Homme was as important as the seismic shift in women’s fragrance after the appearance of Mugler’s magnificently divisive Angel.

The ambiguity and quietly pared down style of Dior Homme was welcome relief from the raft of sweaty, pheromone saturated releases flooding the market and dull sports replications of the great granddaddy of them all: Pierre Bourdan’s calone drenched Cool Water. Everything really started to smell very similar, clone upon scented clone. Bottles mimicked bottles, packaging looked uniform and deliberately generic, campaigns used music stars and sports stars in an attempt to appeal to a more bankable and trend driven customer base. The speed of new releases seemed extraordinary. Flankers were stretched to breaking point with colour (Red, Noire etc.), sport, metallic and Night etc variations. Some brands toyed with stronger concentrations like eau de parfum for men such as Terre D’Hermès.

The test of a true classic is longevity. Along with Jean-Claude Ellena’s original Terre D’Hermès, another modern marker in recent men’s fragrance development, Dior Homme sells in huge quantities and still smells very unusual considering how many fragrances have tried to copy it’s formula: Van Cleef & Arpels’ Midnight in Paris, the rather predictable Avant Garde from Lanvin, Victor & Rolf’s shuddering Antidote and a whole raft of high street horrors from clothing brands such as G-Star. One of their recent releases is so similar as to be shockingly plagiaristic, albeit a badly done photocopy where the toner is running low…...

Even Polge’s own Power for Kenzo channeled the same powdered weirdness and androgyny, not quite achieving the same level of beauty however, something always twisted the formula the wrong way on my skin and I was left with a whiff of burnt metal that made me feel unwell and dizzy.

It was the rendition of the iris accord in Dior Homme that was so very unexpected. There had always been iris in men’s fragrances before, especially orientals. Guerlain’s Mouchoir de Monsieur has lilting iris touches in the base offset by vaguely Parisian pissoir notes. Creed’s Green Irish Tweed flatters the Florentine Iris with violet and verbena and the Different Company’s Bois D’Iris by Jean Claude Ellena sets the iris amid a backdrop of narcissus absolutes, geranium, vetiver and cedar. But Dior Homme was the first mainstream male scent to rally ramp up the powdered more feminine aspects of this most luxurious and strange of flowers.

Extracted from the root of the iris, (the best comes from iris pallida or iris florentina), orris butter: the result of hanging, aging and maceration of the best roots, is one of the perfume world’s most exceptional and beautiful ingredients. It has an incomparable quality and texture in fine fragrances, a silken shimmering sensation that lies across the skin like glittering grey spider webs. I love the ghostly effects of iris and when it is given full rein in fragrance the effects can be utterly sublime. The recent Mon Numéro 8 by Betrand Duchaufour for L’Artisan Parfumeuer was an ice-cold sheath of iris and musks, chilled like death, but incredibly moving. Jo Malone’s limited edition Iris & Lady Moore blended the green fragrant leaf of an English garden with the silvered powder of iris to great effect. And Prada have ben tweaking and amplifying their obsession with iris for years. I do have a nostalgic love of Hermès’ Hiris by Olivia Giacobetti. Dusty and dazzling in equal measure, it fills the senses and plays out a complex portrait of iris over notes of honey, carrot, hay, rose, vanilla, woods and Ambrette seed.

I admit to phases with iris. It needs a time and a place. I often need to be cold, or feel chilled, the onset of frost, snow, and dampness. These are more than abundant in Scotland, so I do wear a lot of iris as I criss-cross this majestic city. Sometimes it can feel like you are wearing a veil of metallic threads. I crave a tempering, a whoosh, a melting. So when I first smelt Dior Homme, I knew it was right. The subtle interaction of iris and musks almost floating on a sea of dark chocolate whipped up by leather tinted zephyrs. The construction was perfection. Odd, sweet and highly addictive, (you were always tempted to drown in the musky sea) just so right. 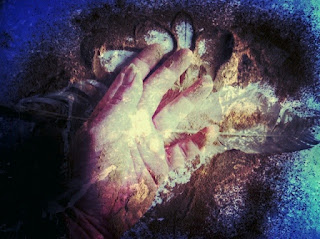 Then Dior Homme Intense came along and a whole new world opened up. A world of disconnections, cocoa dust, obsessions, sensuality and deep deep skin cravings. Authored by Patrick Demachy, it was a brilliant and darker twist on Polge's original formulation. It had a really magnetic pull on the senses, the cocoa note throttled up, darker and richer, all ganache and dusted patisserie. A touch of animalic Ambrette seed (musk mallow), pear, cedar and a deeply sexy injection of earthy lavender. I could happily keep on spraying until the bottle is empty. It has been re-formulated already since its release which is a little disappointing. The pre-reformulation recipe had a more rounded Guerlinade-style smoky base to it. This resinous bass vocality has been lost a little, replaced by a thinness than becomes more apparent as the fragrance stretches itself out over the drydown. The cocoa note has become a little cheapened too, as if a bar of 85% cocoa solids has been replaced with 50%. There is a more of a lactic, creamy quality now and a turned edge to the scent, which was not there before.

But you know what, even reformulated, Dior Homme Intense is a extraordinary experience, wrapping you in layers of olfactory sweetness and powder, woods and subtle yet persuasive masculinity. Like a trust exercise where you fold your arms and allow yourself to fall backwards and be caught. There is a reassurance in falling. You can topple into this strange and mesmerising fragrance. It has an otherworldly quality I just adore. A kind of replicant charm and sniffability other fragrances can only dream of. In another world I am plastic and walk flickering cocoa dusted streets. I leave faint traces as I walk trailing silvered powder in the air like fire. A car shimmers to a stop and someone says my name. The sky flares with light, a sudden burning setting of moons. I get in and smile, the engine roaring into life as I slide into seats of the softest leather I have ever felt. All around cocoa dust swirls and obliterates the view. A hand presses mine. My skin takes time to reform. I smell iris everywhere like frozen air. The man in the car is blurred and strange, radiating power. I am giddy on The Man Who Fell To Earth eeriness of my own skin. The cocoa and iris glow like a halo in the dim mist of the car interior. I am kissed and smile. I love this fragrance, the intensity and depth, the smudged ambiguity. Engines purr. I sleep and dream.

I have a friend whose signature scent is Dior Homme Intense. He wears swimming pools of it. When he moved into the city last year, he smashed three bottles of precious pre-reformulation Intense. His descriptions of scented grief and anger, of time slowing, of iris and leather leaking like blood were dramatic and fuelled by frustration and rage. He said he was overcome by a sudden desire to roll in the shattered glass and evaporating scent just to relive the dying moments of his favourite fragrance. Ah. Such is the power of Dior Homme very very Intense. Fellow replicant dreamers and lovers, wear it and it will love you forever. 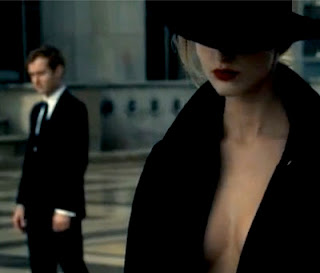