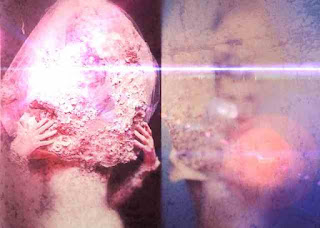 I have always had a bottle of the original Lolita Lempicka Le Premier Parfum in my collection. It is one of my touchstone fragrances. As well as being sublimely strange and trangressive on my skin, it was authored by one of my favourite perfumers, the elusive and unpredictable Annick Ménardo.  The licquorice, violet and musk blend is one of my favourite sniffs in fragrance, blended so addictively with notes of ivy, snappy anise, tonka bean and amarena.

Ménardo can conjure beautiful waveform scentscapes from her notes. The symphonic movement in Le Premier Parfum from sweet and green to spiced and just downright unsettling is a joy to wear. I find it joyous, it holds to the skin and dries down to a lingering aniseed and lilac-tinted muskiness that floats over the body like the softest voile. It was launched in 1997 in the wake of the all-conquering Angel and is the only pretender to the sugared throne with any real originality. The sensual bottle by Alan de Morgues resembled a twisted fairytale apple and really stood out in the boring and generic world of late 90s bottle design.

The Lolita Lempicka Au Masculin was fabulous too, flaunting a ramped up riff on the anise and ivy accord for a herbalicous and sweetly forested feel. To me is smelt like the taste of Black Jacks, addictive gooey aniseed chews I gulped down in my childhood. But Le Premier Parfum always had the edge for me, more sexual and shocking on the skin. It always smelt so fresh and vibrant; so unexpected on boys, more descriptive and ambiguous. And as much as I liked the Masculin, it did feel like a revisiting of themes Ménardo had done better and more gracefully in the criminally underrated Kouros Body, a suave and elegant take on aniseed, a million miles away from the feral bathhouse sweat and violence of the original Kouros.

Since the 1997 release there have been a number of limited edition flankers and some less successful attempts to move in different directions. But the constant returning to the motherlode, the central motif of violet and vanilla and the gauzy romance that captured hearts and emotions is a powerful force. There was a unique exception in Maurice Roucel’s L in the kitchy blue heart-shaped treasure bottle. An imagining of private treasure found on the ocean floor, this bizarre blend of salt and sweet was dazzling and lickably sexy on the skin. A heady cocktail of solar notes, floral tones and a weird marine/saltiness that reminded you of skin emerging from the sea mingling with traces of Ambre Solaire. Very clever and oddly quite perturbing. I never found it a happy scent, it always made me feel rather melancholy. I saw the sun setting over the sea, shipwrecks and objects glittering down into the depths. I loved it madly for a while and now if I smell it, it just overwhelms me with its scent of sunsets and dying beach fires.

Now we have L’Eau en Blanc, another flanker, in a white lace variation on the original De Morgues bottle.  It has a strangely narrow remit, being pitched at brides and young women dreaming of that special day. The scent was sprayed on lace strips for me and the saleswoman mentioned the wedding link and the colour inspiration. The whole launch, bottle, packaging etc are suffused in soft pink and whites with metallic touches and hints of golden embroidery echoing the ivy motif of the original fragrance. All of this decoration references the veils and lacework of bridalwear and the kind of delicacy and transparency we associate with the fragility and frou frou of weddings.

The fragrance is once again authored by Annick Ménardo, the nose behind the original Lolita Lempicka. The main inspiration for L’Eau en Blanc is sugared or Jordan almonds, the popular pastel coloured bonbons used across the world at weddings, christenings and other important social ceremonies. We have all been to weddings and taken bags of these almonds home with us. The tradition goes back to Roman times originating in the preparation of honey-coated nuts and seeds, often as an integral part of ceremonial banquets and foods marking important moments in personal lives. It is a simple concept, the combination of the bitter almond and its sugary shell symbolising the bittersweet nature of love and life to come. 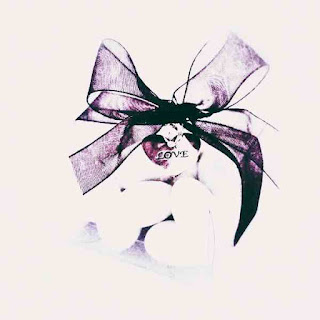 These bonboniera as they are sometimes known are usually white or ivory for weddings, representing purity and innocence.  Blue and pink are common for christenings.  In my house when I was a child we used to hang little embroidered camels on the Christmas tree and I used to wonder where they came from and just assumed they something we had picked up on our travels through the Middle East. Then my mother told me the camels had been presented to me when I was born in Bahrain. The camels had saddle-bags of blue sugared almonds attached to them. Blue for boys.  So I treasure these oddly stitched little toys, knowing they welcomed me into the world.

Jordan almonds are usually found in groups of five, representing Health, Wealth, Longevity, Fertility and Happiness. Always an odd number, as this is indivisible even by two, symbolising the unbreakable bond between bride and groom as they start out in life.  After the wedding festivities, any unmarried women and girls taking the almonds home are meant to place them under their pillows and they will dream of their future love.

I was very taken by this fragrance the moment it laid itself down on my skin. It has what I might describe as a craquant quality to it, the scent of a texture, the biting down on sugar and shell, followed by a melting in the mouth. The more I wear it, the more I fall in love with its strangeness. It is veiled. Neither heavy nor light, but a balance of the two. Increasingly a number of perfumes have adopted this parfum voilé approach to scenting the skin. It intrigues me. They demonstrate a stylish tendency to drape or lay over the body like a veil, blending with the skin, lending different aspects to the surface; light, shadow and scented texture.  Penhaligon’s Juniper Sling, L’Eau de Chloé and the new Guerlain Aqua Allegoria Lys Soleia work a similar vibe on the skin, rising and falling throughout the drydown, intriguing the senses rather than just a normal top to toe drydown or something more linear.

It is fitting that lace is elemental in the decorative design of the bottle and packaging. The fragility of lace is appropriate to L’Eau en Blanc. Lace casts a web of intricate shadows, lines and shape across the skin, allowing flesh to be merely glimpsed. In many ways Ménardo’s powdery sugared eau de parfum does the same thing, laying itself sweetly and delicately down over the skin. As it breathes down, the interplay of light, heat and Ménardo’s mastery of notes plays up the elegance and drama of the trademark anisic/heliotrope accords and the new almond and raspberry touches. The slivers of iris, sap and vetiver heighten the leafy aspect, like the foliage of the bridal bouquet or the scent of floral arrangements on crisp white table settings. Musks round off the composition, softening the edges and hinting at the desire to come and echo through the night.

The popularity of the Lolita Lempicka fragrances often obfuscates their strangeness, the flickers of oddness, the dusting of shade. The violet nestling in the dark of the woods just out of the reach of the warm tendrils of the sun.  The ivy slowly choking walls and drowning trees. The bitter, almost poisonous bite of aniseed undercutting the glitter of sugars and vanilla.  Then there are the bejewelled apples begging to be collected and cherished,  like symbols of fairytale beauty killed by jealousy. Mixing this potent theme up with virgin white and the dreams of bridal longing presents L’Eau en Blanc as a fragrance with a strange and complex set of signals. The juice itself is dreamlike in its intensity, capturing for me a sense of suffused breathlessness, of almost swooning anticipation, that last poignant glance in the mirror, before the veil is lowered and you walk down the aisle.

The heliotrope emphasises the almond accent of the scent and this is further enhanced by the subtle brushstrokes of orris. You can almost imagine this accord as the crumbling icing of the wedding cake itself. A raspberry and carrot seed accord adds a jaminess, like licked-off party fingers. A vetiver note is velvet soft too, grounding the bonbon giddiness in a warm leafy drydown.

A lot of people have pointed out the repetitive nature of the Lolita Lempicka flankers. But you know, sometimes as with the Mugler Taste of Fragrance releases, revisiting original formulations can produce surprising and rewarding results. L’Eau en Blanc is a welcome addition to the Lolita Lempicka portfolio. I love the almond note, it is arrestingly executed and elegantly drawn out through the whole life of the scent on the skin.  It feels and smells like a genuinely romantic fragrance, played out in tones of silver softness and powdered dreams. So for now I am in love. 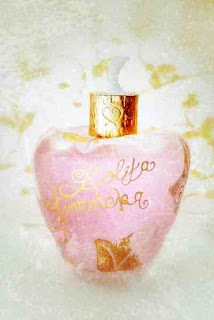 Please follow the link below for more information on Lolita Lempicka perfumes.

http://www.parfumslolitalempicka.com/en-EN
Posted by The Silver Fox at 16:39:00