Nordic Fatale: The Art of Malbrum 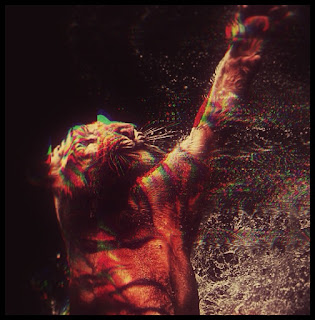 Tyger Tyger, burning bright,
In the forests of the night;
What immortal hand or eye,
Could frame thy fearful symmetry?

In what distant deeps or skies.
Burnt the fire of thine eyes?
On what wings dare he aspire?
What the hand, dare seize the fire?

From The Tyger by William Blake

Malbrum Parfum’s debut collection of peculiarly frayed and sensual scents has urgency and mischief in its juices. They proved popular at Esxence in March this year as did Creative Director Kristian Hilberg himself with his striking Nordic good looks and intricate knowledge of both the natural and synthetic components of his chic new house. 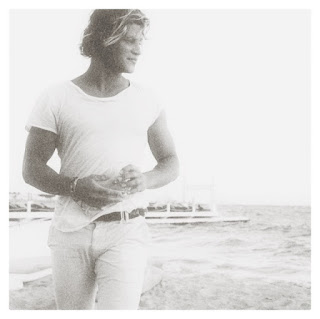 Reading the notes for the extrait strength parfums on the website Kristian has chosen interestingly to list the traditional head, heart and base notes separately from the synthetics such as Exaltolide, Toscanol and Ambrofix.
It is an intriguing and seemingly unnecessary separation until you start to sample the fragrances more intently, then the naturals/synthetics divide becomes vital and fascinating. 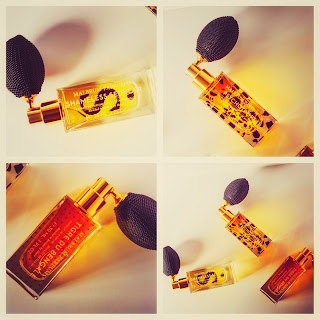 Vol.I of Malbrum consists of three deftly constructed formulae each one housed in robust rectangular 30ml bottles affixed with short retro-style bulb atomisers. These have an elegantly manufactured 90º turn & lock system for spraying, ensuring safe travel with no spillage. (Kristian suggests you travel with book-box and scent together… just in case). The three are Tigre du Bengale, Psychotrope and Shameless Seducer. Volume II is already under way apparently and will (fingers crossed..) appear later this year. 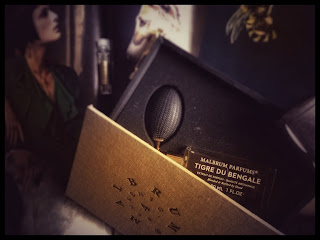 Each of the three bottles has a patterned backdrop down one side; a grid of black dots like stylised spots for Tigre du Bengale, ragged animal print or Rorschach blots for Psychotrope, and for Shameless Seducer a large sensual ‘S’, emphasised with a heavy dot beneath it. I love the overall packaging and design identity; it was conceived by multi-disciplinary design agency Olssøn Barbieri based in Oslo, Norway. The flacons are presented in muted vintage inspired cloth bound boxes. Placed on shelves, they look like old novels or textbooks. 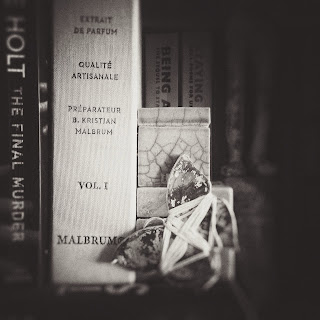 In fact the perfumes are located in two very different worlds, the high cold places of Northern Europe, Norway to be precise, homeland of Kristian and the iconic perfumed microclimate of Grasse in Provence. For this is where Kristian’s nose and collaborator, French parfumeuse Delphine Thierry has chosen to anchor herself after stints in Paris, New York and Mexico. 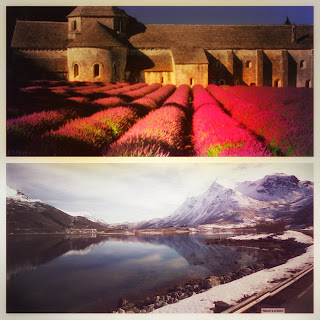 Along with perfumers like Cécile Zarokian, Luca Maffei, Amélie Bourgeois, Ann-Sophie Behaghel, Dora Baghdriche-Arnaud, Emilie Coppermann, Ralf Schwieger, Quentin Bisch and Julien Rasquinet, Delphine Thierry is of a generation of vibrant young noses, knowingly composing within the shifting restrictions of IFRA and choosing to view this as challenge and normality rather than the seemingly futile harking back to vintage and obsession with he death of materials. Delphine is independent, set up as Inspiration Libre, working mainly with niche houses but also offering a bespoke creation service for these looking for something personal and unique. 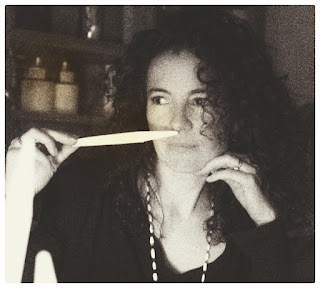 You can smell woody, sweet threads throughout her work. There is a signature of beautifully played natural and fantasy woods, wreathed in gauzy smoke, reaching upward off skin like ghost trees. Her best work to date for me include Castaña, a smeared, nutty iris and chestnut wonder for Maggie Magnan’s Galway-based Cloon Keen Atelier and Akaad and Galaad for Lubin, a pair of smooth and resinous undertakings with immense biblical beauty in the choice of woods, spices, balms and unguents. But it is probably her powerful, cinema-verité Montecristo for Masque Milano that really proved how immensely talented Delphine Thierry is. In a previous blog piece on Masque Milano’s magical Russian Tea this is how I described Montecristo:

’The beautiful turbulence of Montecristo is its ferocious animalism as it explodes out of the bottle. Yes, it’s a little faecal and dirtysexy but jeez so much fragrance these days is dull and sanitised to the point of tepid transparency. The sheer FUCK YOU of this is fantastic.’

A lot of perfumers are genuinely afraid of sexy, really good, dirty close up sexy. The kind of fragrances you smell on people and think..I wanna fuck you.. what happened to that and why are we so timid about scent that might suggest any asking, any flirtation or signaling for bed, skin and abandonment? I have always had fragrances in my collection that act like honeytraps, formulae that transform the skin into canvases of shifting, shimmering desire. 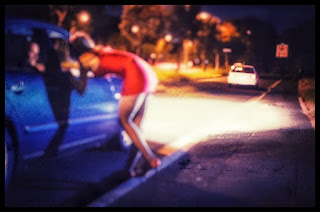 Shameless Seducer has the oddest ‘lime-fraiche’ accord smack bang out of the formula. It smells fatty and enticing like fresh key lime pie studded with unrepentant clove and cocky ambrette. There is a streetwalker swagger to this motherfucker scent, a fag butt crushed under a patent pointed heel, the scent of fantasy boywhores and weary night ladies exiting pungent cars, leaving trembling johns. Still dangerous, still relevant, still going on.

The mimosa smells bruised, damaged, wrecked by the filthy blare of civet in the base and the beautiful synergy of materials provided by a dose of Exaltoide. A combination of synthetic Ambrettolide and ambrette seed really ramps up the sensation of dirty, smeared powder as Shameless Seducer settles into the skin in the later stages. But the piquancy of the original lime-fraiche accord holds steadfast throughout the evolution of this morally dubious aroma. My skin loved the ambrette theatrics and truffly, civetty base; everything fell beautifully into place. Delphine’s lime-fraiche top is innovative and necessary to counteract the impending red-light quirkiness of the scent’s seductive body. Fascinating. 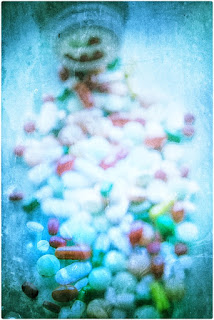 Psychotrope is intended to suggest in olfactory form the hallucinogenic effects that psychotropic, or mind-altering drugs have on the human body. An intriguing intent for such an elegant and smoky perfume. My first impression was of luxurious folded cashmere, with that just out of wooden storage scent, perhaps some of last winter’s perfumes tucked away in the fibres. I was quite taken aback at how serene this perfume was; the opening spike of pungent cypress is contrasted nicely against pimento and elemi resin, creating a resinous sheen for the soft fumes of saffron-infused incense and woods to wander over like weary migrant birds. There is a sudden throw of amber in the base, a little bitter, a little vegetal and salty that fades into languid greyness under the glowing woods. These are hugely amplified by very adult doses of Timbersilk and Ambrinol, which while hardly subtle, still manage to lend Psychotrope a compelling vastness. It has the visual odour of smoke behind glass, clean, rolling in elastic petal-form. But much as I admired parts of the construct and hypnotic incense tendrils it was perhaps my least favourite of the three, but I was feeling very fickle when I sampled it, so my opinion may shift.

I smelled bits and pieces of Comme des Garçon’s synth-oozing Wonderwood, Spicebomb by Viktor and Rolf and the delightfully smooth Bottega Veneta for Men that has a similar closed down elegance at the heart of it. It is much more refined than these of course and does throw touches of Delphine’s Galaad into the mix; I can smell traces of her signature in the woods and smeared resinous sillage. She has used the Cashmeran rather beautifully, poured like dry ice over the rough and tumble of woods and aggressive styrax, soothing edges and relaxing the smoke into a layer of languid haze. Psychotrope is hardly hallucinogenic, more contemplative and provoking. For now, I’ll reserve a little judgment and revisit it in a month or so.

(So yes, I revisited Psychotrope, wearing it over two days and yes of course I loved the damn thing, I was overtly fickle when I first sampled it. To be fair, my hay fever this year is heinous and I’m getting nosebleeds; these things are really damaging my sense of smell. But the hazy languid woodiness had me wondering who smelled so good. It was me.) 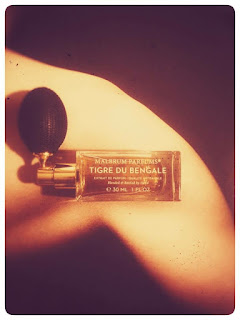 Tigre du Bengale is a quietly complex scent, a formula of study and intent. It stalks the air like its brooding killer namesake. The website mentions a ‘dry aromatic coke accord’ in the top and it’s quite true, it smells like classic coca cola poured over hot dry pavement; a little bubbled and dusty, a touch tarmmaccy. This lovely and unexpected opening segues into a warm mix of soft chewy licquorice and animalic burnished myrrh. 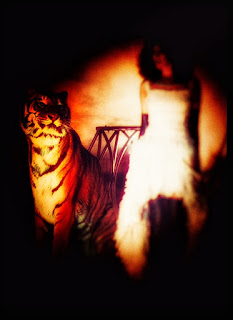 This strange canvas of effects is blindsided by the echoing expanses of icy Nimberol flooding the skin for a moment, obliterating any real nuances of effect. It takes a moment for anything to surface. I really like the slow tendril of tobacco, Burley tobacco according to the Malbrum notes. I did a bit of quick research on Burley tobacco; it’s more traditionally air-dried, rather than cured, barn air flowing over the drying leaves imparting a nutty, cocoa facet. This choice and attention to detail emerges in the languorous kindled drydown as the skin turns to amber and the tiger’s roar mutes to a guttural rumble amid the darkening night trees. 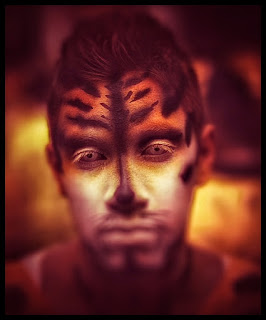 I love the mix of sweet shadow and spicy wander, the smoke and woody bite. Tigre du Bengale has beautiful resonance, it lies down on skin with belligerent grace, snarling a little, but ultimately allowing a sense of great beauty and sexuality to glow and fascinate.

Delphine Thierry’s work on all three of these fragrances is exemplary; there is delicacy, finesse and just enough brutality and sex to catch a jaded mind. A truly selvedge Nordic texture has been woven beautifully with classical French aromatic sophistication and knowability. It must have been very tempting for Thierry in particular to resist honing and smoothing the compositions, but they ideally represent a near perfect correlation of olfactory yearning and specifics between two distinctly different artistic individuals who desire only that skin smells magical, luminous, feral and carefully shadowed.

For more information on Malbrum please click on the link below:

Disclosure – From my own collection