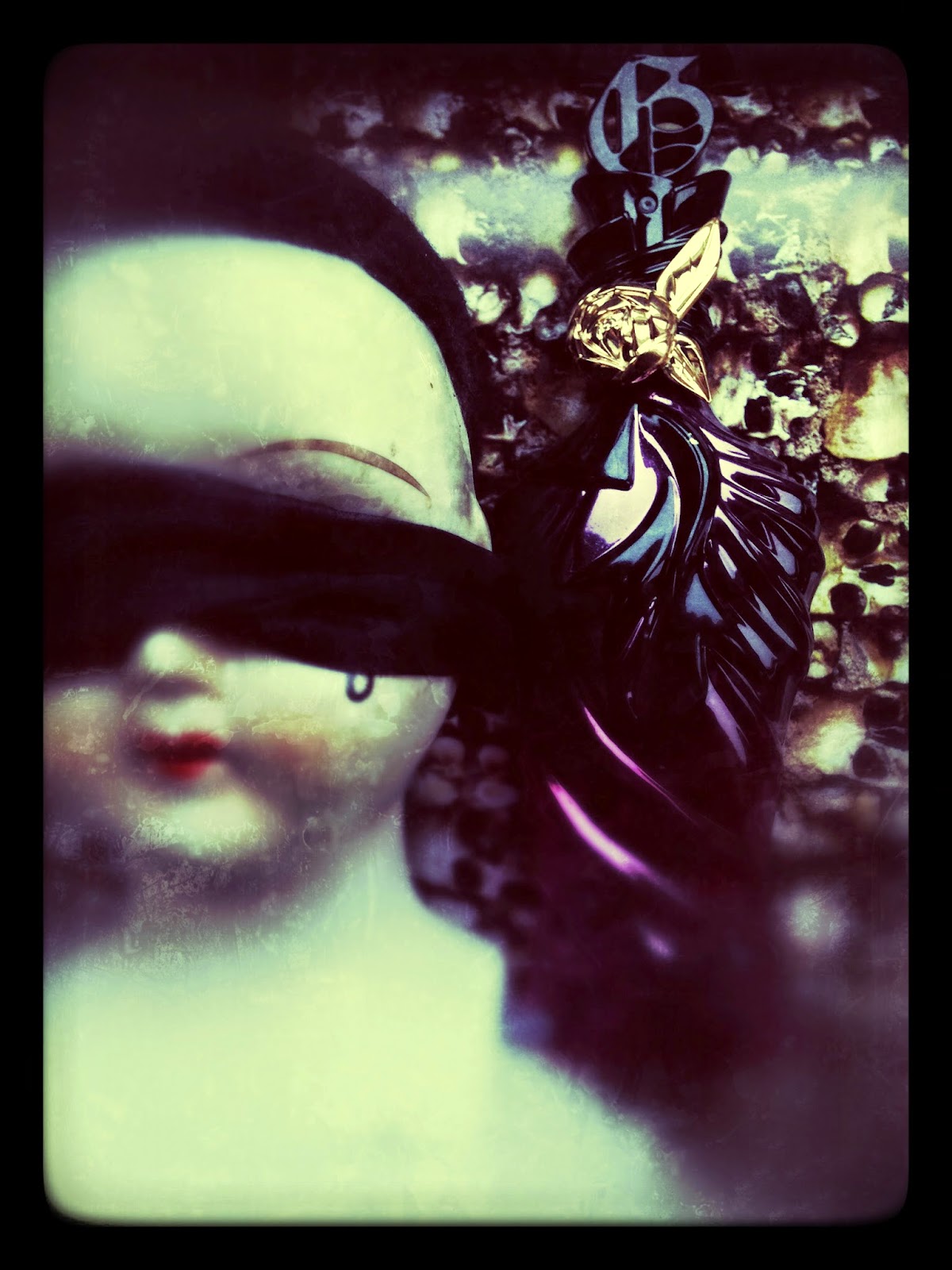 I have always adored this atmospheric perfume, it has a strange demanding aroma of the now, something edgy and hidden from view, masked and potentially dangerous; yet simultaneously radiating violet-dusted hours of yesteryear, a longing for love and rosy skin upon which to lay a weary head.

I bought Galliano’s debut eau de parfum the week it was released in Harrods in 2008. Our old head office used to be in lovely Beauchamp Place in London, around the corner from Harrods, which made shopping rather irresistible. The distinctive Joel Desgrippes bottle wasn’t hard to spot and I was kinda obsessed with the Mondino campaign fronted by the compelling amphibian-faced model Guinevere van Seenus. 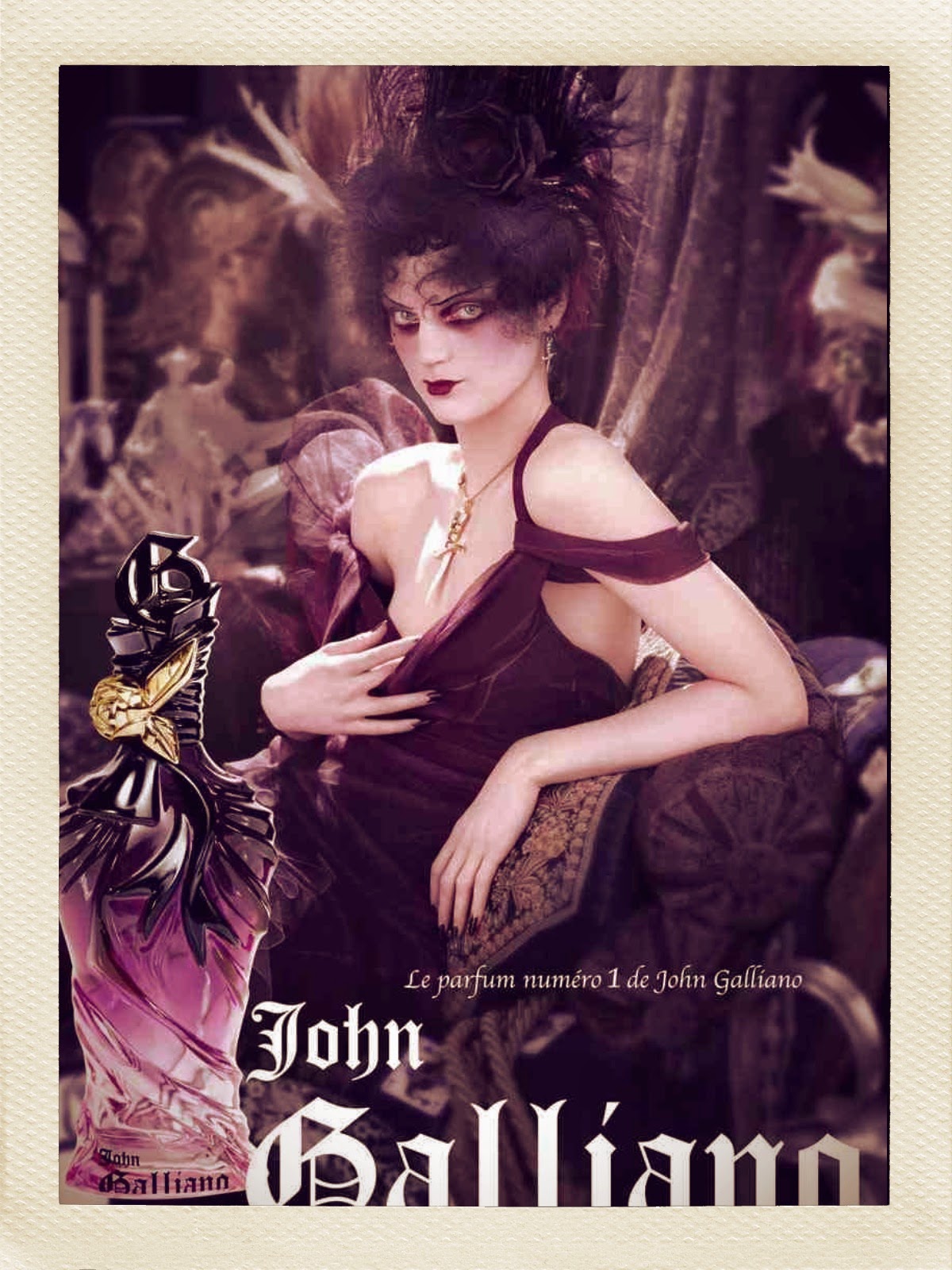 Now, this piece will not be any kind of apologist prose poem for the actions of Galliano. But I was and still am an enormous fan of his couture; he was an extraordinary fashion visionary who understood the extravagance and magnificence of the past and succeeded in translating that into a modern vision of couture transcendence. That this talent was fucked to pieces in one appalling evening of drunken, anti-Semitic ranting is tragic and probably inevitable considering the spiralling horror of his personal and high octane work lives.

He has spent the time since that terrible evening in Paris hidden away from he world, wounded and silent, emerging blinking uncertainly into the light on very rare occasions such as the wedding of his loyal friend Kate Moss whose wedding dress he designed. Its gentle simplicity and exquisite romanticism seemed to say I am still here, but bombast and drama are put away. You need a monstrous ego to survive in haute couture; it is a fickle, vicious and all consuming racket. The price is often bodies and souls wracked by abuse, booze, drugs, and sex; manipulated and isolated by those demanding the light burn brighter and longer. Like candles left burning too long, the flames will collapse and drown in waxen loathing. 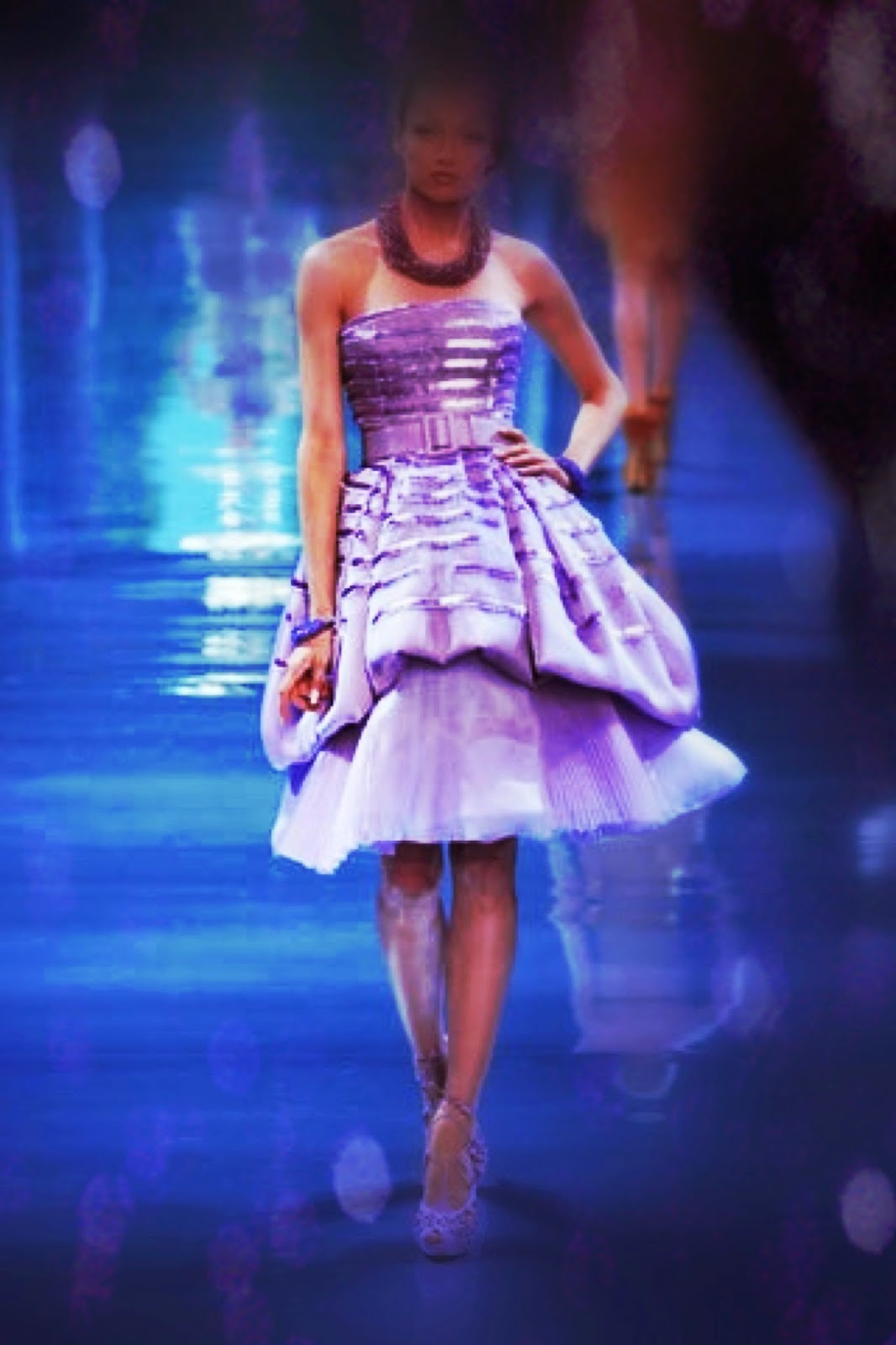 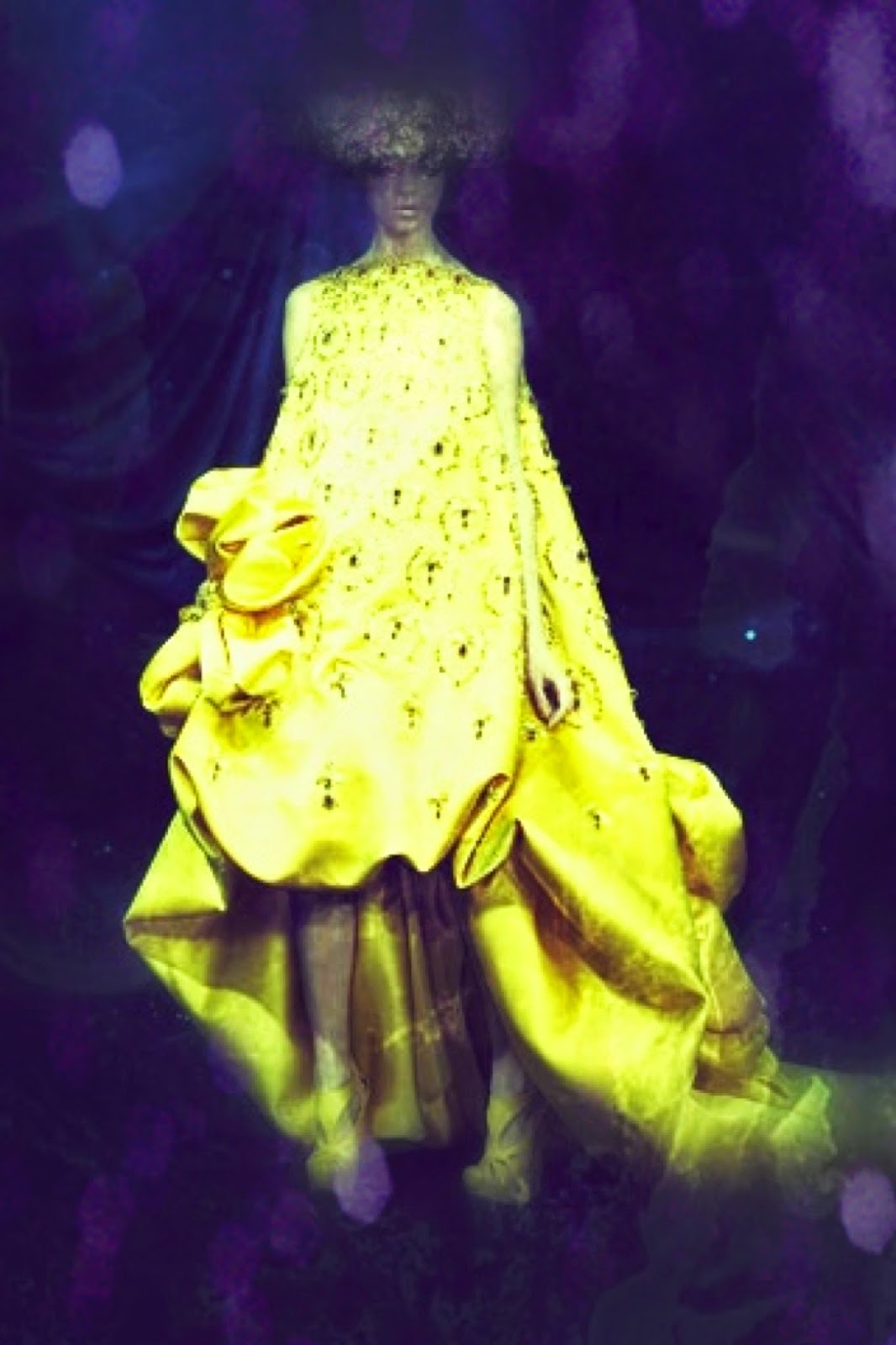 As his eponymous scent launched Galliano seemed noticeably more fragile but still working obsessively at his outrageous and glorious game. His Spring/Summer couture line was incredibly vibrant with billowing shades of mustard, burnt orange and shocking midnight blues. Echoes of Singer Sargent, Klimt and Galliano’s fetish geisha motifs all unfolded and flowed under space age millinery by Stephen Jones. He followed that with a tighter, more austere autumn/winter showing. I loved this collection of New Look silhouettes and huge jutting skirts, sleek column gowns and sensual swirling nipped in waists. The body appeared wrapped, tied and belted, cocooned erotically in shades of black, cream and white. 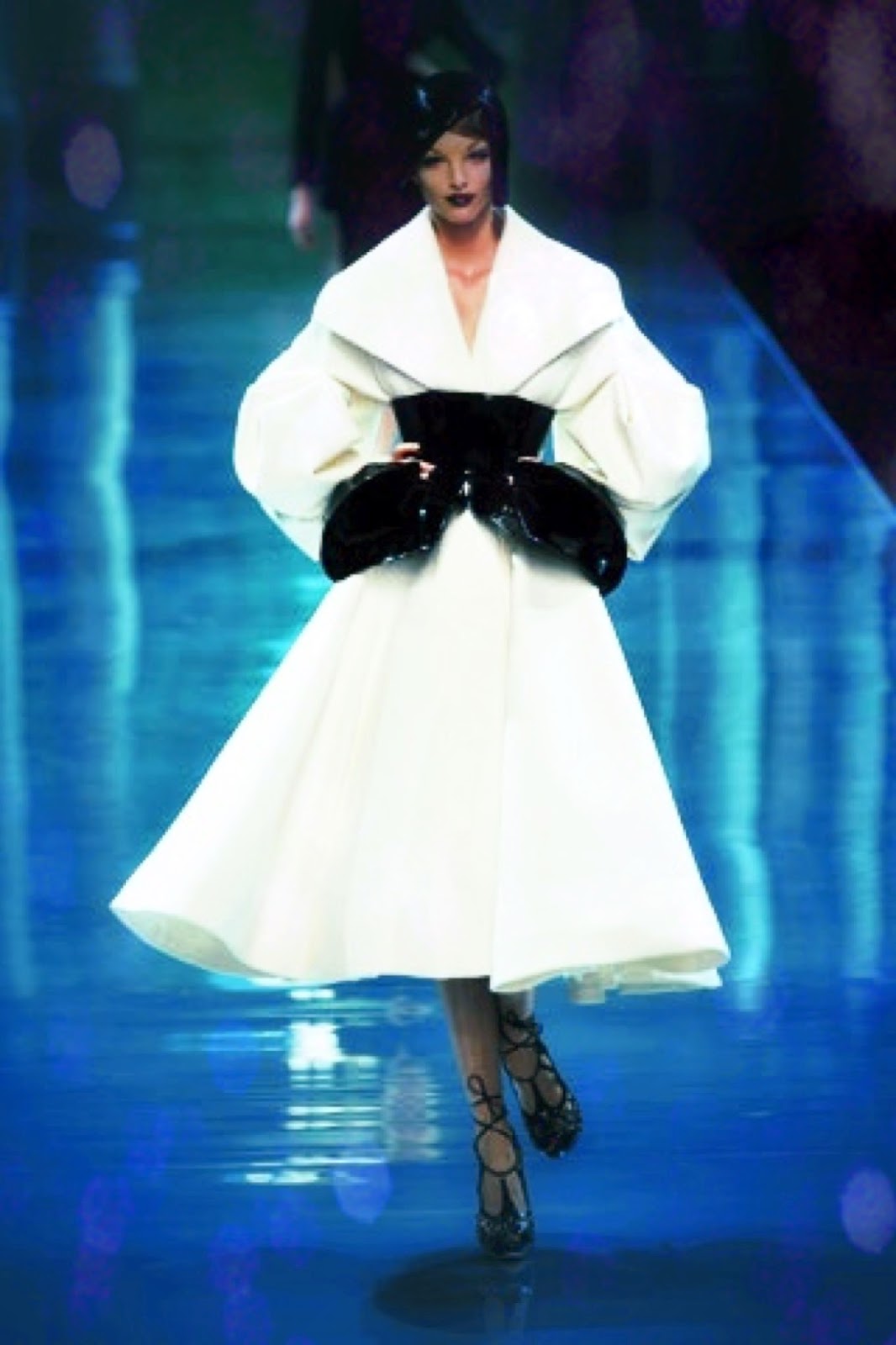 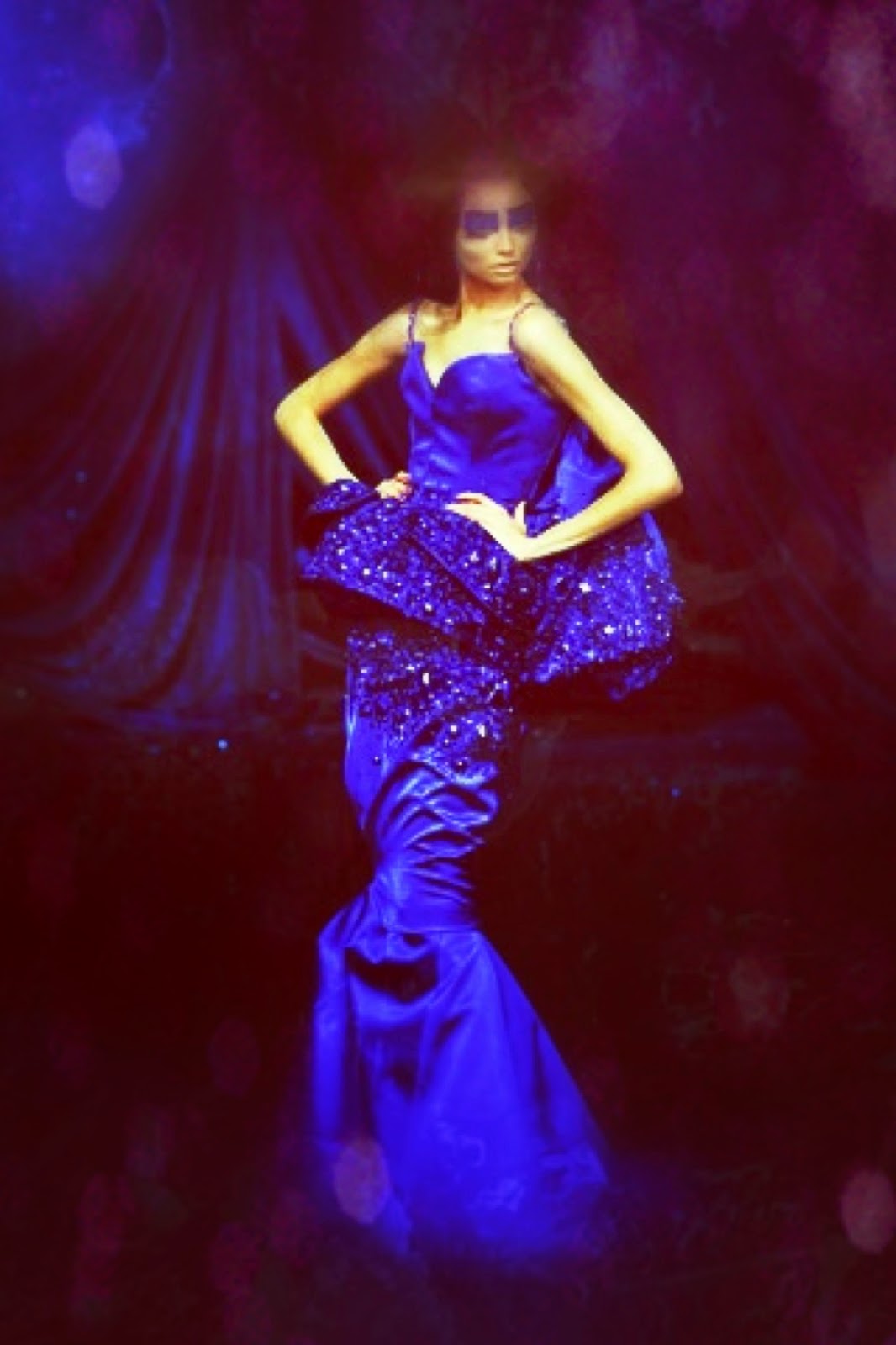 Macaroon tones of caramel, pistachio and violet augmented a potentially funereal palette. There were no huge surprises in either collection and you couldn’t fail to notice Galliano’s double-edged referencing – of his own hits and the obsession with Dior’s delicious past. His preoccupation with nostalgia and the couture rendering of leitmotifs would eventually exhaust him. Themes that once looked referentially modern and worked to perfection began to look a little tired and repetitive. Dior haute couture was starting to look dated. It seemed no one was prepared to say no to Galliano. Then suddenly, it was too late. 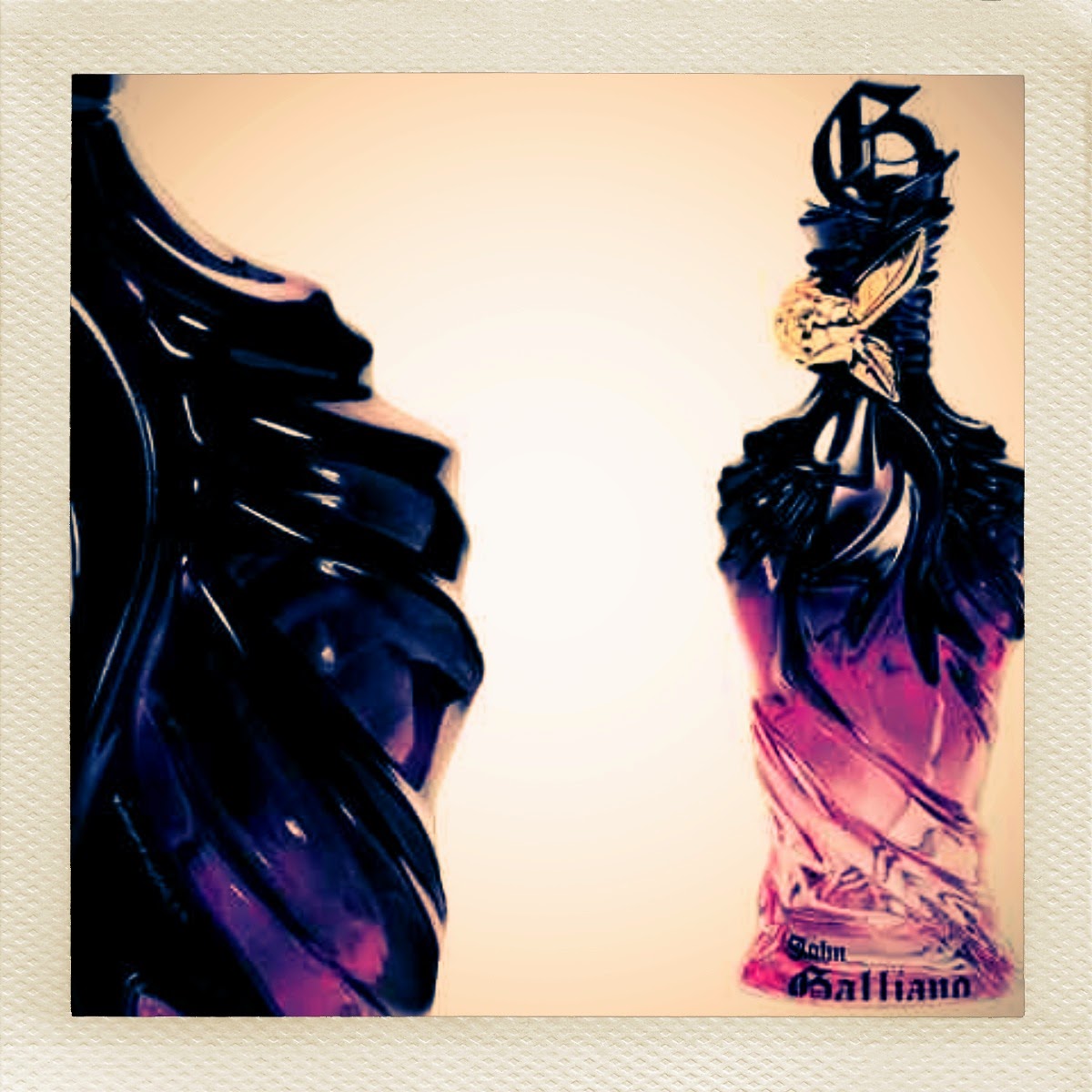 Galliano was involved in much of the perfume’s creation, from olfactive consultations to working with Jean-Baptiste Mondino on the imagery and ad campaign. Looking at the box and bottle in my study this evening, I realise that nothing else has ever really looked or smelled like this peculiar perfume. Joel Desgrippes’ bottle still divides opinion today on fragrance forums with its ombré cerise and berry-stained gown-form shape, cinched in at the neck with something resembling a revolutionary cockade. The bottle is topped off with a sprayer designed like a gothic font ‘G’ for Galliano, gaudy and grandiose. I personally like the bottle; I like a flacon that feels comfortable in the hand as this does. There is a doll-like quality to it, a sense of vintage chichi fragility, echoing again Galliano’s relentless obsession plundering of bygone themes.

The scent launched in 2008 and is the work of Christine Nagel and Aurelian Guichard. (There is a lighter, more playful eau de toilette version that launched in 2010 which while still quite charming has none of the eccentricity and velvet sensuality of the original). The eau de parfum is essentially built around a delicious violet note mixed with Monaco Rose and iris absolute in the heart to create the huge swell of yesteryear. Bergamot and lavender open up the scent; the lavender smells mauve and airy, proving lift to the romantic posy of floral heart notes. There is a whisper of sweet chypré to the mix from oakmoss and dry cedar in the base; they chime softly in the shadow of the moody violet ionones.

Violet is the odour of nostalgia, shorthand if you like for referencing the fin de siècle past implied by the aloof Guinevere van Seenus in the ad campaigns, her oddball features slicked in shades of crimson and smeared mulberry. Often dismissed as sweetie soft and old fashioned; handled with innovation and intelligence, violet can invoke lost worlds and textures with haunting and judicious delicacy. 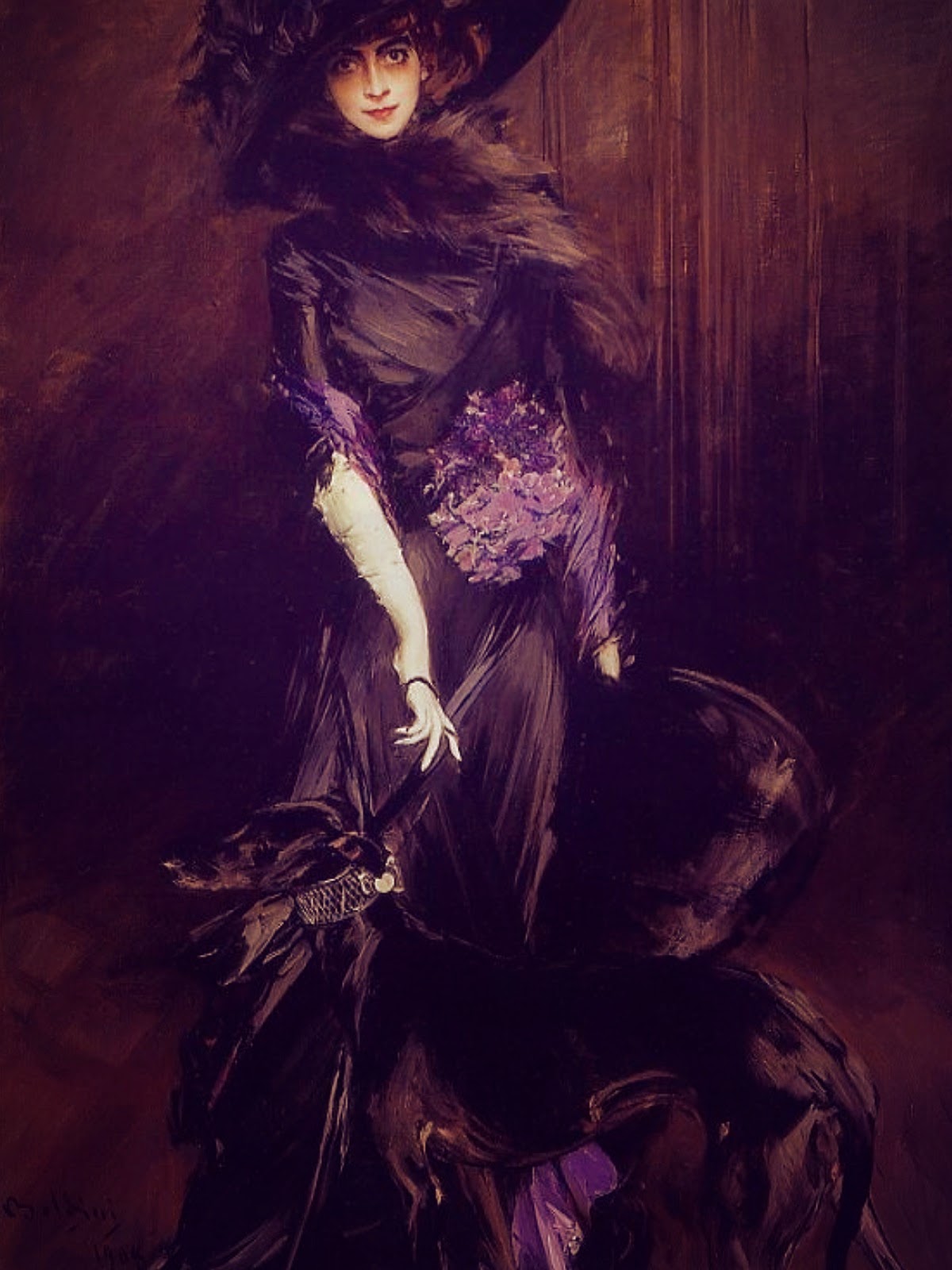 Galliano has often spoken of his love for Boldini’s lush portrait of the Marchesa de Casati, a true icon of her time. Wearing fabulous silken black with accents of bruised lavender she poses with a glossy coal-coloured Italian greyhound, radiating a dangerous sense of barely contained sensuality. Interestingly in the painting, Luisa Marchesa’s coquettish silhouette echoes the form (and to a certain degree the hue) of Desgrippes’ flacon. The carton is decorated in a kind of faux-painted version of Van Seenus, but oddly masculinised, with echoes of New Romantics swaying at the 1908’s Blitz Club and the album cover of Arcadia’s So Red The Rose. These touches of oddness destabilise and freshen any potentially sentimental overload. 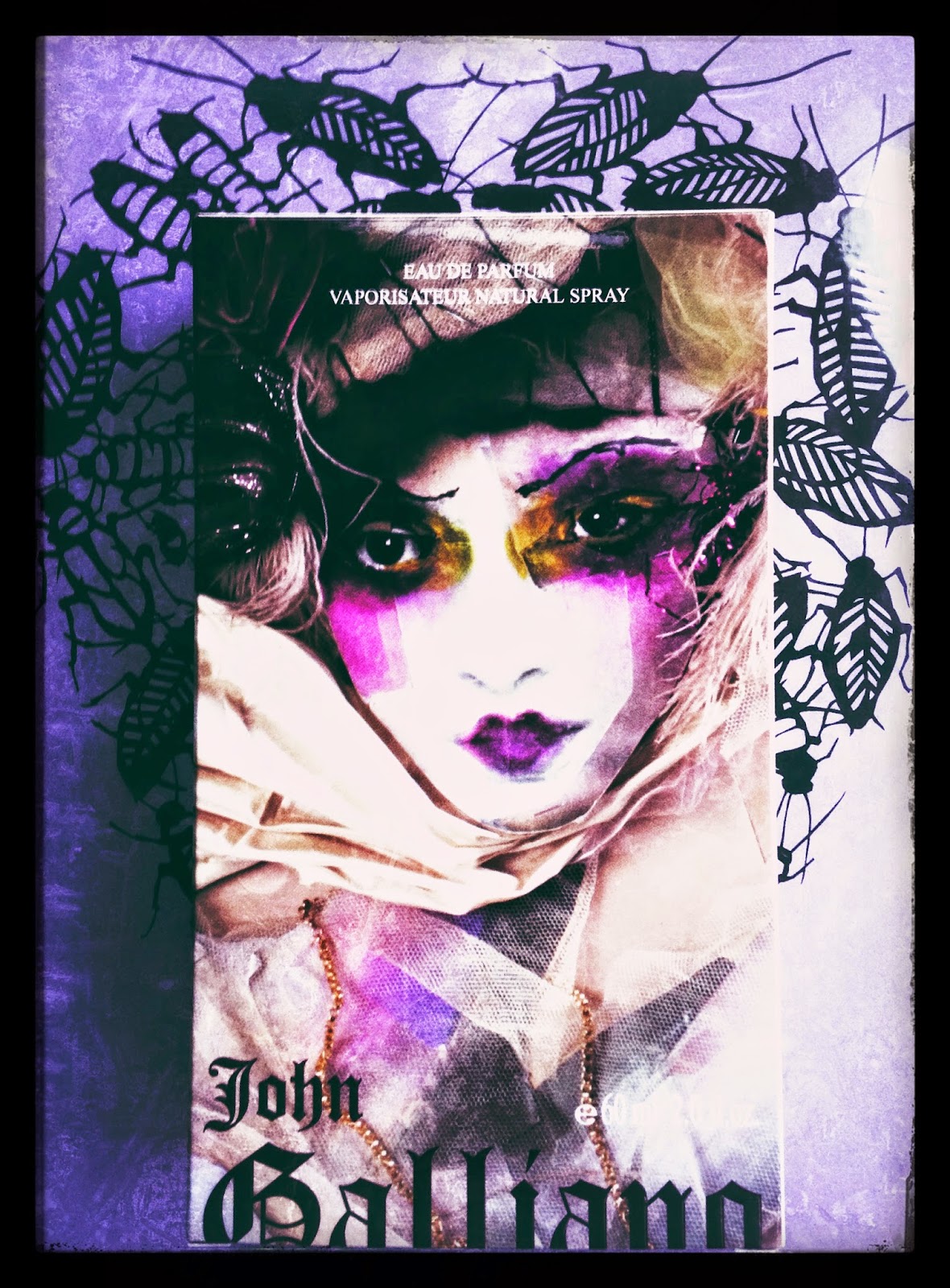 In an interview with L’Express Galliano said:

(I was so passionate about this project. In my mind I had a romantic scent with a very English style rose at the centre, powdered in style. The working title from the start was ‘Cocotte’ and after so much hard work, we now have this fragrance.) 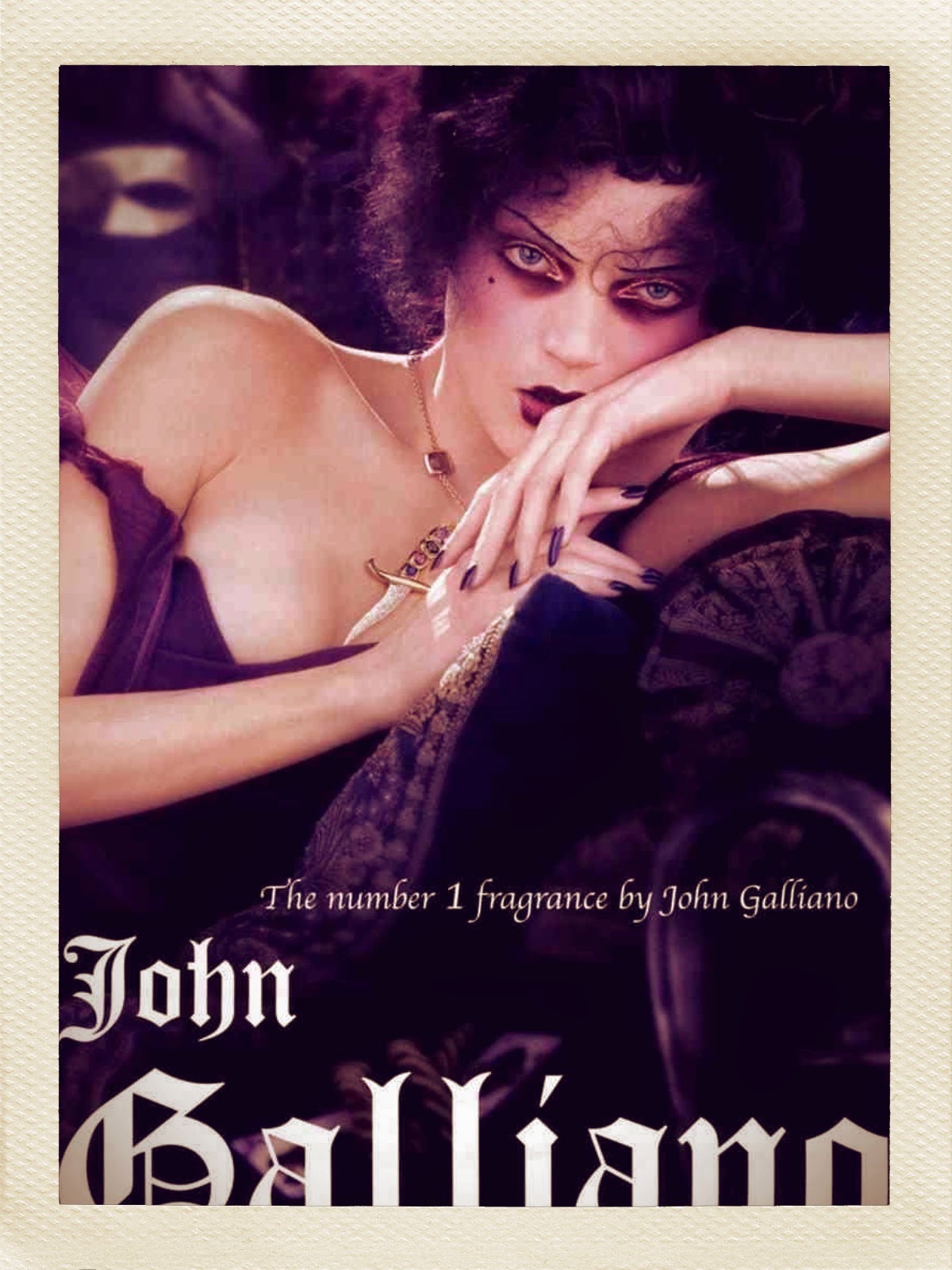 For me the Galliano scent is now imbued with even more melancholy and bitter tragedy since his excruciating fall from grace. There was always a sense chez Galliano of a hugely theatrical craving for approval, to show doubters he could achieve success on his own flamboyant terms. Like Alexander McQueen, both men had strong working class roots and this I think made their choice of profession fraught with doubt, pushing them to perfectionist levels of graft, craftsmanship and an often-difficult relationship with their own images and appearances. Both McQueen and John went under the knife to alter the way they looked. Lee had extensive liposuction and dramatically lost weight and John’s face slowly evolved a life of its own. Both men vanished, in different ways, Lee by his own hand and John by drunken, career suicide. But to all intents and purposes they were consumed by the terrifying and isolating demands of their high-pressure métier.

This fragrance will never be judged on its own merits, it is too tied into the Galliano aura, but it should be, it has a sense of lost beauty, odours drifting in time. For me it is the gauzy story of attic needlecraft, women with calloused fingertips, bound together in their carefully applied skills and handed down superstitions of blood on cloth and the symbolism of spilled needles and pricked digits. The windows of this room are shaded partly in left over lace, the light filtering through in shades of mauve, lilac and dappled ivory. The air is rich with the scent of embroidery, tumbles of cloth, plush nap, glue, hessian, muslin and the cold flash of oily shears. Into this vintage mix is mixed the seamstresses themselves; powder, hair lacquer, perspiration and perfume. There is the metallic hiss of steam, the dry folded aromas of starch, a scent I adore. I always starch my shirt collars and love the moment a hot iron hits damp starched cotton.

It is the hefty dose of aldehydes in the opening of the Eau de Parfum that generates the striking steam effect. It’s a bold move, not necessarily from an aldehydic point of view, but the dosage is big, claustrophobic and exciting. The saturated corsage of iris, rose and violet at the heart of the scent is pinned to a veiled and hazy backdrop with a lovely angelica effect, lending the blooms a candied fennel touch that speaks of settling dust and quietude. 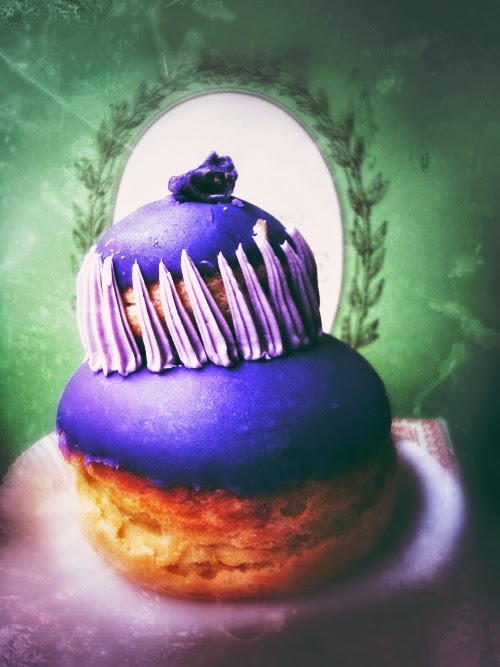 The rose/violet union is hardly new in scent. Used as it is to suggest vintage memory, powdered traces, dust, faded haze; make up, boudoir distance and a certain sense of floral antiquity. Used adroitly it smells lipsticky, smeared and achingly beautiful. Allied to iris, the three floral notes intensify in ephemerality as the fragrance settles into its opaque and vaporous drydown. What makes the scent so fascinating is the underlying tone of patisserie and sweet brioche that rises through the notes as the aldehydes buzz and gleam. It smells as if someone has rushed into the atelier with white boxes of delicious sinful goodies and broken the rhythm of the room so everyone can indulge.

This epicurean blend of retro floral delicacy, steam, starch, patisserie and musky indulgence has never smelled better. It has enormous flounce and pout, a real presence on the skin, throwing out skeins of vintage molecules wrapped in seriously elegant atmospherics. Marketed to women on its release, it also had dandy written all over it, the sheer bravado of sweet steam makes it irresistible. It has been discontinued and treated with the same pariah status meted out to John Galliano. It can be found for a song on Amazon in its various sizes. 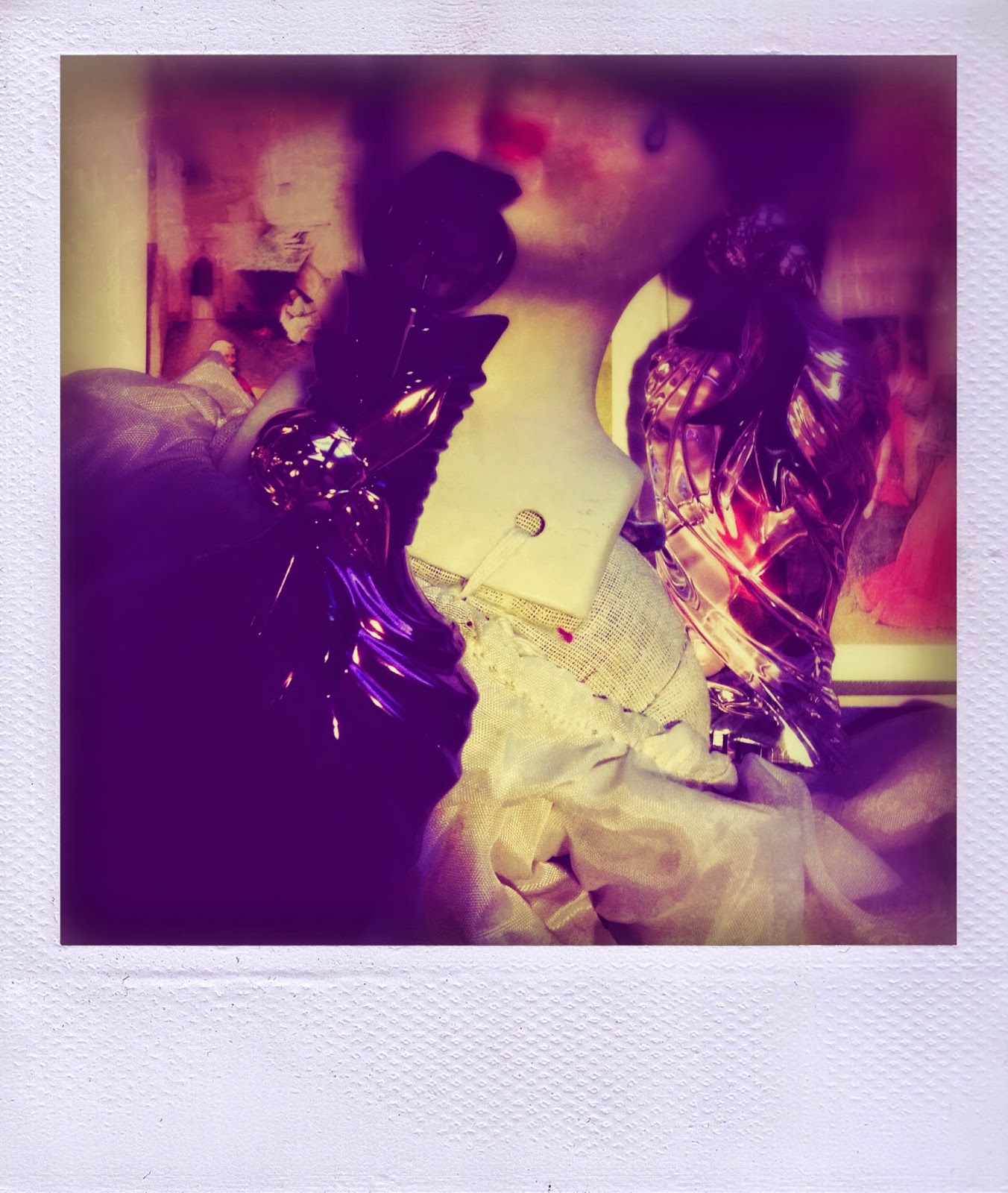 I’m overjoyed to fall in love with it all over again. It was a favourite then and a favourite now. In many ways it stands as a rather poignant reminder of Galliano’s fall. His tenure at Dior has been effectively erased and yet Raf Simons is essentially recycling himself and his own work at Jill Sander. It is not really Dior. Galliano’s flamboyancy and passion can never really be lost, his work at Dior was far too extraordinary for that to happen. But the man will always be an apologetic shadow of himself, moving carefully and quietly, attempting to heal and perhaps be a little forgotten. I wonder if he ever thinks of his beautiful scent, created with such joie de vivre and devil may care carousel? I hope so, it is remarkable and smells of couture, lost beautifully in time.

I’m not sure anything will smell like this again, roses and violets will come and go, aldehydes will haunt and dazzle the senses for years to come; but this peculiar, flamboyant synthesis of atelier ghosts and brazen chic walks a dimming runway in an empty hall. Galliano’s hubris has tainted any legacy he might have had. It is incredibly hard to be objective about any aspects of his work without the spectre of that fateful café evening rising up to darken the mind. I hold to my opinion that Galliano’s debut eau de parfum is a beautiful, personal and affecting scent. Oddly, his downfall has only augmented the glamour of the aroma.