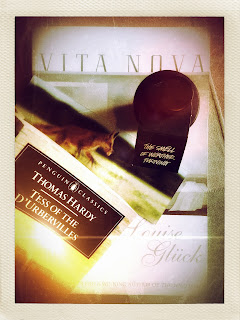 You saved me, you should remember me.

The spring of the year; young men buying tickets for the
ferryboats.
Laughter, because the air is full of apple blossoms.

When I woke up, I realized I was capable of the same
feeling.

I remember sounds like that from my childhood,
laughter for no cause, simply because the world is
beautiful,
something like that.

Lugano. Tables under the apple trees.
Deckhands raising and lowering the colored flags.
And by the lake’s edge, a young man throws his hat into
the water;
perhaps his sweetheart has accepted him.

and then unused, buried.

Islands in the distance. My mother
holding out a plate of little cakes—

as far as I remember, changed
in no detail, the moment
vivid, intact, having never been
exposed to light, so that I woke elated, at my age
hungry for life, utterly confident—

By the tables, patches of new grass, the pale green
pieced into the dark existing ground.

Surely spring has been returned to me, this time
not as a lover but a messenger of death, yet
it is still spring, it is still meant tenderly.

It is the final verse of this poem that haunts me.

Vita Nova, (new life) was published in 1999. The eponymous poem, Vita Nova for me, looks at loss and memory. A lover gone. Childhood recollections surfacing as gestures and minutiae unfurl scenes and elemental images in the poet’s fertile, wandering mind. It is a poem that seems fragranced; sun, apple blossom, cakes, grass, tables and the promise of spring, the hint perhaps of rebirth, shift and change.

You saved me, you should remember me.

I find intense melancholia and uncertainty in Gluck’s airy depiction of a European childhood. Echoes of things vanished. It is a painterly scent, depicted in poetic small strokes laid down over a larger more resonant canvas. A little like Impressionism, the details shift, merge and finally coalesce into sharper focus if you step back and allow distance to settle between you and the language.

The Smell of Weather Turning is still the best piece of scented work from Gorilla in my opinion. I know Breath of God is highly regarded and quite rightly so, but The Smell of Weather Turning marked the beginning I think of a beautifully mined set of perfumed beliefs in English pagan and folkloric past. This obsession of Mark and Simon Constantine’s became apparent in the last set of new releases from Gorilla, or Volume 2 as Gorilla like to refer to them. With influences and inspirations as diverse as smugglers, Kerouac, Sikkim, English folklore, jazz, electronic surveillance and ancient barrows, Gorilla produced a startling and highly original selection of deeply wrought formulae. New packaging and a marked difference in olfactory style really set these new releases apart. They have depth and resonance beyond the bottle, that is rare in perfumery. Each scent is wrapped up in an olfactory mythology of its own. They are singular and divisive as all truly interesting things should be.

I have blogged on The Smell of Weather Turning, it was a scent that really caught me unawares, causing huge emotions and memories to well up and overwhelm me. The scent is made form ingredients only available 5000 years ago: oakwood, beeswax, roman chamomile, English peppermint, nettle, mint and hay. This weird astringent smeared blend transported me back to my African childhood, standing in a dusty yard, watching a column of ants as the sky tilted and the air ran dry. The storm that followed was both utterly terrifying and exhilarating at the same time. Debris everywhere, and the most extraordinary smells. Loamy odours of smashed earth and shattered marigolds, drowned acidic insects and steaming soil.

The fragrance has druidic origins and is supposed to represent the scent of a landscape after a thunderstorm, the sudden scudding of clouds across the sky, rain fleeing. The sun appears and everything is warm again, safe.

My reading has always been deeply personal, influenced as we all are by our upbringings and olfactive influences as we grow, love and experience life. In my blog piece I mentioned Hardy’s Tess (one of my favourite novels) and the appallingly calm moment they come for her at Stonehenge in the early morning. This scene would reek of The Smell of Weather Turning hanging in the damp Wessex air as the police and Angel wait for Tess to wake, to take her away to face her terrible inevitable fate.

This strange poignancy is why I thought of it for Vita Nova. At once, green and medicinal, a sharp and inclusive promise of things to come and yet pervasive, forcing memories to rise and fall. A suggestion of spring, but a reminder too that things die and the heart stays forever broken in places. A scent that conjures landscape and elemental forces for a poem about emotions lost amid the delicacy of shattered memory. Both concern the emergence into light from darkness.

A new life. Can we truly ever really do that? Memories haunt and follow us. It is in their nature to do so. But we should embrace this. The Smell of Weather Turning is a profoundly elemental scent, tied to landscape and memory, notes that have purpose and resonance, possess reason. At first glance poem and scent seem worlds apart, but the almost claustrophobic blend of notes, cast across ancient skies and Gluck’s litany of rose-tinted obsessive recollections echo and blur across each other meeting finally in the final skin-shaking lines.