Poetry & Perfume I – 'For My Lover, Returning to His Wife' by Anne Sexton & 'Onda' by Vero Profumo 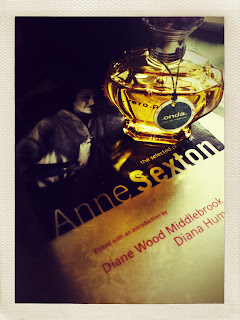 For My Lover, Returning To His Wife

She has always been there, my darling.
She is, in fact, exquisite.
Fireworks in the dull middle of February
and as real as a cast-iron pot.

Let's face it, I have been momentary.
A luxury. A bright red sloop in the harbor.
My hair rising like smoke from the car window.
Littleneck clams out of season.

She is more than that. She is your have to have,
has grown you your practical your tropical growth.
This is not an experiment. She is all harmony.
She sees to oars and oarlocks for the dinghy,

has placed wild flowers at the window at breakfast,
sat by the potter's wheel at midday,
set forth three children under the moon,
three cherubs drawn by Michelangelo,

done this with her legs spread out
in the terrible months in the chapel.
If you glance up, the children are there
like delicate balloons resting on the ceiling.

She has also carried each one down the hall
after supper, their heads privately bent,
two legs protesting, person to person
her face flushed with a song and their little sleep.

I give you back your heart.
I give you permission—

for the pale flickering flare under her ribs,
for the drunken sailor who waits in her left pulse,
for the mother's knee, for the stockings,
for the garter belt, for the call—

She is so naked and singular.
She is the sum of yourself and your dream.
Climb her like a monument, step after step.
She is solid.

As for me, I am a watercolor.
I wash off.

I wanted to write about a scent of return. The scent of a lover returning to his wife, indelibly marked by perfume. As if to say….you may be going back to her….but you will always smell of me.

This is what I wanted to convey and explore.

Anne Sexton’s poetry is tough and confessional, often messy and overtly manipulative. But her best work is horribly compelling, lit with rage, humour and lacerating awareness of her crumbling, depressive and fragile world. After numerous attempts at self-murder, on the 4th October 1974, wrapped in her mother’s fur coat she finally died in her garage in a carbon-monoxide filled car.

In my younger years I played the homme fatal; enjoying the dangers of sexual subterfuge and to be honest not really caring about the damage I left in my eager wake. I loved the sound of a shattering marriage, blooding my feet on the pieces of broken relationships. I had a worrisome ability to tug at sexual threads until they unraveled. There were times I felt secure, real, the solid incarnation of desire, other times I knew I was temporary.

Let’s face it. I have been momentary.
A luxury. A bright red sloop in the harbor.
My hair rising like smoke from the car window.

We enthrall and bind in so many ways. But I hated being left as they backtracked on promises and slid on back to wives, boyfriends and lovers. I only had so much power. And I suppose in reality I wanted the excitement to remain electric, dramatic and exquisite. This performance, this craving for attention was always scented, doused with perfume and cologne. I was quite deliberate in my anointing of skin. Fragrances like Grey Flannel, Antaeus, Sagamore, Minatore, Azzaro, Sun, Moon & Stars, Jicky, Tabac Blond and Givenchy Gentleman dripped and poured across rendezvous flesh. I wanted them reeking of me. I wanted them to return to others and arouse sniffed suspicions and lashing ire.

Onda is a work of unparalleled dirty beauty. Shocking and intensely desirable. Demanding to be inhaled profoundly off the skin, licked off. It also causes the senses to rebel, reel from the mosaic build of notes and effects. And then return again and again for more.

I had been reading about Vero Kern and her quixotic and highly regarded work for some time. A remarkable lady, Vero launched three perfume extracts, Onda, Kiki and Rubj in 2007 aged 67. An obsession with olfaction and art had created in Vero a desire to compose fragrances that echoed the great perfume traditions of the past but also somehow had a core of modernity that might unsettle and intrigue a modern wearer. Based in Zurich, Vero continued to release eau de parfum versions of the original three and a fourth scent Mito was launched last year to huge acclaim. She once said she wanted opulence, originality and eroticism in scents….

I think wearing and experiencing Vero’s work is the closest we will get to experiencing how fragrances might have smelt in the heyday of classic perfumery, scents laced with civet and castoreum, nitromusks and thick swathes of iso-butyl quinolone. I imagine loaded rooms awash with decadent skins, secrets, masks and promises of endless night.

Rubj is intensely pornographic, cumin & tuberose mixing like illicit lovers on the skin. It smells whorishly smooth and close, just fabulous. It reminds me of the film L’Appollonide (Souvenirs de la Maison Close) by Bertrand Bonello about the saturated, sensual and wearisome life in a Parisian brothel in the early twentieth century. The film is shocking in places and vividly realised, with disturbing surrealist moments counterpointed with moments of joy and bawdy humour. My friend Mr E wears Rubj with great style and louche knowingness. 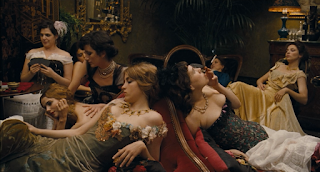 Kiki ( a homage to Man Ray’s muse Kiki de Monparnasse) is an explosive burst of lavender tempered with unctuous caramel and pepper. One of the best lavender fragrances I have ever smelt along with the simple but evocative Caron Pour Homme. The lavender burns across the skin like a sugared fire, the flames mauve and emerald green. Apparently it is Vero’s favourite among her fragrances. The eau de parfum is layered and swirls like weather. The extrait is pure and hits the senses like a bell being struck in a heatwave, high, clear and compelling.

But Onda… oh Onda is something else entirely…. sex in toilets, piss and urinal cakes, smeared fruit, sweat and sweet sweet skin. This may sound off-putting and weird but I assure you that on the body, Onda is one of the most beautiful and confrontational perfumes you will try. I find myself horrified by its allure yet Vero’s incredible balancing of passion fruit, citrus notes, basil, honey, vetiver, musks and patchouli has produced something of raw power and sensuality. I have shown this scent to some people who have instantly paled and recoiled, so startled by the visceral thrust of the construction. Others cling to your wrist like drowning sailors to driftwood.

This scent is for all my lovers who ever returned to their wives, men whatever. They may have had you back, but I made damn sure you reeked of me forever. I may faded like the watercolour of Sexton’s poem, but you will be indelibly marked by the power and unruly nature of fragrance. Onda is the encapsulation of that power. They will wear something safe, Chanel or Prada say, all safe harmony and dignity, unobtrusive and real. Onda is the hammer to conformity.

Onda is perfumed violence, sex and the unexpected. I have a feeling Anne Sexton would have approved.


For more information on Vero Kern please follow the link: