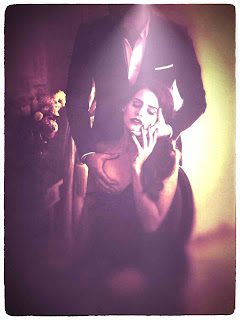 I was contacted by Viktoria Minya, a young Hungarian perfumer, now based in Paris. She asked if she could send me a sample of her debut scent for her eponymous line. I said yes. This is of course no guarantee of a good review, however… the more I read about Ms Minya and her background steeped in the richesse of classical perfumery I had a feeling that Hedonist was going to be something very special indeed. The sample arrived after a worrying postal delay, had it fallen foul of draconian UK postal regulations…? But one morning, there it was. As soon as it melted across my wrist and the heady aromas of peach and smoky blossoms rose into the air I knew I was in love.

Hedonism is a school of thought that advocates the singular pursuit of pleasure or devotion to pleasure of the senses. In other words, pleasure is the only good. It is one of my favourite words (and concepts too if I’m being perfectly honest…)and I’m surprised that no one has thought to name a fragrance this before now. It implies a relinquishing of oneself to sensuality, a letting go of constraints. In an ideal world, all perfumery would do this, but then we would be continually satiated, exhausted by our own desires.

’I believe that perfume should crown your day, it should be a source of pure joy, something ceremonial, something exceptional’. Viktoria Minya 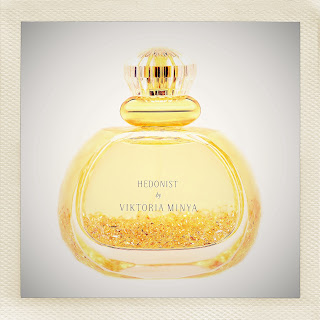 Her passion for fragrance and outstanding components is very evident in the expert blending and the instinctual understanding of structure. This glamourous and determined young woman has spent many years preparing herself. She worked in HR for a while, aware that the realisation of her perfumed dream would be costly and she would need different kinds of experiences behind her and financial capital. Spare time was spent sniffing, sampling, categorising families and fragrances and planning how her Viktoria Minya line would evolve. Training at the Grasse Institute of Perfume deepened her knowledge and desire to create something luxurious and personal from the most beautiful raw materials, something alluding to the golden age of perfumery, something hedonistic.

This smoked jazz peachy opening is sublime. If you can imagine the soft fuzz of ripe peach skin and breaking the tension of this ever so carefully with a nail, letting the juice ooze out and roll down the flesh. This is the realism and shock of Viktoria’s fruit note. This drips into the smoke and ashes of a carefully arranged tobacco effect. I love tobacco in scent; I guess it subliminally fills the space left behind by my abandonment of Marlboro Lights and Camels all those years ago. Usually tobacco notes are moist and dark with treacly hay and leather facets. Hedonist does something a little different. It draws the note back to ashtrays and stubbed out broken cigarettes in late night bars and cafes. A nostalgic smell of my Paris years, overflowing cendriers, sticky Bastille bar tops and flirty nightcaps.

The rum adds a sweet poignancy, a whiff of blossom honey that leads the senses down to the indolic glowing heart of Hedonist. Indian jasmine, Tunisian orange flower and the delicate tea tones of osmanthus that beautifully counterpoint the sweet ash accord and peach note. It is the jasmine however that rises and softly explodes Hedonist across the skin. It is creamy and green with a drizzle of crème de banane that compliments the vanillic rum note to perfection.

Touches of Haitian vetiver and Indonesian patchouli have been used like background colours to give harmony and depth to the fruit and smoke accords. There is lacquer over these olfactory effects, adding a sheen and antiqued effect as the fragrance settles out. There is just enough patchouli to singe the peach skin. It the careful tiptoeing back and forth of sweet, soft, ashen, juicy and shadowed and sensual that makes Hedonist so interesting to wear.

I have an image of Hedonist as a 20s moll, lost in emotional transit. Beauty on the cusp of exhaustion, swathed in sadness, a perfect face, flawless skin, and lips red like blood. Her perfume is erotically sullen and wanders a midnight bar like an unsettled spirit. Smoke from endless neurotically smoked cigarettes is wreathed into her hair and veil. The cut glass ashtray in front of her glistens with lipstick stained filters. Beauty, bravado and vulnerability. All elements reflected in the stylish and reverential way Viktoria has assembled her influences and materials.

‘I wanted my perfume to be an ode to the golden age of perfumery……Hedonist is a celebration of the infinite delight of the senses and it takes you back to the roots of traditional perfumery, it returns the forgotten and majestic nature of applying perfumes.’  Viktoria Minya 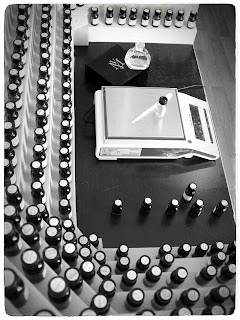 It is difficult for me to talk about the peach note in Hedonist without referencing Jacques Guerlain’s masterpiece, Mitsouko from 1919. A classic chypré, Mitsouko has been all but killed by reformulation. It is virtually unrecognisable as one of the most brilliant and original formulations of all time. Akin to the shock of seeing favourite old movie stars step back into the harsh light of day, years kept desperately at bay with repeated surgeries and needles. They seem like different people, personalities lost somewhere along the way with crows feet, laughter lines and self-respect. The often denied re-formulation of fragrances has much the same effect. They may look the same, have the same name but the reality is a shadow of the original, tweaked and stretched, cleansed and pinched. No light behind the eyes, dead scent walking.

Roja Dove in his book The Essence of Perfume wrote: ‘I wore Mitsouko for six months short of 30 years, but stopped wearing it when I could no longer recognize the original scent’.

It has changed so much. This is so sad, it was a truly magisterial perfume to wear. One felt transported. The luscious peach note (a gently handled C14 aldehyde), mingling with luminous jasmine and counterpointed with delicate touches of cinnamon, vetiver and the fabulous oakmoss base. And of course the near mythical Guerlinade in the base, rich and pervasive, the mysterious blend of vanilla, rose de mai, orange blossom, bergamot and whatever other touches of olfactory magic Guerlain add to the mix. When the re-formulation became common knowledge, fragrance lovers started scouring the world for any original stock. Olfactory panic set in. Finding any now is nearly impossible. I used to wear the original as a showy, foul-mouthed club kid, dancing into the early hours and staggering home to collapse into bed, sweaty and reeking of cigarettes, Guerlain and boys. Good times.

Jacques Guerlain was inspired to make Mitsouko by Claude Farrère’s novel La Bataille about the impossible love between the wife of a Japanese admiral and a British officer. Her name is Mitsouko. Desperately in love, but honour bound to hide her feelings deep inside her heart, Mitsouko’s love is silent and dignified as she waits for the outcome of a battle to see which man will return to her.

The jasmine unveils itself slowly in Mitsouko, as if it too is held back in the heart. The peach note is strong, the skin and flesh a homage to the white perfect powdered skin of our heroine. It as if she stands motionless, waiting for her lovers in a trembling wood after spring rain. The oakmoss base was shadowed and strange, adding a sense of unease and tension to the formulation. Sadly the punitive regulations of using oakmoss have cut and slashed Mitsouko and her chypré sisters until their sweet inky raiment are threadbare.

The trick to Mitsouko was the suggestion of sweetness, a tantalising lick of something. The peach added a whisper of flesh. Nowadays, peach notes are generally used as gourmand overload, sloshed in with little attention to effect or outcome.

With Hedonist Viktoria Minya has chosen, however subconsciously, to echo this melancholy peach and jasmine accord but her translation is more sensual and world-weary. The skin is on fire and the voice tells a story of loves lost. This only serves to reinforce the exhausted glamour gangster girl chic that Hedonist exudes as it rolls over the skin like exhaled plumes of cigarette haze. I love the rummy pollen facet that smells tawny and golden. This kiss of clever sweetness reminds you that Hedonist has been created by a woman who really understands how she would like her own skin to be scented. The more I wear it, the more I fall under its spell. I was watching a Dietrich film the other day and realised that the strange and beautiful vision of Drag Dietrich, smoking provocatively in men’s tenue de soirée was a little like Hedonist…the softness inside the rather outrageous and charismatic performance. I watched and sniffed my arm until the two became one. 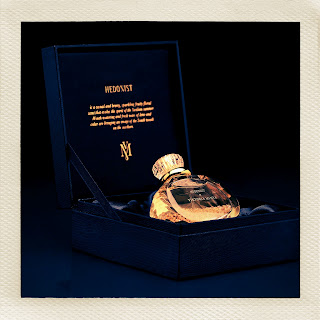 Let’s talk about the packaging and bottle. I have not actually seen it in the flesh as it were, but Viktoria sent me some crisp hi-res images. She is a sensualist, that much is apparent from the juice. But her preoccupation with the senses extends to the flacon, box and marketing. In an interview with Sandra Raičević Petrović for Fragrantica, Viktoria mentioned creating a private label fragrance for Candori, which involved using crystals in the bottle. She has revisited this idea spectacularly for the Hedonist concept. Generally speaking I am not a huge fan of suspended elements in fragrance or booze for that matter. I think it’s a little tacky and gangsta, something for the cruise ship crowd. However the detail and sheer luxury of execution have swayed me on this one. Hundreds of Bohemian crystals roll and flow inside the scented juice like frozen champagne bubbles. They add a fairytale quality to the finished bottle that looks quite fabulous. The box is wood and finished in a faux-snake effect. This is the only part I am not too keen on, but it is a small detail overall for me and when you look at images of Hedonist nestling in its box, crystals glistening, everything comes together in a multi-sensual whole. You realise how talented Ms Minya is and how hard she has worked to create something this heart-breakingly beautiful and sophisticated. There are times when I despair that glamour is dead. Not true. Her name is Hedonist and she is fabulous.

Disclosure: Review was based on a sample provided by Parfums Viktoria Minya.

For more information on Viktoria Minya, please click below:
http://viktoriaminya.com/en