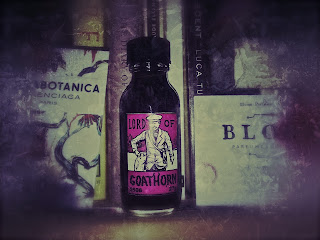 Well well, I finally got my hands on Lord of Goathorn. It was personally delivered by Lady Duffy, who urged me not to open it at work as if it would flatten trees and atomise walls. Now I was scared. I packed it carefully in tissue paper and carried it home with me.

The fragrance or anti-fragrance was inspired by Goathorn peninsula near Poole in Dorset, the home of all things Lush. The scent is a disturbing ode to the longshoreman caretaker of Goathorn whose boat was often commandeered by smugglers into return for bounty. The peninsula is private with a distinctive wild atmosphere. There are prehistoric overtones to the landscape and oil is pumped discreetly by BP from below the surface of the archaic landscape.

When I visited the Gorilla Bus last month, they didn’t have Goathorn for me to sample and I heard very conflicting opinions on it, ranging from ‘unhygienic’ to ‘strangely compulsive’. My Bus Guide Cassie said that after the somewhat shocking ‘fish sauce’ top note, the development and drydown were weirdly striking. I am all for strange in scent, I like fragrances to push at limits. Fragrance as abstraction is a rather arch new trend in perfumery as creators search further afield for increasingly elaborate and esoteric inspiration. Also the constant evolution in fragrance technologies is allowing perfumers to become more and more ambitious and experimental in their formulae and olfactory reach.

Goathorn is another one of the Set in Stone fragrances that Gorilla unveiled at Lushfest on a specially constructed stone circle. It smells more like a condiment than scent, but I’ll get to that. Every now and again the industry throws up utterly bizarre oddities that defy any real classification. Like more experimental art that repels and intrigues at the same time, requiring a much more complex of values and senses to deconstruct and understand, these fragrances throw an olfactory curve ball, confounding expectations with fucked up notes, twisted structures or seemingly no structures at all.

I have a number of messed up smells in my collection. Les Sécretions Magnifiques by Antoine Lie for Etat Libre D’Orange is one of the creepiest and yet sublimely spun essays in scented disgust and cutting-edge fragrance design. Inspired by various bodily fluids this briny vicarious floral is a unsettling saline vision of perfumery rarely explored in scent. It has an overwhelming wash of metallic notes, a mucid facet that really can shock. The tongue-on-battery zing it has, the whiff of ferrous oxide, of rust and blood can make it very uncomfortable to smell. I spray it through my clothes, especially on my Harris Tweed (the dense fibres adore it….). It diffuses like poison, corroding the senses, but as a warped vision of the body as a flower exuding it juices it is without parallel.

The Unicorn Spell by Les Nez is another love/loathe concoction. Isabelle Doyen, the nose behind many of the Annick Goutal scents is the creatrix behind the oblique and controversial Les Nez fragrances. Let Me Play the Lion is quite amazing, dry as dust, an anguished cry of smoky pain across an echoing expanse of dunes and airless sky.

The Unicorn Spell however stops you in your tracks. It is GREEN! Like snapped snow peas or an avalanche of green beans poured over a frozen glittering park in the night. I hated it, but could not stop smelling my wrist. The Les Nez guff re Unicorns and milky breath etc is quite ludicrous, but the technical beauty and ambition of the scent is astounding. As the emerald blast settles, a very ghostly violet notes filters through and almost suffocates the skin. I have tried to wear it a number of times, but like a dark room with a malignant presence, it just scares the hell out of me.

A recent addition to my scented cabinet of curiosities is a sample of Tindrer by Amsterdam-based niche whizz kids Magnetic Scents. They have created beautiful and unique scents, including Untitled No 2, a very seductive and warming photo-realistic riff on chai latte with vanilla, cocoa and Indian spices. The Gerhardt Richter of scent making, Magnetic Scents are portraitists. I don’t want to say too much as I am preparing a longer post on three of their fragrances. Tindrer is Danish for sparkle and this very peculiar collection of notes was inspired by a song of the same name by the band Under Byen. Purportedly a portrait of clear spring Scandinavian days with trembling weather patterns of rain and clear blue skies. Notes of cypress, galbanum and a wet soil accord float over an off-beat riff of cut grass, musks, oakmoss, cedar and heliotropin. It shares with The Unicorn Spell a very pungent metallic violet note that rises suddenly and pierces the senses like a velvet-coated blade. I have tried to wear this four times and get to the 20-minute mark and have to remove it. I’m not sure why it unsettles me so, but it makes my skin flicker and I feel vaguely white and sweaty. Conversely I do kinda love this about it. At least it’s not a meh scent.

Now, back to Lord of Goathorn. I was born in Bahrain, and one of the most pungent smells of this peripatetic childhood was the busy fish markets. The cacophony of noise and carnival of smells was brutally overpowering and sweetly welcoming at the same time. Certain aromas, despite their power and necessary unpleasantness still rock my olfactory foundations. Memories of straw-bound rickety stalls of dried fish, hanging like torn hide in the fetid air, suffocated by salt, spices, sweat, sand, heat and perfume. A very heady experience. Piercing shots of this blasted through me as I took the top off Lord of Goathorn. Now, I am not that great with all things fish. I like the smell in context; beaches, restaurants etc, but generally it throws me sideways. I am one of those people who like their fish in cans, no eyes, fins, claws, etc. Cowardly I know, but there you go. Even on holidays to Brittany I struggle with langoustine and spider crab, home-caught fish and dredging for bones in spindly fish carcasses.

So I had a set of objections in place for this scent before I really even got past the lid. My god, the massive wave of nam pla that rolled up to greet me was quite something. Nothing had quite prepared me for that. It’s a smell I cannot abide. But in the interest of bloggerdom, I waited and then applied the juice to my wrists. Its hard to pause and wait for the piscine salinity and very vocal breath of the sea facets to settle down. But ramp down they do, with smouldering dignity and a strangely alluring song of the siren feel. Its hard to resist the pull of it actually, the top note of seaweed literally burns off with a shocking pungency reminiscent of the practice of kelp burning once common practice in Ireland, Brittany, Norway and on the Scottish Islands. This wet, sand-blasted bonfire aroma burns through Goathorn with real drama as it dries down. I’ve smelt a recreation of kelp burning techniques in Brittany and the aroma is astonishing. Ashen, molten, fishy and brutally sulphuric. Repellant and historically beautiful.

The process was used to extract iodine (and potash and soda) for use in various industries including medicine, glassmaking, photography and soap making. It was incredibly labour intensive and the industry died out in late 19th century. The ghosts of kelp pits can still be seen in Orkney and other places.

As I pondered the various contradictory odours firing off my skin, Goathorn underwent a dramatic shift into foodie territory. Not the sweetness of gourmands, but the aromas of scorched limes, salt crumbled over fish cooking over hot coals, resinous leaves burning amongst the smouldering coals. Then lemon and limes dashed across the sizzling dish. The smoke note is amazing! Almost choking, but really flavoured and rich. I love salt and the salinity of this scent is remarkable. It has the tanginess of an evening beach breeze, smoke carried through rolling plumes of fog, the lingerings of a thousand beach barbecues.

There is a fabulous whiff of upturned boats running through Goathorn. Old fishing boats, tipped up and vulnerable in dry dock, the scent of the sea drenched through the wood. A lashing of tar to protect, an accumulation of salt staining the timbers. This mingles with the smoke and lime to be almost crepuscular, a projection of dying times and dwindling trades.

The drydown is so strange, almost ghostly, just an inkling of the frankly terrifying top note remains, but the body of scent is inky dark sooty smearings on the skin drifting down to a lick of lime and dirty salt.

I can’t say I will ever wear Lord of the Goathorn, but then again I am drawn to its compulsive smoked aesthetics. I have rarely smelt anything so bizarre and complicated, repellent and progressively haunting. I know that hardly anyone is going to really try this properly, but you should. Let the bladderwrack intensity boil off and plunge into the fury of the smoke and burning limes. It’s worth the effort, it’s not a comfortable scent, but whoever said that fragrance should always be cute and comforting. We all know true comfort can be found in darkness.

For more information on Lord of Goathorn and the other new Gorilla fragrances, please click the link below: