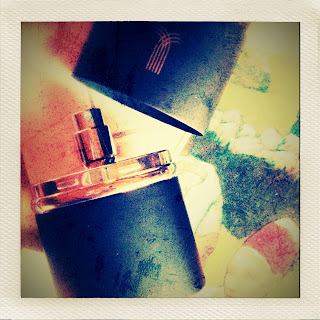 I received the most wonderful gift in the post from two new friends in Lyon recently. Fellow fragrance lovers, on holiday in Edinburgh earlier this year, we met and bonded over olfactory passions, practiced our languages and now talk in the electronic ether about all things fragrance related. They both have exquisite emotional taste in perfume and are adventurous in their desires to search out the new and unusual while remaining faithful to fragrances that anchor them to memories of their travels, home and each other.

I sent them some samples of fragrance, Penhaligon’s Peoneve and a spare bottle of my touchtone leather, Tom of Finland by Etat Libre D’Orange for B to try. My gift arrived wrapped in lovely vintage Laura Ashley wallpaper, and slightly knocked from its journey and there was a faint scent of caramelised sugar rising from the paper. Inside the box was a bottle of L’Être Aimé by Parfums Divine, a bijou niche house based in Dinard on the north coast of Brittany and founded by Yvon Mouchel in 1986.

Mouchel’s elegant and classically constructed fragrances have become quietly successful with perfume cognoscenti and lovers of scented difference. As an independant, Mouchel has control over his own business, releasing a limited number of bottles a year. Instead of following trends he is free to explore his love and passion for the drama and classicism of fine fragrance. His first creation, the eponymous Divine, released in 1986 is a sophisticated and truly elegant portrayal of woman as art. TO me she is swathed in pearls and a subtle cigarette haze with the music of Mahler playing softly around her as she stands at a window looking out in the night. It was Divine that created the scented buzz that started Mouchel’s cult following.

Originally from a cosmetics background, Mouchel was pretty much fragrance self taught, obsessed with the artistic aspects of olfactory experiences. He works with renowned noses, fellow Breton Yann Vasnier (Givaudan)and Richard Ibanez (Robertet)to create a line of fragrances that have clarity, intent and tremendous beauty. They seem to echo luminous creations of the past, while somehow remaining totally unique to themselves. This is very difficult to achieve in today’s crowded and cloned fragrance world.

This is how Mouchel views his world. Perhaps other perfumers should listen (and take notes….!) and we might be spared the avalanche of tedious smelling releases that crowd around us with the monotony of elevator jazz.

The attention to detail and commitment to quality in Divine frgrances is superb. Each of the fragrances has soul, personality and oozes distinctive style. I have sampled the original Divine and L’Homme de Coeur before. Then someone passed on a decant of L’Inspiratrice, dismissing it as too sweet for their skin. I on the other hand loved its sweetness, it translated into chocolate fire on my skin, laced with ylang, peony, white musks and tonka, all things I like in my fragrances. Also the rose note floating through was rather mournful, like a cloud passing overhead on an otherwise sunny day. Most beguiling.

My friends D & B holiday in Brittany each year and B has been wearing the masculine Divine fragrances for a while. They know my obsessive floral tastes and so took a risk buying me L’Être Aimé, but this pervasive scent showcases immortelle (helichrysum), also known as the everlasting flower, which is one of my fetish notes in fragrance. I know many people loathe its fenugreeky aroma, but to me it marries this anisic, curry aspect with a caramelized, powdered sugar aspect that just smells beautiful on my skin. It is a very polarising note but can impart a range of amazing tonal variations to fragrances, from a bitter aromatic curry scent, to damp straw, licqorice, smoked tea, sweet hot slept-in skin and the echo of Camargue holidays. I have a friend though who really dislikes the scent, she claims it smells of salted bacon!

The name immortelle refers to the fact the distinctive yellow flowers retain their colour, even when dried. I love its ambitious tenacity on my skin. It imparts heat and drama, a particular French southern sexuality that blows like the mistral across the body, dry and all pervasive. At once disturbing yet hypnotic and oddly corrosive.

I first came across it as a note in my beloved Eau Noire, created by Francis Kurkdjian for Hedi Slimane at Dior. Released as part of trio with Bois D’Argent and Cologne Blanche, Eau Noire was the stand out scent of the three. Inky dark and thick with stormy Parisian skies, I have loved it forever. I wrote about my passion for it in one of my earlier blog pieces: Liquorice and Tweed: The Scented Wardrobe. (A two part blog piece, starting with….) 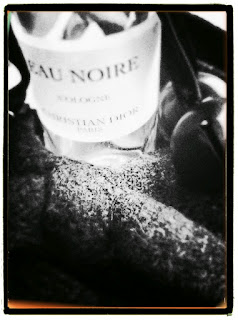 Immortelle has become increasingly well-known recently due to L’Occitane’s award-winning Crème Divine. This word of mouth bestseller smells incredible and captures the earthy, hot scent of scrubby helichrysum. Promoted heavily through QVC, more people have become aware of this transforming and singular note.

The oil has been prized since antiquity for its skin healing and reparative properties. It is said to calm damaged skin and promote the renewal of new dermal cells. I popped along to smell the L’Occitane cream again, to remind myself of the smell. The sales consultant kindly gave me a sample in a small pot. I asked her what she thought of the scent. She paused and said:  ‘Curried honey on toast’, which I thought was wonderful. Applying the cream to the back of my hand I can see what she means by the breaded facet, it rises trough a tangle of green to sit softly on the skin like toasted brioche rubbed with newly budded lavender.

Immortelle is often described as an illuminating note, sunny, uplifting and warm. In Eau Noire though I found it intensely dark and melancholy, lit by fields of burning lavender and smeared with smoky licquorice tones.

Annick Goutal’s magisterial Sables (1985) is another beautiful interpretation of immortelle, this time more salty and spicy sprinkled through with cumin, black tea, cinnamon, sandalwood and amber, creating an atmospheric outdoor, rustic ambience compared to the almost malevolent claustrophobia of Eau Noire. One can almost hear the tremble of branches, dry summer winds in the leaves, tumbling dust trails along deserted roads. It is a strong odour, verging on skanky, but pulling back at the edge, easing into a greener, sweeter drydown than might at first be imagined.

There is also the bizarre and confrontational Immortelle Marilyn (2011) by Nez à Nez, the niche French house founded by Christa Patout and Stéphane Humbert Lucas in 2005. I have to admit to loving their wacky scents, but the website is pretty rubbish. The prose they use to describe their fragrances is pompous and does the brand no real favours at all. However the perfumes themselves are beautiful and strange, created with passion, drama and a healthy dose of humour.

Immortelle Marilyn is the witty supposing of what Monroe might have scented her skin with. Despite the eternal connection of Marilyn and Chanel No 5, it has always seemed to me she might have smelt a little more daring, dirty, sweeter and downright minky. The helichrysum sits in the top of the scent and so floods the senses as soon as you inhale it off the skin. The note reeks of illicit sex, ravished by raspberry, hazelnut and a gorgeous creamy ylang note. There is helichrysum absolute in the base too, wrapped in musks. I love it on my skin, it smells both joyous and filthy, something I find very amusing. Great sillage too, floating an ambiguous hot fruitiness across my skin for hours.

The other two immortelle-touched scents I would mention are 1740 (Marquis de Sade) by Histoires des Parfums, which plays out a more creamy korma like interpretation of the immortelle over woods, leather and a wicked vanilla and elemi accord.

Like This by Etat Libre D’Orange, created by Mathilde Bijaoui for Tilda Swinton is my other recommendation, a complex and contrasting portrayal of private spaces. Gardens, greenhouses, woodsmoke, whisky, peat, the Scottish Highlands, baking etc. Elements that reflect the extremely complex personality of the actress herself. Living in Scotland, I recognise echoes of immortelle in smoke and rain, in trips to the West Coast in thunderstorms and sniffing whiskies at the Whisky Society. Married to ginger, rose, neroli, vetiver and a new pumpkin aroma-molecule, Like This uses immortelle in a transcendent way, mixing its earthiness with sweetness and a piercing intelligence. Watching Tilda’s moving and sensual performance in I am Love, I imagine the elements of Like This rushing around her in waves of olfactory delirium.

So when D & B chose L’Etre Aimé for me on their holiday in St Malo, they had unwittingly gravitated toward one of my most obsessive and quite private notes. It’s strange, I can lavish words of love and passion on tonka, vanilla, Veltol, salicylates, lilies, chocolate, fructones, beeswax and ethyl maltol but somehow my passion for immortelle seems off kilter, dirty, like a vampire’s craving for blood. It is a very unsettling note, dry and needing the blood-beat of skin to ignite its latent beauty.

It is a very French note, deeply ingrained in the scrubland of southern France and particularly Corsica, along with other varieties of plant, part of the maquis, the dense ground cover that gave its name to the Underground movement of the Second World that struggled against the occupying Vichy Government, Nazis and betrayal from within. As familiar a smell to the locals as heather is to Scots, immortelle carries its scent on the breeze like a song of place and time. Its odour of drying wood, salted skin and roasted spices seems a little alien to some noses, but to me it radiates heat and open air, the desire to fling open one’s arms and smile before falling to the earth and sleeping with fingers entwined in the soil, connected and content, smelling of self and belonging.

For more information on Divine fragrances, please click below: 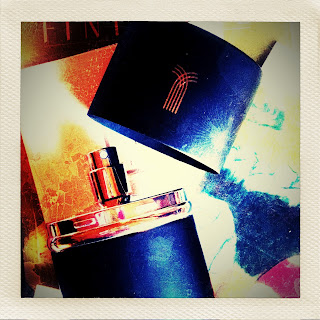