Waiting for the Rain to Take Me: ‘The Smell of Weather Turning’ by Gorilla Perfume/Lush Part II 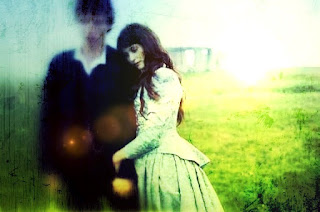 ‘In a minute or two her breathing became more regular, her clasp of his hand relaxed and she fell asleep. The band of silver paleness along the great east horizon made even the distant parts of the Great Plain appear dark and near; and the whole enormous landscape bore that impress of reserve, taciturnity and hesitancy which is usual just before day.’

From Tess of the D’Urbervilles by Thomas Hardy.

I studied Thomas Hardy at school and his novels and images have stayed with me for over 25 years. I was lucky enough to have a teacher who was obsessed with all things Hardyian and the dramatic chessboard of his Wessex countryside. She urged us to feel the weather, the scent of harvests, apples and milk, straw and earth, the fecundity of Hardy's world. She made me realise the power and persuasion of sympathetic backdrop. I was very affected by the surge of dangerous sensuality on show as Hardy’s men and women grappled with hugely complex themes of sex, death, emancipation and sacrifice.

In Far from the Madding Crowd there is a chapter called ‘The Hollow Amid the Ferns’, where the strutting sergeant Troy dazzles Bathsheba Everdene with flirtatious and suggestive swordplay. The scene is beautifully written, aching with sexual tension, both protagonists circling their desires like wolves around prey. Even the chapter heading has subtext.

‘In an instant the atmosphere was transformed to Bathsheba's eyes. Beams of light caught from the low sun's rays, above, around, in front of her, well-nigh shut out earth and heaven-- all emitted in the marvelous evolutions of Troy's reflecting blade, which seemed everywhere at once, and yet nowhere specially. These circling gleams were accompanied by a keen rush that was almost a whistling -- also springing from all sides of her at once. In short, she was enclosed in a firmament of light, and of sharp hisses, resembling a sky-full of meteors close at hand.’

I imagine the air alive with the rusty hay heat of The Smell of Weather Turning, Bathsheba’s skin moist with perspiration and excitement and Troy in scarlet, like blood on the grass, wooing her by slicing the air and touching her heart with his blade. Put the scent on your wrists and read the chapter. You will see, smell and feel exactly what I mean. The oakwood, hay and nettle are all aromas I imagine smeared across her skin. Mint and chamomile crushed between her fingers as she trails her dress through the ferns, waiting for Troy to symbolically pierce her reserve and tear apart her propriety. Bitter and sweet, sensual and contradictory. Bathsheba shatters hearts and triggers so much darkness. Like a sorceress, she manipulates the men around her for cruel amusement and is led to enlightenment by terrible tragedy.

Hardy’s gift was the depiction of despair, the eternal battle between the sexes, the love, hatred, need, sacrifice, the often terrible role that fate plays in our destinies. His dramas played out against dynamic backdrops of rain, wind, storms, heat, harvest, dewy gardens, desolation, fecundity, earth, forest, stone and water. No one has used landscape and the very fickle nature of British weather to mirror emotion quite like Thomas Hardy.

Gorilla perfumes take their inspiration from a eclectic range of sources: political confinement, the singer Karine Park, indoles, Brazilian beach parties, French art-house cinema, Leonard Cohen, abandonment, love and carnality. They all have a kind of signature, a trademark herbaceous sweetness running through them, an afterburn of smokiness like someone trailing past you with a vanilla soaked cigarette. They are published in anonymous black bottles and waxen rub on formulations. The focus is very much on the juice. Luca Turin (love him or hate him…) was mightily impressed by Breath of God and dropped it into his top 100 fragrances in a recently published little tome of personally chosen scents. This means it sits in the hallowed company of Diorella, Mitsouko by Guerlain, Bulgari Black, Angel, Après L’Ondée by Guerlain, Sarrasins by Serge Lutens, Timbuktu by L’Artisan Parfumeur and Patchouli 24 by Le Labo.

But for me, the advantage The Smell of Weather Turning has over any of the above fragrances is its raw emotion. I can be moved by the chill and palatial froideur of Après L’Ondée and sensualised by the earthy heft of Annick Menardo’s incredibly deep and biological work in the Le Labo Patchouli 24. But The Smell of Weather Turning is a different kind of experience, a personal storm. On the skin, the emotions trigger a personal climate around you, feelings and desires sparking and crackling. The rain falls as tears. Memories tumble and blur. That medicinal rubbed mint rush is beautiful. You smile. Its all about the rain.

I started this post with a quote from the end of Tess of the D’Urbervilles. I have always been haunted by the final scenes of the novel, as they come for Tess in the morning mists, the sun breaking through the monoliths of Stonehenge. She knows she is to die. The symbolism of the slab-like stones is painfully obvious. The men wait for her to wake. It hurts to read it. The quiet resignation and surrender to fate is crushing. This image of natural earthy Tess is linked indelibly to this powerful and hypnotic scent and looped back to my African storm, my teenage weirdness and isolation smashed by tropical storms. My face turned up to skies, my mind saying over and over again… let the rain take me, let the rain take me.

For more information on Gorilla Perfumes, please click below: