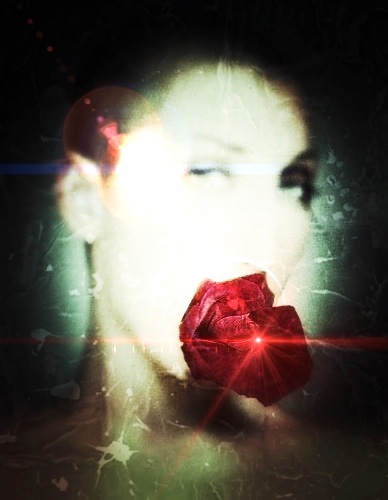 This strange and otherworldly rose scent is talismanic, designed to safeguard; ward off evil, protect you from death as you battle in the arena of love. As you suffer the effects of the poison tipped arrows of desire this uniquely twisted take on black romance will slash at life and hold you close. If you bleed it will tend your wounds, if you swoon it will stand vigil and keep you safe from harm, cradling you in cocoa and patchouli tinted beauty.

Eau de Protection was created for the cubist beauty Rossy de Palma: Almoldovar muse, actress and model by perfume terrorists Etat Libre D’Orange. It is so far removed from the usual glittering neon celebrity style perfumes that saturate the market as to be moon dust to compost. But then De Palma is hardly your average star. Her extraordinary broken beauty is defiantly at odds with our conceptions of conventional Hollywood manipulated and platicised appearances. Yet she is utterly magnificent. ELd'O also recently created Like This for Tilda Swinton, another maverick beauty who does not give a damn for convention. Like This was made by Mathilde Bijaoui who created my beloved Lily & Spice for Penhaligon’s. Like This is beautifully weird and unsettling, with a charismatic pumpkin note running through it, giving it a spiced gourd-like tint. Both fragrances demonstrate a willingness to push at scented limits given the right inspiration and muse.

Etat do not always get it right; their recent stab at a Sex Pistols scent was just dreadful, a nasty cheap smelling throwaway thing with very little thought behind it. It could have been extraordinary: a palette of metals, leather, wax, safety pin effects, spray paint, the scent of aerosols and sweaty dripping gigs. An angry bitter scent with a sweet hit of kohl rimmed nostalgia to underpin the violence. But instead it was dull and barely there, musky and faded to dull nothingness on the skin.

Rossy de Palma’s Eau de Protection is scented armour for the battlefield of love and desire. It is one of my favourite Etat scents. I love their perfumes and have collected and worn many of them including:

‘Charogne’ - fleshy and flayed, the wolf tearing out of its human host in the milky glow of a full moon.

‘Tom of Finland’ - just the most delicious sueude-tastic leather ever, sniffing Harley seats and wishing you could have fucked James Dean in Giant.

‘Noël au Balcon’ - If Santa was your boyfriend.

All of them have a hypnotic depth of something untoward, wicked and glossily pornographic. I’m not entirely convinced by the cod-erotica of the overly suggestive website. But the house has carved a distinctive and divisive niche for itself, one that reeks of styrax, posturing, balsams, jasmine, artifice and hissy aromachemical cleverness.

Eau de Protection is artfully arranged, the main elements of the perfume twisted and turned like art nouveau metalwork around the central Bulgarian rose motif. Then everything is lacquered in red to heighten the sense of alarm and sex. Parts have been blasted with light and dust, muting the effects, allowing areas of the scent to settle with tremendous style and grace. The exposed tea rose aspect of the scent is at once steely, wistful, feminine and bizarrely androgynous. The addition of ginger, a startling lick of jasmine and enormous amounts of benzoin heightens the already overwrought sense of unease the fragrance builds on the skin.

In her desire to create an ultimate rose scent, Rossy de Palma has initiated something daring and sublimely deep. Soft and needy, feminine and palpable but at the same time barbed and savage. The uncomfortable truth of love is pain. Love does hurt. Love is war. We need to protect and arm ourselves. Weaponry, charms, talismans, voodoo. The disconcerting blood note in Eau de Protection is barely discernable until you realise the world has shifted and the battle is nearly over. The ground around you is soaked crimson.

The sun is setting on a field of golden slaughter. The talismanic hoodoo, the perfumed essences, the rose-tinted bindings have held you fast, kept you safe. You have survived another day. Touching a bloodstained finger to your lips throws the lush rose into vivid focus, the pricked fairytale magic, the swoon, the sleep, the kingdoms lost in time.

The sensuality of Eau de Protection is magnificent. The resonance of the rose as it settles amid the moreish dust of the cocoa and patchouli is like the tolling of a bell in the warm heat of summer. There is a petrolic shimmer to it sometimes when I wear it, eddies of petrol in pools at gas stations, shimmering up at the sky in iridescent rainbows. Petrol chocolate rose. Only at Etat Libre d’Orange. Other times I get the weird metal notes, the rust effect of sucking blood from your finger when you cut yourself.

Rossy de Palma’s fractured beauty is confrontational and unique. On film she is weirdly compelling to watch, stylish, sensual and fearless. The same could be said for Etat Libre d’Orange. Their scents are brave and without compromise. Divisive? Perhaps. But then arguably all art should be. Controversial? Again, what is the point of creating if not to question and divide? I love their perfumes. They love me, my skin vibrates in them. Eau de Protection was my second scent. The stunning and suffocating Rien was my first and probably my favourite, although I have a terrible weakness for the suede, birch and tonka bean beauty of Tom of Finland. But Rossy de Palma’s twisted and sexy rose is soft centered and metal-edged with razor blades hidden away at the heart. Going into battle for love, what more do you want? Eau de Protection is a provocative and fearsome warrior rose.


For more information on Etat Libre D'Orange and their seductive world of fragrance anarchy, click on the link below: