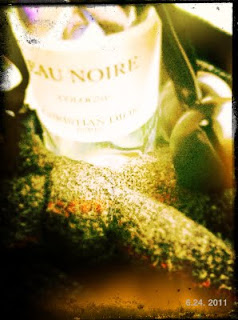 Fragrance is as important as fabric on our skin. We wear it so close. It moves with us, shapes us, defines us and can utterly change who or what we want others to think we are. So many of us neglect the importance of scent in our daily lives and the power and charge it carries. Yet we must all dress every day, some of us with care and attention to detail, others pull on utilitarian business wear with little thought or care. Some choose to blend in; others opt to stand out, demand attention, and draw the eye. It’s not easy, it’s not always natural. It can be stressful, boring, challenging and disturbing. And it can be glorious, liberating, sensual, performance, artful and life enhancing. Like a painter laying out tools of the trade, tubes of favoured colours, brushes, knives and rags; images and impressions rolling around his head, an impact to be made.

This can be done with clothes and underpinned with scent. Think of scent as your canvas primer, soaked into skin, just waiting for the final flourishes to be layered across the surface. Imagine say a businessman, a simple grey suit, beautifully cut, erotically charged by a layer of Tabac Blond under a crisp white shirt, just enough to say: I am besuited, but my heart beats to a different darker drum, come close enough and feel the rhythm. The devil is in the detail. This detail can be scent.
Some years ago I went to Paris with my lover. Paris is a city I kind of love and hate in equal measures, depending on my mood. I was loving it then, it was cold, strikingly so, crystalline sun striking low off the pavements. We walked everywhere; I was obsessed by the architecture, the light, the energy flickering through the jaded, overwrought streets. Paris is always heartbreaking at night. It is a cliché, but there is a strange sadness to the beauty, a lingering weariness that the city knows it has sold its soul and just waiting for payback. I wore tweed everywhere. I had two jackets. Two variations on green: a russety forest colour and a flecked olive. Both Harris Tweed, cut beautifully with rust red felt stitched under the collars. Photos of the trip show me wrapped in Englishness, at odds with the streets around me. I’m not sure I recognise myself now. But it is me; I know because I can smell Dior Eau Noire rolling off the photographs.


I had seen Eau Noire in a magazine and craved it like a drug. Hedi Slimane was behind the concept, Kurkdjian was the nose. The elegant metal topped bottle, the dark green juice, everything was beautiful. I just knew it would be amazing. I hadn’t wanted a scent that badly for a while.
I bought it from an astonishingly porcelain skinned woman at Galeries Lafayatte, as two louche and gloriously camp boys from rival counters attempted to lure me away with promises of  incense, ambers and patchouli. My Dior geisha flicked them away with a turn of a dangerously manicured wrist. Eau Noire was indeed extraordinary, all I imagined it would be, an olfactory punch to the senses, with texture and drama, weird emotive tensions and deep fragrant heft.
I learnt a lot about wearing fragrance when I was younger in Paris. I was taking time out from a disastrous degree course. I smoked and kissed and danced and slept my way through so many rooms, all a blur of smoke, giddy pop, ubiquitous Gainsbourg and endless dashes for late night metros. I swigged neat Ricard on trains to get drunk more quickly, smoked cigarillos and hung around with bored poor English students and fabulous French mates I gathered from random encounters in bars, parties and smoky bedrooms. Everyone got mugged, we all slept with someone famous, and we all took hundreds of photos of each over. We rolled around parks and museums, hung-over behind shades, pale and obviously not Parisian, no matter how hard we tried.
Every time I go to Paris those early years hurtle back with almost painful force. A recent trip to the Eglise de la Madéleine, brought back every detail of someone I once loved, Chanel’s Antaeus washed across his skin, catholic beeswax and leather, intoxicating me as I took pictures of him against a pillar on a foggy November morning. If I smell Antaeus I see marble and black cashmere. My eyes close at the sudden weight of the moment. He wore fragrance like clothing, choosing particular notes like accessories, not fussily, but with subtle care, imagining the effect on his skin and on those around. He was one of the first men I ever smelt wrapped in the sweet embrace of vanilla. He played this against patchouli. The effect close up was like fire on parched grass. His wardrobe was muted, limited to certain fabrics. But the key was obviously how to wear them, accessorising with flashes of yellow and orange in his case (a weakness for all things Hermes).
He taught me to wear scent in a different way. And when I left and he gave me a bottle of Antaeus, I just couldn’t wear it without memories rising like ghosts from chilled Parisian streets and whispering je t’aime in my ear... just too painful. I thought of him fleetingly as I bought my Eau Noire. Perhaps a little too obvious....sexy but a little too obvious for a married man.

http://www.ascentofelegance.com/2011/06/liquorice-and-tweed-scented-wardrobe.html
﻿
Posted by The Silver Fox at 20:58:00